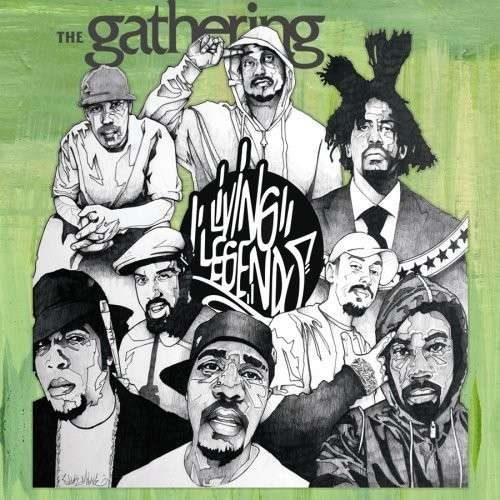 Living Legends definitely have a strong reputation in the cannon of underground hip-hop. Between them, since their inception in ’96, the West Coast collective have released a catalogue of upwards of 50 albums through solo outings and crew projects. With the kind of sustained longevity of such a group comes an exceptionally high level of expectation as well. There is no doubt that there is loads of talent between all of the rappers of Living Legends: Aesop, Bicasso, Eligh, The Grouch, LuckyIAm, Murs, Scarub and Sunspot Jonz. Back as a group for an official studio release for the first time since 2005’s “Classic”; the emcee’s in question are expected to release an EP of legendary proportions with “The Gathering”, but is the result anywhere near the status they hope it to be?

The disc runs at a misleading 32:03 between its 7-track length. The running time is bloated for such a small amount of tracks because the last track, “After Hours (Extended Euromix),” aimlessly meanders along with random banter to close. Since the EP only offers a handful of tracks, fans of Living Legends can only hope that those given tracks are each true and pure gems. Luckily, “The Gathering” seems to refer to each emcee that consists of Living Legends who have carved their own identities coming together for this release. A side note, they plan to channel the energy of Encore Studio that is the place where albums like “The Chronic 2001” and “Marshall Mathers LP” were born. And the record was mastered by Mike Lazer (the same guy who mixed Gnarls Barkleyâ€™s off-beat hit) Unlike some multiple-member CD’s, all of them actually put their good word in on each cut and they prove to care about the quality control therein.

The album starts off with the title track. The first hollow drums are reminiscent of “Good Morning” on “Graduation”, in that, they seem to be building to something more. Quickly the snaps add to the depth and the song does indeed evolve into a multi-layered space-aged romp with some driving synthetic production sounding more similar to fellow Californian underground artists Zion I, which makes sense given that a member, The Grouch, has toured with them. It proves to be a triumphant return chock-full of witty and entertaining lines like, “Way out like UFO’s, I hang out like those/Cool as an Eskimo barefoot in the snow/Iâ€™m muy caliente, that mean a nigga hot!/ They say ooh how he emcee supreme when I rock.” All too often artists that are distinguished as underground also lack character, but the Living Legends exude attitude.

Next up, the subject matter turns away from the arrogance of telling the listener how talented they are, to perhaps a cut with a wider appeal. “She Wants Me” rings in with a decidedly West Coast sound, especially when you get to the sing along hook. Again, the track is attacked with rapid fire flows as Living Legends trade off one-liners, continuously trying to one up each other and play off the previous bars. The track shows a bit of diversity and is a good listen.

The narrative of the album gets even stranger as both socio-political tracks find their way smack dab in the middle with “Pants On Fire” and “War & Peace,” respectively. Given that song order is a conscious decision, it may say something about the casual listener of rap music that these two joints are sandwiched between “She Wants Me” and the robotic “Luva Changer,” that cover less deep topics. Not surprisingly, the political message is anti-US Government, indicating that our whole history is built on lies that overshadow the meaning of true democracy. The social aspect is equally as thought-provoking, as the words pay mind to the soaring gas prices and the scale of these grand problems. The argument an avid fan would hypothetically make is that a Living Legends fan is not your typical rap fan. And such hip-hop heads enjoy a higher level of intellect to compliment their head-nodding beats. Due to mostly excellent board work from three of the members; Eligh, The Grouch and Bicasso (who cover the whole album’s production notes), we get a good slice of both.

While “Luva Changer” is an experimental work that would fit nicely with the likes of Cee-Lo, “Samba” is the weakest offering on the disc. The jittery beat and light bongo drum taps make it difficult for anyone to really get a respectable flow to match up. It is the only clear misstep on “The Gathering” EP.

“After Hours (Extended Euromix)” draws the listener back for a soft and breezy conclusion. The live instrumentals of Mark Bell on the bass and the trumpet of Josh Koslow really help differentiate this lengthy outro. One member notes, “Never really seen a black man with charm” as it flourishes into a certified banger. The type of song you want to play on your system while hanging outside in the spring. It is nice that the beat rides out for a long time upon conclusion, but there is a bit of overkill when it hits about four minutes of just talk. Nonetheless, the irony here is that these eight black men that consist of Living Legends each have their very own charm. The sketches of each individual emcee that creates the cover image indicates that they still maintain their own personal identity. That is exactly the reason why this review does not specify particular verses from them–it would be too difficult to delve deeply into the flow, skill and presence of all eight titans.

While “The Gathering” EP may not be a full serving of Living Legends goodness, it will hold the true fans over until the next full-length, which is due in the Fall. Unfortunately, it is very difficult to get eight artists together to truly collaborate in this manner and still maintain a high level of quality control. In this case, Living Legends have delivered one of the finer Indie rap releases so far this year. “The Gathering” should truly refer to the lucky fans that have the common bond of listening to such upper-tier material.