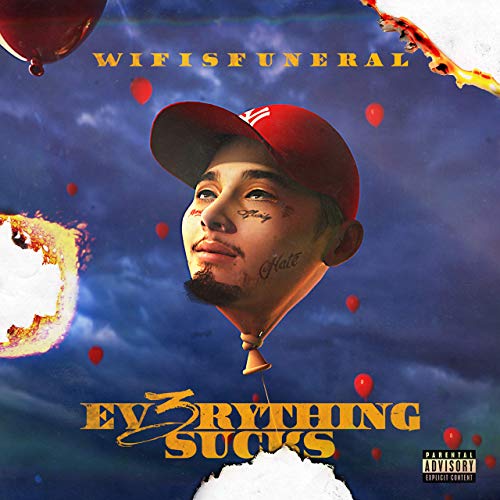 “Okay legs do the peace sign, baby lift ’em up”

Isaiah Rivera better known as wifisfuneral has not had an easy road to success. His father, a rapper in his own right, abandoned young Rivera and his mom when he was only three years old. Four years later the family uprooted from The Bronx to West Palm Beach, and five years after that Rivera’s mom and stepfather separated. It’s hard to imagine that much upheaval in the most formative years of your life is easy to swallow, but it’s not hard to imagine that Rivera tried to swallow the pain with pills. By his own admission he’s taken everything from Xanax to cocaine trying to cure his depression, and his 2017 album “When Hell Falls” was actually intended to be his suicide note to the world. Thankfully he changed his mind.

Knowing Rivera’s troubled childhood and young adulthood admittedly makes it more difficult to criticize an album like “Ev3rything Sucks“. If he felt that way it would be understandable, though it should also be noted the “3” in the title references to two “Ethernet” mixtapes that preceded it. There’s a part of me that finds it clever that his name is “wi-fi”, he released digital as opposed to physical mixtapes, yet still implied the most analog way you could possibly download them as opposed to the continual cloud of internet we all walk around in these days. The only way he could have gone further back would be to call them “300 baud” mixtapes. or maybe even “Telegrams.” I’m sitting here waiting for a rapper to release an album in Morse code now. Bet your ass somebody will.

Let’s make it clear then — I respect wifisfuneral for his hustle, I’m glad he decided suicide was not the answer, and there’s no doubt he’s thinking about every aspect of the product he’s making. In fact for a rapper who so freely admits to his problems with addiction, he’s surprisingly lucid throughout the 13 minutes of “Ev3rything Sucks“. He’s not stumbling through the beats in a stoned, slowed, sing-song syrupy style save for “What You Made Me” — but the irony is that is this album’s best song.

“All my dogs is cutthroat/my life isn’t normal” croons wifisfuneral on the track, and I take that as 100% gospel truth. The problem is that with songs this short it’s almost absurd to think of them as such. Seven tracks over 13 minutes? That’s not even two minutes per song, which is why “What You Made Me” stands out so hard at 2:34 in length. It’s the only track on “Ev3rything Sucks” that has any time to develop a vibe and absorb you into the atmosphere, even if it’s one that sounds exactly like anything you’d hear from Post Malone or Future. At least it’s something.

Tracks like “Slide” aren’t just short, they’re also so banal they make you glad of their brevity. The sexcapades aren’t interesting, the beat doesn’t have any bass or bump to it, and randomly landing on the track just makes me want to hit fast forward every time. Unless I got up to take a leak and the song came on while I was in the bathroom, there’s no way I’d listen to it on purpose. Of course with songs this short ANY song can come on while you’re doing anything. Scratch your ass? New song. Feed the cat? New song. Make a sandwich? New song. It all becomes meaningless because Isaiah Rivera has been through more than most people in his short life, and I WANT to hear about it. He’s actually spitting bars on most of the tracks, and that makes me want to hear him over longer ones with better topics. The talent is there, but “Ev3rything Sucks” is unintentionally accurate. Next time I want to hear what he has to say, not the scraps he should’ve thrown away.