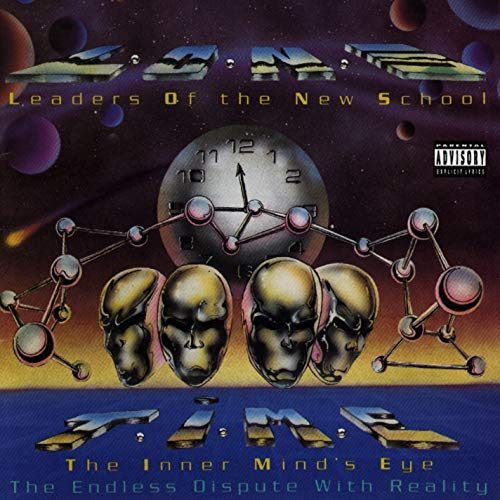 “Time! One of the deepest mysteries known to man.”

Coming on the heels of their well-received debut album “A Future Without a Past…“, expectations were high for Leaders of the New School (L.O.N.S.) to follow up with another hip-hop classic. As much as everyone involved might have wanted for that to happen on paper, there was a growing problem within the group that made that impossible. Dinco D, Charlie Brown and Cut Monitor Milo were increasingly unhappy with being overshadowed by the charismatic performances of Busta Rhymes, and to make matters worse Elektra’s A&R Dante Ross was pushing Busta Bus to go solo. This tension spilled over in an appearance to promote their sophomore album “T.I.M.E.” on Yo! MTV Raps with Fab 5 Freddy.

With hindsight being 20/20 it’s easy to see that Bus was going to wind up going solo even without internal friction and external pressure colliding to cause the group’s dissolution almost immediately after this now legendary interview. It’s also fair to say this probably would have happened anyway. While “A Future Without a Past…” was a whimsical album that explored relatable situations with their equally youthful audience — being broke and having no ride, dealing with overzealous and demented school teachers, wanting to party and have fun, relations with the opposite sex and so forth. From the album’s cover and pretentious introductory tracks it was clear that “T.I.M.E.” (subtitled “The Inner Mind’s Eye”) was completely different. Despite that the Dinco D produced single “What’s Next” tried to recapture the first album’s vibe and managed to be a breakout hit for a little bit.

Even on this song (and video) it’s telling that Busta Rhymes is first out the gate and delivers a performance that’s almost impossible to follow. The track as a whole wins though thanks to samples of The Memphis Horns’ “Just for Your Love” among others. It’s funky fresh in a familiar way any L.O.N.S. fan would appreciate and somehow managed to cleverly hide the crew’s problems from the world. In fact were it not for their highly visible meltdown on camera they might just have pulled this trick off. I have fond memories of testing the bass response of brand new Cerwin Vega speakers by playing the Sam Sever produced track “Spontaneous (13 MC’s Deep)” on loop. I’m pretty sure a few people in my college dorm hated my guts for it!

Perhaps the only member of this crowded song to survive the spontaneous combustion of L.O.N.S. other than Busta himself was Rampage (the Last Boy Scout), who would go on to be an integral member of Busta’s own Flipmode Squad. There are other gems on “T.I.M.E.” though that have been lost TO time due to the album failing to make a significant dent in the collective consciousness. Ironically enough one of those songs is the aptly named “Classic Material”, featuring a head nodding Backspin beat and solid bars from all parties involved and Charlie Brown in particular.

“C. Brown reflections of black (and!)
The shade of the lyrical, here to kick facts
Give me a hit (hit!) for the classic
elastic splastic dope on plastic
No illusion no confusion, undecided, I’m invited
Delighted, and bite it”

It also doesn’t hurt matters that Busta Rhymes goes last this time, giving everyone else their shine before he closes out the track and the beat dramatically cuts off a few seconds later. The only other song I know of that got the single treatment is “Time Will Tell” and while I can tell what Backspin was going for it wasn’t as “classic” as the previous twelve inch. In fact I’d say tracks that Busta produced himself like “The Difference” and “Bass Is Loaded” were superior by comparison, proving that Trevor Smith was versatile on BOTH sides of the board.

Despite there being things that could have worked out on “T.I.M.E.“, the assets are overshadowed by numerous deficits. At just over an hour long the album felt crammed with filler, while their previous release was 65 minutes in length yet somehow manages to fly by with each listen. Any time Milo raps on a track it’s a swing and a miss. He possesses neither the hyperactive flow of Busta, the calm and clear demeanor of Charlie Brown nor the wit and vigor of Dinco D. The group’s insistence on giving the album a metaphysical presentation and theme undoubtedly confused listeners who expected L.O.N.S. to be down to earth, which makes songs like “Syntax Era” even more odd considering it’s almost entirely callbacks to their debut.

I wanted “The Inner Mind’s Eye” to work so badly but I hate to admit Dante Ross had a point when he said “When they turned it in the first time, I knew it was wack and I sent (it) back”. That may be overly harsh given there are moments where the Leaders do genuinely shine, but the wildly uneven album is its own evidence that this group was coming apart at the seams and ready to split at any second.