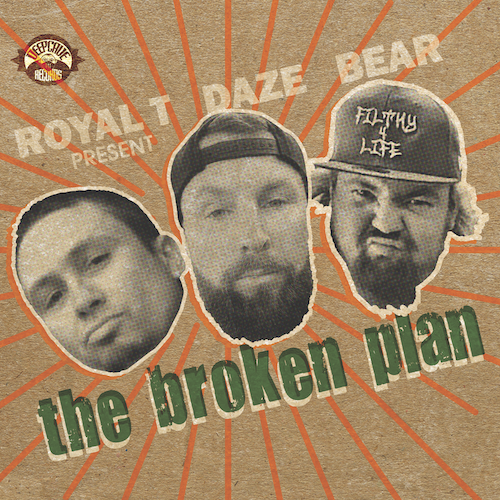 Add St. John’s, Newfoundland, Canada rapper Royal-T to the list of artists whose albums are reviewed posthumously. Even though Royal was making it as a successful rapper across multiple provinces and time zones, was a founding member of the Deepcave collective in Winnipeg, and had earned a reputation as a fierce emcee in off the dome rhyme battles, his own battle with depression and drug abuse cut his life short in 2016 before “The Broken Plan” could be released. The album is a collaboration with fellow Deepcave member Big Bear and another ex-Newfoundland artist named Daze. Hand’Solo Records and everyone else involved waited a respectful amount of time before ultimately mastering and releasing this project.

The music video for “Phenomenon” only shows Royal-T in the shadows, never clearly focusing on him and using broad gestures to simulate him rapping verses into the camera. I don’t know that they used a body double for a fact — this may simply be promotional footage they filmed for something else that got repurposed, but either way it’s the best that could be made out of the situation considering “The Broken Plan” is out now and if he was around he’d want to see it succeed. The Nevamind produced single has an understated 1990’s Native Tongues feel that bops along nicely.

Royal wasn’t shy about taking his pain and putting it on tape. In that respect he remind me of fellow Canadian rapper Madchild, who has been equally open about his own past history with drug abuse and self-destructive acts. “Lost a family, a home, everything that I hold sacred/lost my job, lost my soul, lost my passion and whole make up” are haunting words from the deceased on “Rock Bottom”. Royal-T tries in vain “to keep it all a secret from loved ones” because he “felt they’d be better with me dead than having to deal with my problems”. The Kenny Bang’em track is appropriately melancholy for this painfully introspective track, but on a personal note from someone who takes anti-depressant medication, call 1-800-273-8255 if you ever feel the way Royal-T did. Someone’s always there to listen.

Cameos are few and far between on “The Broken Plan“. DJ Dystrakted scratches the Primo-esque “Rest In Royal-T” intro and 40oz appears on “No Idea”. Even though I enjoy Nevamind’s production throughout the album (he laces 5 of 12 tracks) I found “No Idea” the least worthy of the bunch. He was going for a horny horn feel but I don’t feel like it ever clicks. It also has the unfortunate position of being followed sequentially by “I Drink I Smoke” produced by Meeves, which is a certified head nodding boom bap banger with jazzy funk nasty pianos and an imitable “I smoke, I drink, we get retarded” chorus. THIS is what I would’ve released as a first single.

The sign of a quality album is one that you can enjoy from beginning to end without feeling absolutely compelled to skip a mediocre track. Obviously with four years to prepare “The Broken Plan” everybody had ample time to put their best foot forward, but it’s still fair to say that Bear and Daze paid worthy tribute to their friend Royal-T with this release. His passing had to be heartbreaking for them, but at least his friends and loved ones can know some part of his dream goes on even after he’s gone. Whatever comes next from the remaining members of this trio will build on his foundation.