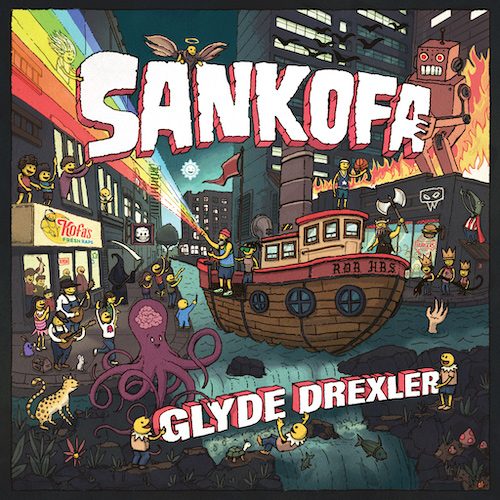 At times I worry that I’m over-explaining cultural references that pop up in my album reviews. That’s when I have to remind myself that I was born and grew up in a completely different generation from a lot of today’s rap listeners and hip-hop artists. Fort Wayne, Indiana rapper Sankofa is closer to my own timeline, so referencing NBA legend Clyde Drexler in the title of his latest album “Glyde Drexler” is instantly obvious to both of us and may fly far over the heads of everyone else. This era’s rappers would probably name their album after Kawhi Leonard, Kyrie Irving or Zion Williamson.

Speaking of titles though I instantly laughed when I saw Sankofa called one of his tracks “Just Another Rapper With a Money Song”. I don’t hate on rappers for bragging about their bands and racks, just the lack of lyrical creativity that goes into some of their material. What can you say about the funds you make or how obsessed with accumulating wealth you are that hasn’t already been said by every other emcee? Sankofa is well aware that it has become a cliche and attacks it right at its core. “Money makes the world go ’round/Chasing its tail until we all fall down, now/it serves a purpose but when wants become the needs we need to reconvene and seek the meaning beyond seeking recent purchase”. It’s thoughtful, clever, and one hell of a tongue twister to boot. Combined with a laid back piano track and a classic AZ bar scratch (“and my mentality is money orientated”) it’s one fly-ass track.

“Artie Bops!” also lives up to the name. The “ha ha ha” sample sets it off right away, the drum track is so crispy I’d suspect J-Zone was playing it live, and the background music glues it all together as Sankofa spits verses that are clearly about his son.

“You know how many people beyond your family love you?
And sometimes, even as adult life, it can suck dude
You’re driven and intelligent, passionate and eloquent
with a orally knack for taking language or a hellish bent
You and Walter remind me of you and your Uncle Matt
A battlefield, under which I hope you find a tunnel back
He idolizes you in ways you think is murderous
Proof that so much of life is how you will interpret it
You don’t wear your heart on your sleeve
Man your heart is your arm and it started to bleed
May time thicken your skin but not make you numb
Then again a little bit of skin is better than none”

Sankofa’s aesthetic has been and continues to be to make songs that are personal, professional, polished and proud. He’s not humble about the lines he writes or the deftness with which his tongue can spit them, but he’s also humble enough on “Toy Box” to say “I dedicate this to all the raps I wrote and didn’t record/sitting, on a piece of paper waiting, for their turn at war”. He nimbly toes the line between confidence and cockiness, much like Clyde the Glyde would deftly step around opponents before throwing down a monster tomahawk dunk.

This description can of course apply to many great emcees from Aceyalone to Nas, but if you were making a “Dream Team” for the Rap Olympics, Sankofa probably wouldn’t get the call. It’s not because he’s not deserving — far from it. It’s because he’s Sadaharu Oh of hip-hop — an all-time great who is barely even known to hardcore sports fans because he never spent a single day in Major League Baseball. The thing is I’m not sure he’d fit in the “majors” of rap. He’s not the kind of artist who belongs on Def Jam, Universal or Empire. Signing a deal to join one of those teams would involve the kind of artistic compromises that would ruin songs like “Convertible Hearse”. Sankofa’s “staking my claim and planted a flag/broken down to elements” like a hip-hop chemist boiling rap down to its purest essence. The jazzy fat nastiness of the pianos and Mobb Deep sample hook give the song an ill feel that most commercial rappers just can’t touch.

“Glyde Drexler” presents the ultimate conumdrum for people who love dope beats and rhymes but also want to be holier-than-thou “my taste in rap is better than yours” asshats. It may be fun to know something other people don’t, but keeping the secret of Sankofa to yourself is the reason he nearly went into permanent retirement from the rap game. I’m glad he changed his mind but I also hope to change YOUR mind if you’re (A.) skeptical that he’s really that good or (B.) know he’s that good but don’t want to share. Yes he is, yes you should, and unlike most rappers with a money song, his doesn’t make you feel lesser or poorer for listening to it. I’m not saying all rap needs to be uplifting, but in these troubling times it doesn’t hurt to have an emcee you can relate to as a human being and not as a rap celebrity.