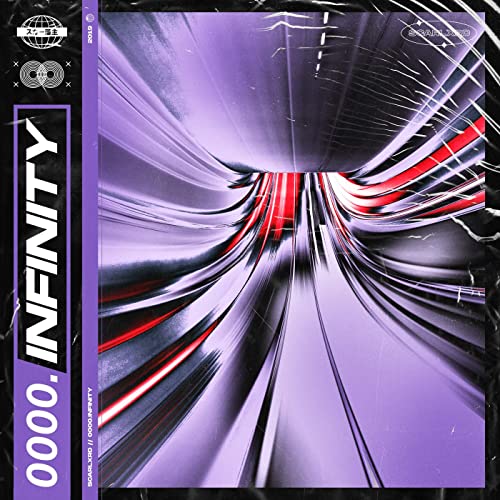 After watching a documentary recently about outsider music, I decided it was time to seek out another such artist in hip-hop for coverage on RapReviews. This is not something we’re new to here. We’ve got decades worth of album reviews on the website, and among the mainstream major label and small boutique indie label releases, there are bound to be a few that fall completely outside the purview of either music industry standard. As you might expect by the fact these square pegs don’t fit neatly into rounded holes, their music ranges from absolutely awful to brilliant. If you’re not afraid to record your kind of music your way without any input from anybody else, you’ve earned the “outsider” label regardless of what the end result may be.

In choosing scarlxrd’s “Infinity” for review though I committed the cardinal sin of trying to make an album fit the narrative I had imagined. Initially the former YouTube influencer turned “trap metal” rapper seemed like the perfect choice. His sound is certainly unlike anyone else in the industry right now. The closest comparison might be if you took the hyperactive energy of early DMX or Sticky Fingaz and then told them not to bother rapping; instead get as close to the microphone as possible and SCREAM AT THE TOP OF YOUR LUNGS UNTIL YOUR THROAT IS HOARSE. The all caps like Daniel Dumile is absolutely necessary when listening to songs like “HXW THEY JUDGE,” which he himself emphasizes with uppercase delivery that never once comes down from the edge of lunacy.

Other critics have compared the intensity of his style to Nu Metal screamers like the late Chester Bennington or Slipknot frontman Corey Taylor. I can see where they are coming from, but both of these men are perfectly capable of gently singing when they want to, and I don’t see anything from scarlxrd that indicates he has the desite to. He’s purposefully and professionally abrasive. He revels in being “BERZERK” and the large following he’s amassed in recent years does too. This is music for a mosh pit if and when everybody is sufficiently vaccinated and caffeinated to throw bodies at each other with abandon.

That whole “large following” thing though is why scarlxrd fails to meet the definition of “outsider music.” You could amass tens of millions of views, spins and units for going viral one time with one weird track or album, but scarlxrd has demonstrated the kind of consistent staying power that got him signed to Island Records. “I don’t give a fuck about contracts” yells the young man on the track “HEAD GXNE,” but (and I sincerely mean him no offense by this) I doubt he turned down the offer they put on the table for releases like “Infinity.” He’s definitely living more comfortably now than any of his previous attempts to go viral on YouTube ever afforded him.

That too is where the “outsider music” narrative fails once again. Outsider musicians often get only fleeting glimpses of mainstream success, and due either to their repulsion at the gaping maw of capitalism or their own mental illness making them see it as demonic, they quickly retreat from that world and go back to making cassettes and compact discs in their own home studios. “Infinity” has that undeniable major label polish to it, the sheen of a restaurant dish that has been basted in butter, a taste that’s not weird or sour enough to elicit a strong response. That’s not to say I don’t enjoy his screaming fits or the grimy beats that accompany scarlxrd’s delivery. In fact I enjoy it quite a bit. The problem (if it even is one) is that this is manufactured rage rather than a heroic outsider’s primal cries.

In the end scarlxrd is what happens when a major record label co-opts the sound of rage and packages it in a format tailor made for profit. Is that evil? If you feel that way then you’d probably have to re-examine your love for Public Enemy or Rage Against the Machine too. Musicians have their own moral compass to steer them, often using the position their fame affords them to advocate for justice, and using the proceeds they make to support worthwhile causes. I don’t know what scarlxrd does and I’m actually not that concerned with it. I’m only going to tell you that “Infinity” is carefully crafted to make him SEEM like an outsider when he’s the furthest thing from one that he could possibly be.