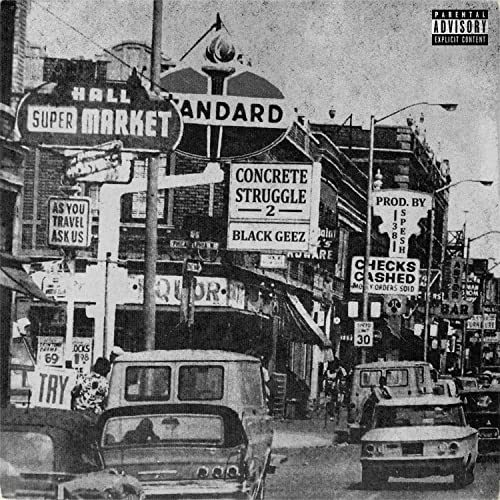 “Applaud — this is the last hoo-rah.”

By his own account (I have none to contradict it) Black Geez did a nine year bid for a crime he didn’t commit, and after maintaining his innocence the whole time his conviction was reversed in 2015. The Rochester, New York resident celebrated his freedom by kicking off a rap career he was hoping to start back in the 2000’s. I missed “Concrete Struggles” when he got out, but he’s already on “Concrete Struggles 2” in 2020. “And now that I’m free, I’m never slowing down” quips Geez on the 38 Spesh produced “Organized Crime,” a song that can’t resist hinting at his past life by rocking samples of James Gandolfini (R.I.P.) from The Sopranos amongst other mob clips.

Geez feels like a throwback emcee dropping “Eric B. & Rakim” references, which may be in part to that long time he spent incarcerated, but he relishes it when he vows “to bring that old thing back” on the title track. He sounds like a gravelly, upstate New York version of Kool G. Rap sans the lisp, and relishes talking about “this thing of ours” like he runs the black mafia. At the same time he recognizes the code of the streets doesn’t necessarily help you eat, rhyming “I keep on bombing while you grimy-ass niggaz keep on robbing” to emphasize that he enjoys living legal as an artist.

It’s should therefore come as no surprise that 38 Spesh worked with the aforementioned G. Rap on an album, so what we have here is a unique opportunity for a producer who understands grimy NY street rap to work with a man who could be G. Rap’s protege. The result is melodic tracks with story-telling driving lyrics, painting a picture of “Glockchester” that makes it as rugged as any hood anywhere in the country. Even though this could result in cliched bars if not done carefully, lines like “came from the era of the human beat box” remind us that Black Geez respects the five elements and the hip-hop music he’s making.

The piano ivories tickled on “What I See” are the perfect outro for “Concrete Struggles 2,” an album that clocks in at only 29 minutes but somehow feels much longer than that (in a good way). “Real talk, I’m scared of that other side of me” is how Geez reminisces on his past, knowing full well that even if he was wrongly convicted, he wasn’t exactly living right before his bid. That desire to never go back means Black Geez can tell you about “the life” without having to actually do it. Too many rappers get record deals them suddenly decide to get grimy to just to prove a point, and end up doing bids for armed robbery or attempted murder. I respect Black Geez because even if he’s reminiscing about his past life, he’s looking forward to being an emcee instead of an inmate.