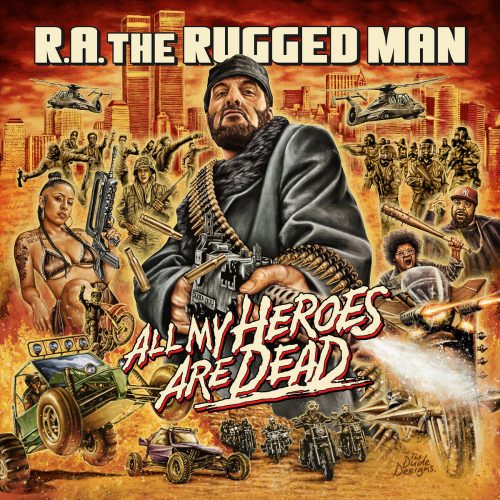 RA the Rugged Man :: All My Heroes Are Dead

If you know the name, you know what you’re in for. Wild tales of debauchery and record label politics, delivered in a relentless barrage of rhymes. Self-deprecating, dark humor courses through his veins just as much as 90s hip hop tradition, but the common fear throughout Rugged Man’s career is eerily close to his most famous co-sign Biggie Smalls: Death. Whilst Big was “Ready to Die”, understanding that his drive and ambition would stop at nothing, there was always an underlying paranoia running through his best songs. RA’s records tell a slightly different story, highlighting his reluctance to die. 2004’s “Die, Rugged Man, Die” was a response to a decade of being blackballed, but the perennial cockroach that he is, he refused to go away. It’s an album that’s held up well, sitting awkwardly between the Rawkus Records era Rugged Man and the post-“Uncommon Valor” Rugged Man that introduced him to a new generation of rap fans. Listening back to it in 2020, “Die, Rugged Man, Die” is still a fantastic record that should sit in any rap connoisseur’s collection.

Then you have “Legends Never Die” from 2013, one of the best records that year, helping cement RA’s place amongst rap’s elite emcees. I gave it an 8/10 that year and stand by that. It’s been seven long years, but given Rugged Man’s reputation as a natural performer, he’s kept himself busy touring and delivering his trademark song-stealing guest appearances along similarly lethal lyricists like Locksmith and Vinnie Paz. He’s also got young children to keep him in check, but if you think that’s going to tone down the legendary loser, you clearly haven’t listened to his latest album.

RA’s trademark humor is everpresent, with lead-single “Legendary Loser” a fun jab at his own career that still somehow manages to be encouraging to any younger artists. The refusal to tone down is refreshing in an era of snowflakes and Karens, but his ability to poke fun at everybody, particularly himself, is a quality few emcees manage to nail. “Hate Speech” is predictably confrontational, yet demonstrates how absurd 2020 is considering this song wouldn’t make sense if it was recorded twenty years earlier. When part of your identity in hip hop is being a controversial figure – and everything causes offence – it’s a unique situation RA finds himself in and would be great to hear him expound further. It’s something that Eminem has struggled to adapt to, often spouting cringe-worthy try-hard remarks that simply make him feel like an out of touch dad – something RA embraces yet somehow avoids. This is addressed on “Golden Oldies” alongside Atmosphere’s Slug as both emcees laugh at how old they now are, continuing to dance to Salt-N-Pepa in the mirror whilst dressed like Kid ‘n Play. These nods to hip hop history are a constant theme, and that obsession with the art of emceeing is championed on each track. This is the guy who doesn’t want fans that don’t know who Kool G Rap is.

Much like Vinnie Paz, RA’s best songs are his forward-thinking performances tackling personal topics like addiction, trauma and family. The story of the school shooter was recently tackled by Eminem (“Darkness”) but RA’s “Angelic Boy” is a potent explanation of how and why these shootings are still happening. It also mirrors his classic performance on Jedi Mind Tricks’ “Uncommon Valor” by highlighting how what was previously the scenario only seen in international warzones is now so commonplace in the United States’ schools that it’s viewed just the same. If I only see it on television, then it doesn’t affect me. Case in point: South Park’s episode “Dead Kids”.

“First Born” is RA the Rugged Dad in full flow, with a wild final verse giving agreeable (if over-the-top) parental advice sure to strike a chord with anyone that has a daughter. The very notion of parenting advice from RA the Rugged Man is money. A YouTube channel of RA’s teenagers listening to his records would be the next iteration of “Kids react to the GameBoy”-type of videos currently doing millions of views, and I’m here for it.

Another highlight is “Wondering (How to Believe)” which Classified produces. The David Myles hook is even better than their work on 2016’s excellent “Work Away” with RA highlighting how many fucked up situations people go through (children dying, rapists, heroin addiction), but more importantly, admiring the strength of anyone going through the repercussions and knock-on effects these have.

“Contra-Dictionary” isn’t an alphabetical list on how to gun down enemies in your favourite retro videogames (although that would be still fun to hear); RA instead shares examples of contradiction over an ILL Mr. Green beat and Locksmith, one of the most talented emcees in the game, comes through with a great hook.

The line-up on “Slayers Club” must be one of the biggest and best in music history: Ice-T, M.O.P., Brand Nubian, Onyx, Chino XL? Good Lord! Inevitably, it doesn’t quite match the lofty heights of the featured artists’ best work (we’re two decades removed from their prime, after all) but the little touches on the beat that are custom-made for each verse are appreciated. It was all a bit too stop-start to really pop off like it could have, something “Dragon Fire” doesn’t suffer from. Ghostface Killah’s verse is wild and G Rap does his thing, but Masta Killa for me stole the show given he’s not as active as the other emcees and maintains that nonchalant delivery even on a beat as fast as this.

Another feature that stands out is Immortal Technique on “Who Do We Trust?”. That booming voice hits like few others, and you can feel every word like Tech’s classic performances on “The 3rd World” or “Revolutionary Vol. 2”. Speaking of which, where the fuck is “The Middle Passage”? My only guess is there are constantly new themes to rap about and Tech’s constantly creating new ideas.

So far, this sounds like a great album (and it is). But there are times where the rappity-rap schtick holds a track back. A-F-R-O is an emcee I’ve never really felt as his style is simply rapping as fast as possible without really saying anything. Planet Asia would love it. When used sparingly, it can be an impressive skill (particularly when telling a story) but it ironically spoils a dope Jazzy Jeff collaboration on “Gotta Be Dope”. RA has a loyal fanbase of educated, seasoned listeners that appreciate the perspective of an older ear, but the relentless namedropping of legendary artists from the 1980s does wear thin and come across dismissive of the talent that’s around in 2020.

RA may feel (and know he’s) old and out of touch but this record is proof he’s still a force to be reckoned with. The “Hobo With a Shotgun” cover art is apt, not just because he’s an old-school character seemingly dropped into a world that’s weird and depressing, but his words are weapons and RA’s still that reliable rapid-fire machine gun unloading rhymes at a relentless rate. This is his most accurate assault yet and further proof that an artist can get better with age.

RA the Rugged Man :: All My Heroes Are Dead
8.5Overall Score
Music8
Lyrics9