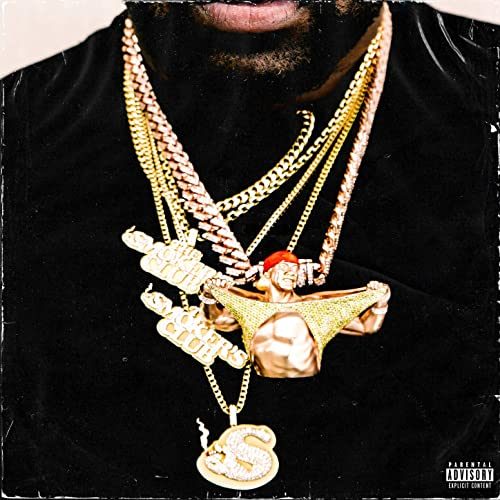 A Closed Mouth Doesn't Get Fed

The cliche “your favorite rapper’s favorite rapper” gets thrown around a lot in the biz but applies as well to Smoke DZA as any other New York rapper. He’s been a staple of the scene since the early 2000’s and drops a new official release every couple of years like clockwork, to say nothing of unofficial mixtapes and one off EP releases. It probably doesn’t hurt that he has a memorable nom de plume either. There’s a million “Lil’ Big” and “Yung O.G.” type rappers out there, but Smoke DZA sounds like a cross between Wu-Tang Clan and Wiz Khalifa. Standing out in a crowded field never hurts.

“A Closed Mouth Don’t Get Fed” is the latest edition in DZA’s long and consistent career, and he smartly declares himself “underground lord of the rap (web) sites” on “Rules” featuring Tish Hyman. Don’t hate on him for playing to his audience. He knows who he is and what fan base supports him the most heavily. With a voice that has always hewed toward Fabolous vocally and Jadakiss lyrically, there’s no doubt the Harlemite understands the expectations of the people who have been riding with him since day one. The instrumental has that old school Kanye West feel of sped up R&B vocals wailing and crooning met with hard bass and drum hits, and to quote another cliche “if it ain’t broke don’t fix it.”

DZA is also savvy enough to recognize that a new generation of “your favorite’s favorite” rappers came along over the last decade and extend an olive branch to them to collaborate. That results in Westside Gunn appearing on the laid back opener “Morse Code” and Flipp Dinero being in both the song and video for “Praying For My Soul.” We don’t often talk about the directors of clips, but give it up to Diretto da Rook for finding a way to get it done with a minimal amount of risk to all involved thanks to clever editing. You can even spot them sporting their pandemic approved masks between takes of lines like “+Feel So Good+ bring Ma$e hook back.”

DZA doesn’t just stay in his NY lane for the whole album though. He branches out by featuring T-Pain’s trademark warbling on “Dark Web” and fellow grappling fan Wale and his fellow D.C. artist Phil Ade on “Fiscal Thoughts.” Admittedly this still keeps things in the Eastern part of the U.S. geographically, but Smoke DZA walks that fine line between bringing more people in and delivering what his old heads have come to expect. That’s where songs like “96 Knicks” featuring Dave East fit — he’s a “retro New Yorker” by definition and by lyrical choice. Those Knicks fell apart in the Eastern conference semifinals, and neither they nor the Heat really had a chance against the Bulls of that era, but I can certainly understand the nostalgia. As the intro says, “Never fuck with a winning streak.”

That’s true of “A Closed Mouth Don’t Get Fed” in general. Smoke DZA only takes calculated risks, knowing there’s an army of support for him that will ride on each release, so as long as he makes the right moves he’s always going to win. I think that’s also what frustrates me at times when it comes to DZA’s work. The talent is self-evident when listening to him flow, and from Harry Fraud to Pete Rock, he always chooses the best producers to enhance the bars musically. It’s always a winning combination but just like those ’96 Knicks, something keeps them from going all the way to being remembered as all-time greats. Consistency garners loyalty but greatness comes from boldness. Nobody told Jay-Z to work with Linkin Park, and a lot of his fan base may have hated it, but he bet on himself and took that chance anyway. Did it pay off? Look at where Shawn Carter is today and ask that again.

As good as Smoke DZA is and always has been he needs that moment where he bets it all on himself and does something outrageously unexpected. Until then he’ll always be your favorite rapper’s favorite rapper and little more, but at least “A Closed Mouth Don’t Get Fed” delivers another solid effort.