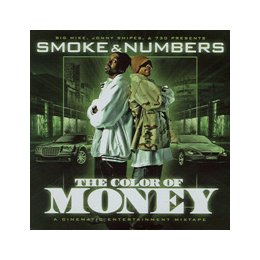 Smoke & Numbers :: The Color of Money

A month ago, in an effort to crack down on the mixtape market, the Recording Industry Association of America sent the NYPD to raid Mondo Kim’s, a popular independent retailer, for hundreds of CD’s, arresting five employees and charging them with trademark counterfeiting in the second degree. The RIAA’s rigid “zero tolerance” approach is blind to the fact that in hip-hop, the mixtape format is widely accepted, because it has turned into an indispensable promotional tool. As such it became another gimmick exploited in the worst way, but that doesn’t change the fact that mixtapes are an important – in some cases even internationally recognized – platform for rappers. For many, the mixtape circuit is today’s way of paying dues. For others, who might have already caught a glimpse of mainstream fame or are more or less headed straight towards it, mixtapes are supposed to help them stay connected to the streets. For some it is a way to actually make money off their music not hindered by contractual obligations and release schedules. Mixtapes are also the medium where rivalries are played out in front of an audience expecting to be entertained by exclusive bits and quips. Since mixtapes are by definition quick and dirty, it is feasible that not all the legalities are always taken care of properly. Samples are probably not getting cleared for just a mixtape placement. But it is safe to assume that a great deal of the CD’s seized in the recent raid had been approved by artists and labels, simply because they’ve long realized that mixtape appearances can create a buzz more effectively than many other promotional measures.

One mixtape the RIAA needn’t worry about is “The Color of Money,” which merely presents itself as a mixtape, but contains brand new, exclusive material by one act only. Host Big Mike even calls it Smoke & Numbers’ “debut mixtape.” That should be reason to celebrate for the duo of Smoke DZA and Numbers, yet brings us to an entirely different problem than possible piracy. Up and coming artists might want to consider the following. The more professional your product sounds, the more urgently the question arises why it can’t sound completely professional. Several tracks on “The Color of Money” not only hint at a great potential, they are potentially great. What prevents them from being great is how they sound. This is not a matter of sound quality deteriorating with every dub made, the way it used to be with real tapes, it’s a matter of people putting in some serious work that is not fully reflected by the final product. If the finishing touches are all that separates mixtape from album, I know which one I prefer.

I could care less if I felt “The Color of Money” had no redeeming quality whatsoever. It irks me, however, to witness material that simply deserves a better presentation. Even moreso as on the CD’s better tracks, you can hear Smoke & Numbers putting a lot of effort into their own presentation. But as it happens, sound quality issues affect rappers very directly, at their very own performance. In a situation that marks your full-length debut (even considering the understatement that lies in the term mixtape), rappers are running the risk of getting dismissed early on because they fail to make a good first impression. Upon initial listening, to me Smoke comes across like a lesser Big L, and Numbers like a lesser Meeno (of Harlem World). Charisma has a lot to do with vocal presence, and if that presence is jeopardized by an inferior sound, your flow has to be twice as sharp, your lyrics have to be twice as witty. Which is not always the case for Smoke & Numbers. Much of their lyrics are the standard polysyllabic drab you’ve come to expect from New Yorker mixtapes. Their rhymes often possess a humorous undertone, but they lack the originality of, say, The Diplomats. If there are any high-flying references to apply to Smoke & Numbers, it would probably be Lord Tariq & Peter Gunz or mid-’90s D.I.T.C. when they decide to join the smart set, and Thug Life or Capone-N-Noreaga when they decide to get gangsta.

They’re off to a fairly good start with “NY Minute,” an anthemic track with recycled horns that would have been called jiggy in another era. Smoke reps hard, trying to “holla at at you / straight from the Rotten Apple,” “the thoroughest / world famous city to get attacked by terrorists.” “You make it here, then you can make it anywhere / Money everywhere, cops, don’t many care / Yeah NY, if you feelin’ me / I’ma carry the torch like the Statue of Liberty.” For those of us who have been away from New York for some time (figuratively speaking), “The Color of Money” is prone to welcome us back like Mase with its distinct New York vibe. In the words of Numbers: “Word to Bloomberg, son so live / I’m Hot 97, Power 105.”

They proceed to build their rep with a number of songs about street cred, or lack thereof. “Super Negro” and “Straight From the Streetz” call out wankstas, Numbers playing the front with lines like “I had a gun in hand / when Kid ‘N Play was kickin’, spinnin’, doin’ the Running Man” and “Call my gun N’Sync the way I pop artists / I’m hot retarded, you a dumb fuck, not the smartest / you probably snitch, then drop the charges.” Informers get specifically dealt with on “Snitch,” one of the CD’s highlights. Over a sinister background Smoke & Numbers conversate like a true rap duo, discussing (so-called) snitching in great detail. If they’d be able to preserve that chemistry, they might come up with quite potent stuff in the future. “Strapped” is probably not the way to go, as Numbers tries hard to be reckless and relentless but only comes up with g shit nobody would have get excited about when gangstas made the rap world go round 10, 15 years ago. The track’s only saving grace are the Pac movie samples. Musically and lyrically more impressive are “Man Up,” a slowly creeping but hard-hitting track by Digital Product, and the cinematic posse cut “5 Problems” (f. Murda Mook, Firm, Shan Shizzy).

In terms of production, “The Color of Money” is promising, offering good arrangements heavy with strings, horns and pianos that build enough tension to render Smoke & Numbers’ rhetoric even more dramatic. “Straight From the Streetz” boasts an entire repertoire of props – police radio, shutting cell doors, a flurry of buckshots and a “How to Rob” quote, the track saturated with a gloomy hum laid on top of it. But again – with the necessary finishing touches, the dark beats would sound even more intimidating, the anthemic beats even more engaging. One track that’s absolutely ready for (club) consumption is the Digital Product-produced “True Stillz” (possibly meant to read “True Skillz”), a marching band in mardi gras mode hip-hopped out with a touch of Swizz Beatz. Here that New York professionalism shines through, showing Smoke & Numbers apt at the long-cultivated artform of moving the crowd. Hopefully, this won’t remain just another mixtape joint. The team-up Smoke & Numbers/Digital Product also scores with “Boom Bap,” laced like something Original Flavor would’ve done back in the day, a swinging tune that inspires the rappers to name-drop Duke Ellington and Billie Holiday, but also to disclose their own influences:

“[Numbers:]
Same old song plays over new speakers
same old school with new teachers
[…]
I was born on KRS, and Rakim, and Chuck D
that nigga Ice Cube, khakis and Chuck T’s
[…]
[Smoke:]
I grew up on Run-DMC
Pete Rock, CL Smooth, EPMD
And it’s about to get ugly
I’m the next best fresh nigga to come out of Harlem since Doug E.
That’s my word, I’ll emerge the best
cause I’m a Funky Technician, nigga – Lord Finesse”

At the end of their “debut mixtape,” Smoke & Numbers have done little to live up to the abovementioned giants of hip-hop, but have tried hard to blend into the crowd of contemporary rap acts, down to the requisite reflective songs towards the end (“Smile,” “The Habits,” “5A”). The verdict is still out on whether they can command the same charisma as the top dogs, but once they will debut officially, a more professional sound will surely expose their weaknesses and reveal their strengths.