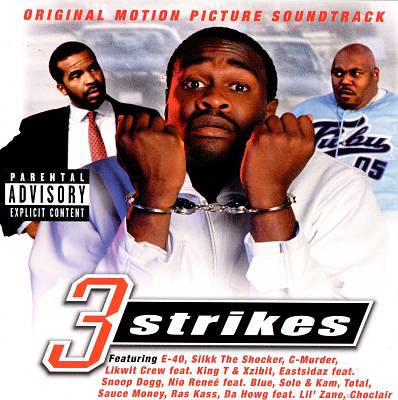 Swing batta batta, SWING! Next up at the plate is Priority Records; and they’re out to homer like Sammy Sosa with an all-star lineup that stretches from where the Blue Jays play to the friendly Dodger confines of L.A. DJ Pooh is obviously the power hitter – he wrote the script for “3 Strikes” the movie, executive produced the soundtrack, AND produced three of the album’s twelve tracks. Talk about puttin in work!

The question is of course whether Pooh could shoulder that trifecta and connect for a triple or if he’d go down swingin like facing a Pedro Martinez fastball. Pooh called in a couple of pinch hitters for assistance though – the already released “G’d Up” by Tha Eastsidaz and “Let’s Ride” by Choclair provide two guaranteed sure shot hits. For those who might not by either of their albums, you’d be well advised to pick up this album on the strength and save $13.99 because both are bouncy swingin hip-hop that makes inroads without crossing over and going pop.

Other batters in the lineup vary in consistancy from Tony Gwynn to Benny Agbayani. It’s not surprising that Tha Alkaholik fam is crushing the ball on “Where Da Paper At” with the welcome return of King Tee and a well placed Biggie sample; but the always spastic Silkk the Shocker does not impress on the Rico Lumpkins (YES, really – Lumpkins) produced “Where Dey At”. Ras Kass is as lyrically versatile as ever on “West Coast Mentality” but Poli Paul’s beat is a hair or two above mediocre. Kass will continue to ride the bench as a utility player unless he has the likes of Premier and Diamond D in the bullpen for the save.

The album’s biggest surprise may be Solo and Kam’s duet “Where I Come From.” Kam has been playing the field for years in L.A. and is a perennial underground favorite for his politically charged appearances on songs like “Bulworth” but here trades up some of his sharper barbs for an anthem that is surprisingly universal. The beat by Pooh is definitely a Wessyde lowridah but the hood they rap about is to quote Kam “the same place you from; ain’t no if’s and’s or but’s.” It may not be as catchy as Black Rob’s “Whoa!” in the longrun but it’s predicated on the same type of repetition and actually scores more in the cleverness department.

With decent representation elsewhere by Sauce Money, E-40, C-Murder and Total, the album’s only two seriously faded mistakes are Silkk the Shocker’s song and a duet between Lil’ Zane and Da Howg that jacks the exact same beat as D.I.T.C.’s “Champagne Thoughts”. On the whole Pooh has fielded a winning lineup that’s at least good enough to take the pennant, if not the World Series.