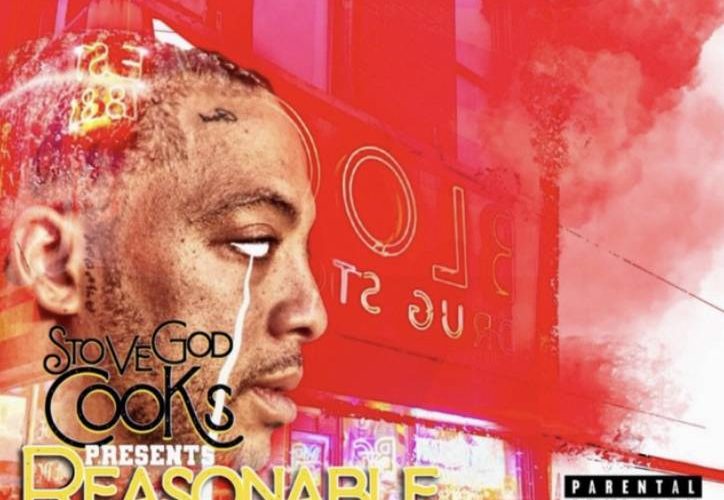 Barely a week goes by where I’m not citing Roc Marciano as an influential figure on a buzzworthy artist, but this week it’s impossible not to mention him. Produced entirely by Roc, Syracuse (New York) emcee Aaron Cooks, previously known as Cook$ and now Stove God Cooks, is an actual protege of Roc. He was heard most recently on the album “Marcielago” where he killed his verse on “Puff Daddy”.

If you’re dropping a debut album produced by Roc Marciano, and naming it with no fear of Jay-Z’s lawyers knocking at your door, you need big cojones. Given this record released back in March, many are already aware this is a very good record, with some even proclaiming it Album of the Year material. I can’t speak for other writers, but the reason I prefer to write about a record months after release is that I’ll have listened, processed and digested it all, hopefully avoiding release-day furore and inevitable bias that something new and fresh has saddled to it. Proof of this is how wild social media was when “Alfredo” dropped, but months later there’s now a more lukewarm reception surrounding it as we all come to terms with it being nowhere near as great as Freddie’s two Madlib albums. That’s another topic for another day, but the Cooks and Roc combination is another calculated success from Marci Enterprises and Busta Rhymes’ Conglomerate Entertainment.

Surely it’s more of the same game-spitting bravado and 70s soul samples we know and love from Roc Marciano? Kind of. Cooks raps with hunger and a fire in his belly that sets this record apart. A lot of emcees have adopted the conversational approach to rap, drearily talking their rhymes as if less effort equates to an effortless style. The production often feeds that narrative, but “Reasonable Drought” does benefit from Cooks’ in-your-face approach – each verse is delivered with the ferocity of a battle rapper. “Reasonable Drought” manages to have an emcee going in over some surprisingly smooth instrumentals.

“Cocaine Cologne” alone is rife with memorable lines: “What good is living when you’re dead inside?“, “I’m up under this money tree like finally it’s Autumn”, “I got God tattooed on my face, so when you see me, you see that”. I was never a big advocate of Roc Marciano’s drumless beats but with Cooks’ harmonizing on them, it sounds so much better.

I like the heightened sense of fan-service here too. References to countless rappers, songs or films are littered throughout songs, yet never panders to the listener. Pete Rock, Birdbox, 50 Shades of Grey, Dr. Dre’s Detox – and that’s just ONE verse on the standout “Lava Lamp”. It meshes the influence of Drake and Wu-Tang perfectly. Drake is an artist many so-called purists still refuse to adopt, yet his influence is clear on Cooks, with him even throwing a nod to the Canadian on the album’s first track “Rolls Royce Break Lights” (which also has that classic RZA feel).

Obviously, if you’re fed up of hearing the familiar theme of drug kingpin-turned-rapper boasting, “Reasonable Drought” isn’t likely to convince you Cooks is a big deal, but when you compare this to Westside Gunn’s first record, and look at where Gunn is now, it does make you wonder how far Cooks can go.

“Zippin’ and zaggin’, I’m whippin’ it back
I wrestle with the package like Cactus Jack, that’s a fact
Stove legend, bitch I’m a hold seven
Double-O Goldeneye through the scope weapon
My soul destined, Big homie told me loyalty’s a blessing
Hieroglyphic shit, my name was etched in it
I landed when the aliens came
I fell back with the lean, her bag is Celine
You don’t want to make the front of this magazine please!
Say my name to get the buckin’ off
The shit backfire like Uncle Buck exhaust”

It’s not a perfect debut by any means. “Bread of Life” is ironically lifeless – the beat is my least favourite brand of Roc Marciano where the vocals are so much louder than the instrumental that the backdrop fails to leave its mark. “Gloria Blemente” feels like an overlong interlude rather than a full song, and “Money Puddles” suffers from a loop that’s too repetitive for its own good.

The content of Cooks’ lyrics isn’t what makes him remarkable – it’s largely based around selling crack cocaine and the danger that profession entails. It’s the fact he’s effectively on the same level as your Benny the Butchers and 38 Speshs, with his first attempt. There are no features. He’s singing his own hooks. Minus the ones I wasn’t so keen on, Roc Marciano’s production is often better than he’s had on his own joints. It sounds like a crafted, major-label album in a world of EPs. If there’s any emcee he reminds me of, it’s 50 Cent. Someone who can apply their hand to different songs yet maintains a natural menacing presence and a brashness I’ve not heard in a long time. A lot of rappers are sharing their tales of selling drugs, but how many are sharing confidential information like security codes and where money is buried? That’s bold. Naming your debut album “Reasonable Drought” is bold. And with boldness, opportunity knocks and it will be exciting to see where Stove God Cooks goes next, and how Roc Marciano manages his talent.