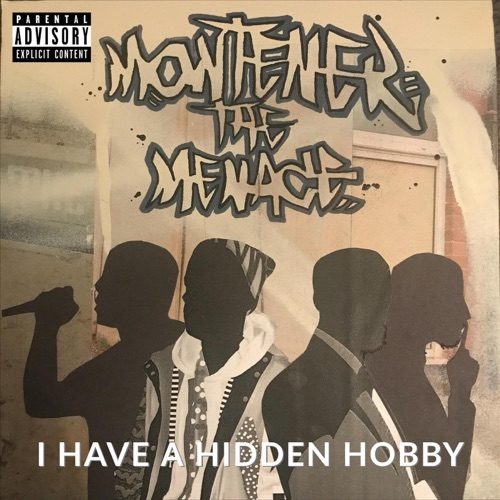 I Have a Hidden Hobby

Montener the Menace :: I Have a Hidden Hobby

In elementary school, they often had talent show events in which participants engage in performing special skills which they have developed. Sometimes, there was that one kid who everyone knew was seriously talented, but refused to put himself on display. Either they think their skill is useless or they’re embarrassed by it, but in either case, it stays locked away. South London emcee Montener the Menace has a similar predicament, but his has a modicum of humor to it: His aptly-titled debut album, “I Have a Hidden Hobby“, was released now in 2020, but was completed in 2008. There are several dated references throughout (Who uses BlackBerries anymore?) and though sometimes Montener’s flow is off-beat (like on “Step”), he makes up for it with clever lines and a penchant for polysyllabic rhymes.

To start, “It’s Over Now” is produced by Iron Fist Productions utilizing both a piano and flute sample. It features Blaq Poet, Punchline, & DJ Ike doing the cuts. The album’s title track comes immediately after. Produced by Explosive Beats, it’s got some spooky piano keys to it like a horror flick. UK rapper Baron Samedi raps on the second verse. Additionally, a remix is included later in the album. It has the same beat, but underground veteran emcee Copywrite is the only feature. The aforementioned “Step” is a large posse cut featuring Boodah, Klashnekoff, Cappo, Ramson Badbonez, & JabbaThaKut. The beat, courtesy of NYC legend Domingo, reminds me of a Snowgoons production with the epic crescendo of the sample. It also incorporates many lyrics utilizing the word “step”. Iron Fist Productions returns for the vintage urban crime theme-sounding “King of My City”. It has a traditional hip-hop sound to it and features Maylay Sparks, 12 Finger Dan, and Big Twins who starts the raps off with his gravely flow.

Montener has a knack for shit-talking rhymes, and it’s evident on the bouncy boom-bap of “Seek & Dismantle” as well as the hi-hat blaring of “The Better You Are”, in which his vocals sound slightly distorted, but not enough to keep lines like “I excel and am literally out of this world” from getting through. The album isn’t all battle rhymes, as Montener includes concepts. The Domingo-produced “Agents of Rap” has him, Wordsworth, Unlearn the World, & Inja waxing conspiracy theories about the correlation between the federal government and rap. “Facebook Friends” features Copywrite for some tongue-in-cheek commentary on rappers seeking collaborations while doing so with a massive sense of entitlement. But then we’re back to the regularly-scheduled program once “Straight Hazardous” starts with its rapid DJ cuts.

As for the remainder of “I Have a Hidden Hobby“, the beat for “War” has a good sample, but the kicks and snares sound too weak for the beat to really jump in a listener’s ears. Even so, Montener attacks his unseen opponents lyrically with lines like “I’ll make you see the light with Stevie Wonders eyes.” For “Big Daddies”, the beat picks up with some string synth-bass and contains a movie dialogue sample throughout. On “Draw First Blood”, Domingo starts with a simple drum and bass, but the other musical layers become apparent eventually, like it was sampled from a funk-jam session. The semi-misleading “My Sort of Happy Song” starts upbeat with a lush beat, but soon switches back to Montener’s aggressive style over an even more aggressive beat.

A debut album should showcase the artist in full and allow said artist to carry the album’s weight. Aside from anachronisms due to a 12-year gap, the only other problem on “I Have a Hidden Hobby” is its over reliance on guest appearances. 13 out of 16 of the tracks are either a feature or a posse cut. But nonetheless, Montener has chops on the mic. And if this is the Montener of old, I’d like to see how age has dulled or enhanced the Montener of New.

Montener the Menace :: I Have a Hidden Hobby
7Overall Score
Music7
Lyrics7