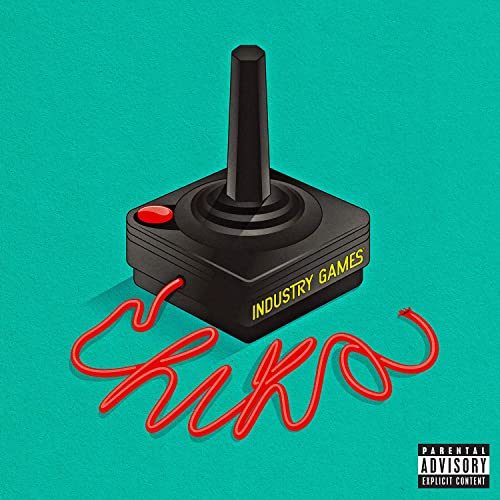 “I’m 22 making money, I feel too blessed to complain”

RapReviews has had many a UK Month in the past but never a Pride Month. We’re already halfway through June and starting now is hardly sufficient, but at this point I think inaction would be even worse. Black Lives Matter, and that statement contains multitudes of all sexual preferences and gender identities that also matter. I wouldn’t have it any other way right now than striving to be more inclusive and represent an ever increasing diversity of hip-hop artists and creators.

CHIKA would have caught my attention anyway just by putting an Atari joystick on the cover of “Industry Games“, which in itself impressed me given she raps about being 22 (though she turned 23 on March 9th). The VCS a/k/a Atari 2600 is twice as old as her, and I don’t know if she’s a retro gamer or if it was a cool image for her metaphor, but there are definitely a lot of games you have to play to succeed as a rapper. You need to be from the right city, know the right people, have the right producers, do the right guest appearances, et cetera and so on. CHIKA found her own lane in the game though. She put on her “Balencies (in the Bathroom)” and stepped into hip-hop right out of Montgomery, Alabama to spark a conversation.

“The whole world is conversating ’bout your waist line
And mental health days make you guilty, cause you waste time
I’m fighting everybody demons, but can’t face mine
Baseline, use all that pain and anger and just make rhymes
How I’m uplifting your whole life but still I hate mine?
How I get rich but still get pissed about the money?
Now everybody wanting me to wear a fake smile
How I’m supposed to fake a laugh when ain’t shit funny?”

CHIKA plays the most dangerous game a rapper can play here — emotional vulnerability. F(st)ans often reward the artist who offers them the most aspirational imagery. They want to see success and live vicariously through it, but CHIKA warns you that this game isn’t one you can’t win. Money can’t make you happy, fame puts you under a microscope, and the only way to punch back and win even small victories is to channel your frustrations into your art. It’s not all bad for CHIKA though. She raps that “went to Europe/met a fan who lived in Paris” and “started walking different” knowing she reached people that far away. She also raps wistfully about her girlfriend in Miami and her plans for a family together, noting that she smiles every time she thinks about her. Whether she knows it or not someone needed to hear that and had their life changed by it.

Representation matters, and as a proudly bisexual woman, CHIKA just made it easier for someone who identifies as bi to be who they are. “Crown” does even more by showing just how broad her intended audience is. “This is for the kids with depression/The one’s whose parental expectations got them stressing/The one’s who would rather persevere, bust they ass, trying to make it cause/they ain’t really living in the present/They out here grinding, seeking perfect timing/Tuning out the useless voices that discourage rhyming.” WORD. CHIKA wants to represent everyone who’s voices are not being heard. Gay, straight, bisexual, nonbinary, trans, asexual, pansexual, whatever. If you think the world is against you, nobody listens to you, and life is a raw deal all around, CHIKA wants you to put on the “Crown” too.

“Think it’s a game? They don’t control where I land” quips CHIKA on the title track of “Industry Games“, setting the tone for herself, her album and in fact her entire career. That self-confidence came with a few bumps and bruises along the way. It’s hard enough being black in America, let alone black in the South, let alone black and queer positive in a country that openly discriminates against both groups. CHIKA should never have had to prove herself to anyone, but damn it not only has she proven it, she’s walked through the flames and come out on fire. If there’s a reason to celebrate Pride Month in hip-hop let’s start with CHIKA, because she’s not only making music for the unheard who need their stories told, she’s making rap music to lift up anybody who feels down. You won’t walk away from “Industry Games” bitter that you aren’t as successful as her — you’ll walk away with a smile having heard what she has to say, knowing that she believes in you too, and maybe just maybe humanity can all rise together.