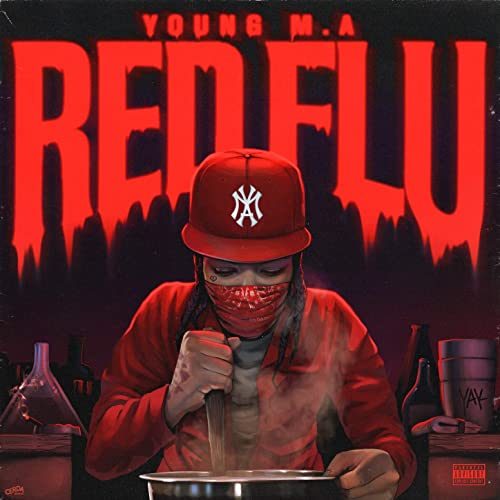 “I’m tired of hoes/How the hell you broke but wearing designer clothes?/You stupid hoe, I swear I’m through with those.”

I don’t believe Young M.A. released “Red Flu” on May 22nd just so it would be available in time for Pride Month, but the timing of the review merits the discussion whether or not it was her intention. In my formative years in the late 1980’s and early 90’s, there was a rumor that continually circulated that some well known, famous hip-hop artist was secretly gay. This was wrongly held up to be some sort of scandalous fact, and even in a pre-social media era, you could find posts everywhere online speculating as to who the “Gay Rapper” was. I find the whole thing embarrassing looking back. What does it matter what any rapper’s sexual preference or orientation is? The whole point of being an emcee should be about skills — the rhymes you write, your delivery of them, your vocal tone and breath control, how you lean into the instrumental or adapt your topic to the mood of the track. All of that and more is what really matters.

“Double cup I’m sippin up/Middle finger up, cause I don’t give a fuck/I don’t trust these niggaz, keep a glizzy tucked/C cup on my bitch, she like her titties sucked.” Katorah Marrero a/k/a Young M.A raps about the same things that a lot of dudes do — drinking Henny, fucking bitches, flossing money, rolling hard in the streets. Should it matter that she’s gay? No. Has that garnered her some extra attention because some people are fascinated by it? That’s likely. For her it’s a distraction. By her own admission M.A. liked girls more since the first grade, so she’s not even thinking about it nor being an icon for any community. In fact judging by her interviews she doesn’t even like the word lesbian, preferring to say “I don’t do labels. I just don’t date guys.”

Frankly if you didn’t know Young M.A’s story listening to “Red Flu” it wouldn’t even be evident there was anything to discuss. Not only does she rap like her male peers, she sounds like them, to the point you might have thought she was he — perhaps a very young male rapper just getting his first national shine on the cusp of manhood. Forget that though. That’s making her gender or orientation more important than it needs to be. Young M.A can use whatever pronouns they wants, fuck whoever they want, and sound as gender ambiguous as they want. Let’s just take M.A as is, and on songs like “Quarantine Party” it’s not ambiguous at all.

“She throwin that ass/I’m throwin this cash/She pick up the money/she throw in her bag/I’m tippin her money, I’m throwin a bag/Still got a quarter mill more in the stash.” The coronavirus pandemic isn’t slowing Young M.A. down. “My bed is big enough for six of them.” That’s definitely not social distancing right? Ironically M.A. has “Cabinets full of that Lysol, gotta spray my money.” Ahh. Launder that money. Keep it clean, figuratively and literally. We’re not worrying about catching a virus from our partners, just about catching a bad one from money either due to the feds listening or it being a “commonly touched surface.” M.A is definitely touching a lot of money if you judge by the bars. It’s mentioned multiple times every song. In “2020 Vision” it’s flashed prominently and frequently.

I’m happy to say the days where people speculated on who “the gay rapper” is are long gone. There are now many prominent artists who openly say they are gay, lesbian, bisexual, et cetera. It wouldn’t be right to say things are all good, because that would be like saying “racism doesn’t exist” when if you can see with “2020 Vision” it’s clear that racism isn’t going away. For hip-hop music and culture to reach a plateau of tolerance to stand on, we’d need to see openly trans, asexual, gender-fluid and non-binary rappers be welcomed the same way Young M.A or Lil Nas X is. That also means judging said rappers on their skills and not on who they fuck (or don’t fuck).

For that reason I have to say Young M.A is just “okay.” I appreciate the lack of AutoTune, I find the swagger to be par for the course, and the subject matter to be slightly banal. What’s the story on “Red Flu” then? Well it’s that Young M.A is a dude like any other dude who raps about money, hoes and liquor. That’s progress? In a sense, yes. That’s not to be confused with “progressive” though. Nothing M.A says pushes for equality, tolerance or justice at a time when we need those things more than ever. It’s asking too much to expect that of one particular artist though. M.A makes music for people who want to party even in the midst of a pandemic, and if that’s all you care about while listening, “Red Flu” delivers. This album is only accidentally about more than its topics. Young M.A isn’t out to change the world — she’s just out to fuck as many bitches in it as she can.