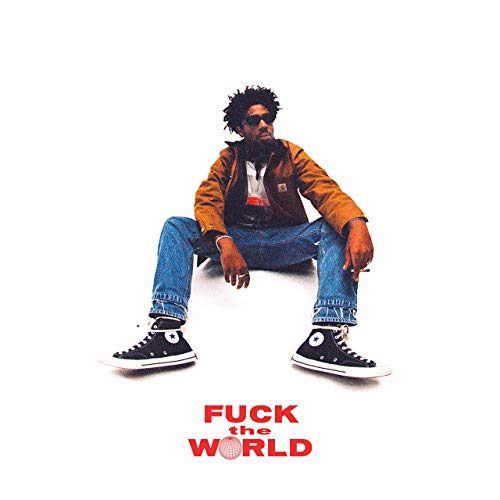 One of my favorite rap duets of all time features a hook that starts off “Fuck the world, don’t ask me for shit/Everything you get you gotta work hard for it”. That’s honestly the sole reason I checked out Brent Faiyaz “Fuck the World“. Seeing the name of the album evoked pleasantly nostalgic memories of hearing Christopher Wallace and Clifford Smith rapping together. There’s no better place to start then than with the song that shares the album’s name.

“Fuck the world, I’m a walking erection” offers Brent seconds into the title track. He certainly lived up to my expectations of being unapologetically coarse, and he’s a fine braggart as well with lines like “Took a trip to London just to hear how they talk”. It doesn’t take long before you notice that Faiyaz is more of a Frank Ocean type than a Biggie Smalls one. He keeps the language rawer than sashimi but he seldom raps and prefers to sing his way through tracks. He doesn’t have the deep voice of Nate Dogg but “Clouded” shows he’d smoke weed every day given the chance, noting “I’m still on the Eastside smoking with my OGs” and “I was fucking superstars when I was 19”. This definitely ain’t R&B for the radio.

Over the course of the last half decade, Brent Faiyaz pursued his music dreams from his hometown of Columbia from one city to the next, ultimately moving all the way across the country to Los Angeles. He linked up with all the right people and ultimately wound up with a cameo on the late Juice WRLD’s “Death Race for Love” in 2019. That ability to parlay and network is also why he’s owner/partner in his own imprint Lost Kids, who he pays tribute to on the track “Lost Kids Get the Money”.

In hindsight Brent Faiyaz turned out to be a far more fascinating dude on “Fuck the World” than I expected going in. I thought I’d get East coast hip-hop and got West coast DIY R&B with a ruggedly hardcore edge. When Faiyaz says FTW he means it. This is an artist who got major label offers from people like L.A. Reid and said (along with his manager) “Nah fam I’m good” and decided to strike out on his own. Some people might have assumed he was “Bluffin” trying to get a better offer from a major but he wasn’t. He has a vision for the music he wants to do that simply doesn’t fit into the already established formulas.

At only 26 minutes “Fuck the World” is (more than) a little on the short side, but it’s still long enough to make a powerful impact with a croon as opposed to a boom from the cannon. The only other complaint I could issue is that at times Brent Faiyaz is self-indulgent to the point of straight up misogynistic attitude lyrically. He’s so desirable every woman wants him, and because everyone wants him he can have casual sex and immediately disregard them and move on to the next sexual conquest. It’s the R&B version of Too $hort minus repeatedly calling women “bitches” and “hoes”, but he definitely devalues them in his presentation. Whether this is just a character he wants to project to increase his popularity or how he acts in real life isn’t for me to say, but it definitely falls into the category of not making your favorite artists your role models. Brent Faiyaz could become a favorite though — he’s got a sound and attitude that stands out in a crowd.