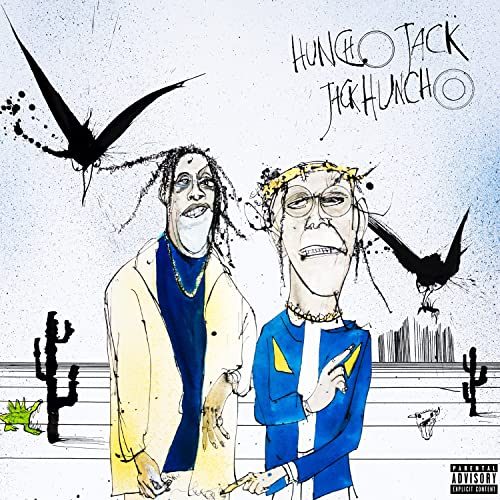 It makes sense on paper for Travis Scott and Quavo to create a rap supergroup. If two people are successful individually, you’d only expect them to be more successful by joining together. My childhood prepared me for different expectations though. No matter how good Jim Kelly and Andre Reed were as quarterback and receiver individually, they didn’t win a single Super Bowl together despite multiple attempts. You don’t always get wins by combining forces. Sometimes you take losses.

Now to be charitable you can argue the Buffalo Bills were a success because they got to four Super Bowls, even if they didn’t win a single one of them. Some teams never get there at all. Success is in the eye of the beholder, and one can argue that Huncho Jack was a success when looked at the right way. Their late 2017 release “Huncho Jack, Jack Huncho” certainly made a splash when it came out, hitting No. 3 on the Billboard Top 200 with 90,000 of what is now measured as “album equivalent units” in the digital streaming era. That’s not failure. Conversely moving units doesn’t mean you’re a success. If it did Robert Van Winkle would be regarded as one of the greatest rappers of all time. Let’s look at “Saint Laurent Mask” for example, which by today’s standards sounds like the title of a coronavirus fashionable accessory.

Quavo’s raps are tiresome at best, repetitive and nonsensical at worst. “Huncho Jack, we the robbers/Huncho Jack, got a chopper/You might want to keep this film rolling/Huncho Jack, won an Oscar.” No. Just NO. Travis Scott doesn’t add much, but what he adds is no good. “Live fast, live life easy/Put a drop in my sweet tea/X-rated, no PG/Your ex-nigga on creepy.” The rhymes are like bread dough that wasn’t kneaded long enough, left to rise long enough, nor baked in the oven long enough. It’s hard, stale, and the flavor is bad. It barely qualifies as singing or rapping. The music doesn’t help. The guitar that opens “Where U From” sounds like it’s out of tune, which makes the duo being AutoTuned even more ironic.

“Freaks, got me geeked/Energy, suck it out of me.” Congratulations Travis. You sucked it all out of me. “In love with ice and chains/I’m way too flashy.” And your point is? Quavo at least sounds like he wants to make a story out of his brag rap, although he makes it silly with bars like “stack it up like Pringles.” He’s trying though. Travis Scott puts less than no effort into what he’s spitting on the track. It’s as if Bill Gates was walking around his mansion, pointing at things he owns, and reciting them. “I have the Magna Carta. I have the original print of The Godfather. I have billions of dollars.” At least two of those three things may be facts but is that interesting to listen to? Come on. You know the answer to that.

Songs like “Motorcycle Patches” are pointless. 11 seconds into the track Scott has already explained the title, which leaves nothing interesting for either artist to say for the next three minutes, not that they’re even trying to do so. One of the oldest cliches of rap is to call someone a “hater” if they don’t like your music. It deflects valid criticism by making the focus about allegedly hating all of the success they’ve had in life. I don’t hate Travis Scott or Quavo for their success though. I hate “Huncho Jack, Jack Huncho” because two successful rappers with all the time and money to do something big didn’t achieve it. If you read a book and the protagonist won on the first page, why would you keep reading? These rappers are so busy bragging about their wins that they’re boring. You’ve got stacks, whips, ice, and chips but who cares? Their fans do I suppose. Not me. Not as a duo at least.

Individually they’re just fine (the latter more so than the former) and have proven track records of doing big things. Somehow though the grander the vision of the project they conceive, the higher the chances are of missing the mark. There’s nothing wrong with bragging about your success as a rapper, but when your success as a rapper is you bragging about your success, the whole thing becomes a rap ouroboros. I’m over here watching two successful rappers conspicuously consume their way through an album until in the end they’ve consumed any interest an observant listener could have. The only way to enjoy this album is to turn your brain off and listen to the production, because the raps only detract from the beats.