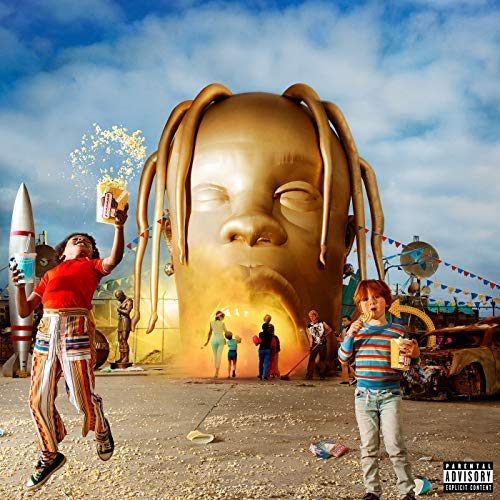 I have mixed feelings about Travis Scott, or to put it another way, I feel largely ambivalent about his career to date. I find myself neither hating him nor feeling much affection for his music one way or the other. He drops catchy singles, he makes cameos for all the right people, and I don’t mind hearing his music. I’ve also found him to be a cookie cutter amalgamation of all the current pop slash trap slash wave slash drill slash AutoTune slash R&B rappers of this generation. I’m not even sure “rapper” is the right word for a lot of them. I feel like an old head who sits in Pop’s barbershop and whiles the time away saying “In my day rappers were RAPPING” while the other grayhairs nod along and go “mmhmm” and “that’s right.” I try to avoid becoming that cliche, so I keep on listening to Travis Scott, but he never quite grabs me.

If I had to boil it down to one thing it would come down to the fact that I’m not sure Travis Scott has any message to impart through his music. Even if the only thing you learned from a rapper was the city they were from and what life was like there, you still wound up knowing Too $hort was from Oakland, Sir Mix-A-Lot was from Seattle, E-40 was from Vallejo and Scarface was from Houston. You felt like you got to know about the person you were listening to and what mattered to them. Now not-so-coincidentally I put Mr. Mr. Brad last on that list because Travis Scott hails from H-Town too, but there’s not one point listening to “Astroworld” where anything that feels like his Houston roots shines through to me. It occurred to me that if I couldn’t hear it, maybe I could see it, so I pulled up the video for his lead single “Butterfly Effect” to take a look.

I can’t pick out anything specifically Houstonian about the clip either, and once again that’s neither a great gain or a great loss. The video is much like the song is much like the rapper himself – young and flashy. We see him riding around in an expensive car which has been given some music video budget nitro jets, we see a lot of attractive females dancing seductively to his hypnotic musical flow, and we see Scott himself in various states of dress and undress. When fully clothed his collection of gold jewelry sways to the beat, and when he’s unclothed he has a lean physique complete with the abs to show he works out. He’s not swoll, he’s just “in shape.” More power to him if can make all the money he’s making and still eat well and exercise – the temptation to “get large” is hard to resist.

Talking about his physique seems a little bit shallow for a review, but then again the topic matter that Scott raps about doesn’t lend itself to much depth or significance. I thought I’d finally hit the jackpot when I came to a song called “Houstonfornication” – an obvious play on the RHCP song “Californication” but more importantly a chance for Travis Scott to finally impart a sense of identity about who he is and where he’s from. As you’ll see from the lyrics though that shining moment never materialized.

“Wedding bands on my fist, it is freezing
Throw the bands get a kiss then she leave me
I just want the peace, it’s still Lambo’ over Mercedes
Just built the Astroworld playground to play with my baby, yuh
Had a few pop singers, anyone could be yo’ mama
Had some real conversations with my nigga Bill about congress yeah
We at the fest come and link, per request
Send the pin drop it in GPS (yeah yeah)
Seein flashes oh no no that’s my neck (yeah, it’s lit)
I’ve been livin paranoid watch yo’ step (yeah yeah)”

It’s just like any other song on “Astroworld,” f’real. What we learn about Travis Scott on mixtape after mixtape and album after album is that he’s more a lifestyle than a person. In fact he’s an aspirational lifestyle, a straight up “started from the bottom now we here” lifestyle, and he’s got all the finest things. He’s got money to blow on jewelry, women, cars and cribs and seems to never think about balancing a spreadsheet. That’s some lottery winner s–t right there. Even when he experiments with different sounds (damn near different genres) on tracks like “Yosemite” the topic matter stays exactly the same right down to the “ice on my neck.”

Once again I’m left with the question “What exactly is the point of Travis Scott?” Even if he was offensively bad it would at least spark a feeling of disgust, and if he was extremely racist or misogynistic it would generate outrage, but he’s neither that disgusting nor that outrageous. There’s nothing to really get mad at, but there’s not much to get excited about either. Scott is just “aight.” I ain’t mad at “Astroworld” but I’m not doing backflips over it. It’s good background music and that’s about it.