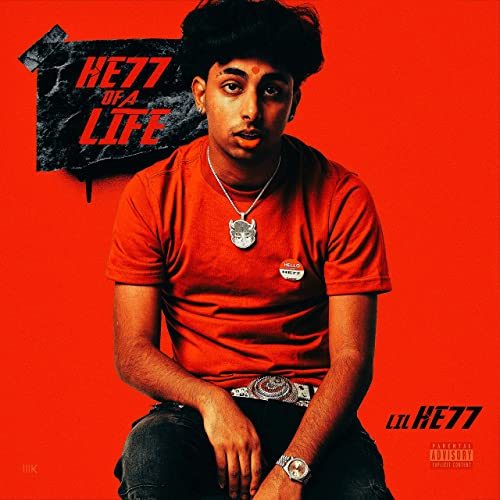 Rishi Anand Acharya a/k/a Lil HE77 instantly proves the ubiquitous nature of today’s rap sound on his debut album “He77 of a Life.” The Atlanta emcee comes from an Indian family but sounds interchangeably like Lil Yachty, Lil Wop or any other “Lil” rapper who lives there. It may or may not have you in your feelings that he also throws around the “N” word freely on songs like “Chain Swang.” The fact he does tells you that regardless of his ethnic heritage he identified primarily with a different peer group than his parents would have, and clearly it isn’t an issue for him or any of them.

To be blunt if I hadn’t taken a minute to find out who Lil He77 was (which saw me typing “Lil H377” about a dozen times by mistake) I would not have known his background nor given it a second thought. A recent staff discussion pointed out to me how music like Lil Uzi Vert’s “speaks” to the youth in the same way Public Enemy and N.W.A “spoke” to me at the same age. There’s an ineffable quality for young people making music for equally young people that comes from them speaking the same language culturally. While people my age often deride singing rappers (a trap I’ve fallen into myself) it’s what the listeners expect from their favorite artists and vice versa. They understand each other on the same level.

According to his Spotify bio “his main goal is to inspire other Indian kids to not fall into the stereotypical norms of being a doctor, engineer, or businessman.” That’s a noble sentiment and good PR for Lil He77 if people like me are researching him. “In Advance” with VL Deck is not full of noble sentiments. Both rappers are bragging about how much they floss, how many women they sleep with and how fearless they are. “Yeah that drop top Porsche with the all black guts/All that whining, all that crying, nigga you getting cut/Yeah, see me out in public hope that you don’t get bucked/We got problems and I can’t solve ’em, nigga I don’t give a fuck.” If you didn’t know why he calls himself “Hell” as a rap artist, now you know. He’s not Heaven.

After a half hour of “He77 of a Life” my conclusion is that the young (18) rapper encapsulates my statement about the generational drift of hip-hop. Coming of age in an era of artists like Run-D.M.C., Ice Cube, De La Soul, Nas and Geto Boys gave me a certain expectation of what rap music was and should be. They had different accents, different topics and different vocal tones but still had a background in common as rappers who came of age after Sugarhill Gang, Kurtis Blow and Whodini. They were shaped by their peers, I was shaped by them, and today’s artists are shaped by the success of priors like Lil Wayne and Migos. That’s alright by me. It’s not always going to be my preference in rap, but Lil He77 makes music for his generation.