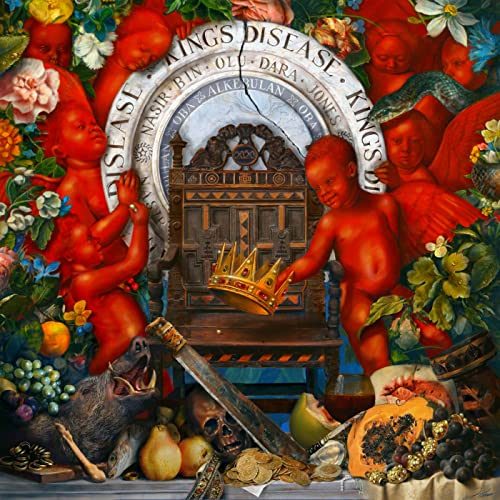 Nas is a meticulous writer because he sees and hears everything that crosses his path. It’s why “Illmatic” was such a milestone in the first place. He’s aware of prior criticisms about poor beat selection and historical inaccuracies, so he’s done everything in his power to sound more politically correct and “modern.” For “King’s Disease”, Nas hooks up with Hit-Boy (who’s lived up to his weighty name in every aspect) for a refreshingly tight listen that somehow feels less heavy-handed than the shorter Kanye assisted “NASIR.”

Much of the enjoyability comes courtesy of Hit-Boy’s pictorial orchestrations that strike a balance between grandiosity and intimacy. “Blue Benz” for example thrives off of scintillating piano keys and splintered vocal chops. The landscape is oxymoronic in nature, representing that dual mentality exuded through the title and biblical cover art. “27 Summers” meanwhile becomes inherently more cinematic as percussion builds on top of one another like a 7-layered nacho dip. “Replace Me” is equal parts mysterious and celestial. Hit-Boy’s great at curating the unpredictable (most notably on “Sicko Mode“), so his stout contributions should come as no surprise.

To juxtapose the conniving production, Nas pens lyrics that feel more stationary and brazenly predictable. He never writes anything overtly foolish, but there are moments of conceptual shortsightedness and negligible medievalism. “Ultra-Black’s” discernible lane never reaches intriguing heights due to stiff metaphors and a limited prose.

“To Africa, you say, ‘Go Back’
I stay pro-Black, my Amex black
Black like cornrows, afros
Black like Kaep’ blackballed from the Super Bowl”

The rapper’s chivalric storytelling has always felt a tad antiquated for my liking, especially when considering his troubling past with ex-girlfriend Kelis. “King’s Disease” continues lavish world-building without fully dipping into that aforementioned duality. “All Bad” attempts to paint Nas as this wounded lost lover, but much of what he says (particularly in the third verse) sounds like it was ghostwritten by Drake (“Texting me that they hate my one-word answers/Here’s two, call me, this is you stalling/Guess we through, you ignore me, days go by”). His sentiment seems genuine, but no self-proclaimed “king” should be worrying about an unanswered text. No listener should care either, especially in this context.

The Lil Durk-assisted “Till the War is Won” is a more worthwhile venture into the faux structure of an American household (even if it’s a tad basic in tone), especially when backed by a gorgeous sample from Nicholas Britell’s “If Beale Street Could Talk” score. Without that backbone, I don’t know if I would’ve enjoyed Nas and Durk’s basic female empowerment material.

Despite my mixed feelings about the content matter, Nas does show signs of past greatness. “Car ’85” fits snugly inside of Illmatic’s vivid intelligence, while “10 Points” highlights an important distinction between monetary wealth and mental liberation. “Spicy’s” luxurious-driven ethos luminates in the same territory as “Life Is Good’s” savoir-faire. Nas is at his best when he’s not trying to come off as “deep” or revelatory.

Without Kanye’s restrictive hand in the process, Nas is able to at least curate a world only he is comfortable in, even if there are some problems with it. From the get-go, it’s clear that he has more chemistry with Hit-Boy than he’s had with any producer since the 90’s.

I admire his insistence on allowing others to claim the spotlight, like Don Tolliver on “Replace Me,” or Fivio and A$AP Ferg on “The Cure.” Even the reunion with The Firm doesn’t seem as empty or outdated as initially expected. The biggest missed opportunity lies in Nas’ inability to reach beyond the ambitious presentation found in everything surrounding the lyrics. He’s entertaining in spurts, but much like his “godly” contemporary Jay-Z, one has to wonder if what he says ever really matters on “King’s Disease” any more.