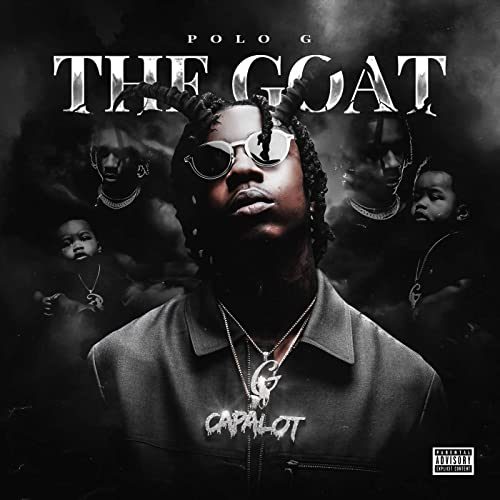 Polo G just turned 21 on January 6th. Congratulations dude. 2020 is not a year anybody wanted to reach that milestone in, but #BlackLivesMatter and we should celebrate any young black man, woman or person in this country who overcomes the obstacles to adulthood. Unfortunately being a successful rapper only increases the number of road blocks in your way, which means an ever-increasing number of rappers never reach the goal. There are no easy solutions to the pressure cooker environment that makes shit pop off in a heartbeat, nor the nihilism felt by those who grew up destitute and feel they (literally) have nothing to lose, nor the covert AND overt systematic racism of the United States. Right now all I can do is offer Taurus Tremani Bartlett my respect for surviving the mean streets of the Chi and also releasing his second album “The Goat” during the pandemic.

When you’ve got “Mustard on the beat” you’re more likely than not to drop a hot single, and “Heartless” certainly fits the bill. The song’s title might suggest G is balling with no remorse, but I find gems that suggest Polo isn’t going full YOLO with it: “Way more to life than just the hood, I’m trying to reach goals.” Inspirational raps with AutoTuning? We need more of that. That’s not to say Polo isn’t still flossing his whips and chips on the track, but if he has the foresight to say there’s more to life for him than that, I can picture him building a business out of his rap fortune instead of spending it faster than he can make it. If you’re looking for something a little more reckless though may I suggest “Go Stupid” to you?

Co-produced by Tay Keith and Mike Will Made It, the song is loaded with both conspicuous consumption and guest stars, as Stunna 4 Vegas and NLE Choppa add their own rowdy verses to the track. Choppa in particular lives up to his name with an absolutely savage track, providing the template for a Tony Montana anti-hero who lives by his own code and enforces it with callous disregard for anyone in his way.

“I ain’t gon’ cap, I don’t even like rappin
But I love wrappin them bodies and shit
Fuck the bitch, and when I get done
I’ma up my Glock and then rob the bitch
Catch a nigga when he clock out
I’ma get him whacked at his job and shit
And I don’t know why the police keep fuckin with me
Cause they ain’t stoppin shit, yeah”

If you make the mistake of assuming he or Polo G are role models then songs like “21” would dissuade you quick. “Bunch of hollows spittin out the Glock/I’ve been servin fiends all day/out there posted with the gang/Nigga we was taught to get it off the block.” The question you have to ask yourself is “Were they supposed to be one?” Some rappers are (Common, J-Live, etc.) but many are just trying to entertain the listeners with a legal hustle. “Nigga where I’m from, they turn death into a contest” quips Polo, giving you all the justification he needs to be rapping about slangin’ ‘caine and popping shots on the Northside. You’ll live longer rapping about it than trapping about it in this world, so by all means G tell us your stories.

Even amongst the darkness Polo G continues to shine light with songs like “Be Something” featuring Lil Baby. Over the bass thumps and quiet piano licks from Resource, G reminds us again that attributes of his real world grind bleed over into his rap persona: “If my brother need it, then I got him, man, the whole gang know how I’m bleedin/Tryin to wake up from them nightmares, devil in my ear while I’m dreamin/In my past life, did some bad things, I know karma tryna get even/Tryin to get away from all the drama, hopped in the Benz, now I’m speedin.” Pump the gas young G, stomp on that accelerator. I hope the demons don’t catch you.

Chicago drill rappers get unfairly labeled as battle scarred warriors who have no hope for the future that live for today because they can’t see tomorrow. “The Goat” suggests Polo G can’t be pigeonholed by those narrow definitions. The album is well balanced between struggle raps, flossing brags and more thoughtful tracks. From the hood narrative “Trials & Tribulations” to the heartfelt Nick Mura produced “No Matter What” (“my homies died young, that wasn’t part of the plan”) to the dramatic finale “Wishing For a Hero” featuring BJ The Chicago Kid, the album scores with surprisingly upbeat tracks again and again. The latter even takes the template of 2Pac’s “Changes” and updates it for the modern age complete with a Bruce Hornsby and the Range’s “The Way It Is” sample.

Polo is “trying to smile through all the pain and tears” and I think we all can listening to this album. Positives of “The Goat” — it’s 47 minutes long, it’s slickly produced, and even when Polo’s voice is Tuned up it’s not to cover up him being mumble mouthed or syrup addled. Negatives — well there aren’t too many. “Chinatown” doesn’t do anything for me, and it’s a little weird to hear the late Juice WRLD on “Flex”, but that’s about it. There are a couple of stretches on the album where Polo G’s sing-song delivery becomes a little too repetitive, but taken as a whole “The Goat” is able to even things out. Perhaps the only major issue one could take is that at 21 Polo is still far too young to be a G.O.A.T. but if he’s able to build on the early successes he’s had then he’s headed in the right direction to be in that conversation.