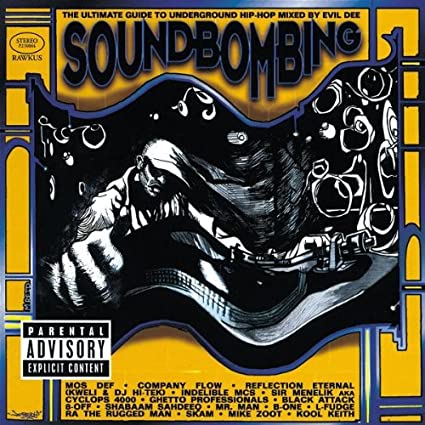 “If music doesn’t work/I got nuttin’ left to live for except dying in a po’house (bitch!)” – R.A. the Rugged Man, “Flipside”

Happily for Mr. Thorburn we know it all worked out, but back in 1997 that was far from assured. Urban legend holds that R.A. the Rugged Man was dropped by Jive Records in the 1990’s after verbally (perhaps physically) threatening people at the label for not putting his shit out. During that period an unreleased track featuring Notorious B.I.G. with the nasty title “Cunt Renaissance” made its way onto mixtapes, increasing his legend to the point it was no surprise he ultimately found his way to Rawkus Records. They were the biggest little label in the world at the time, “Independent as Fuck” and proud of it. Three months before “Soundbombing” dropped they were riding high off the success and critical acclaim garnered by Company Flow’s “Funcrusher Plus.” A compilation album was the next logical step.

“Soundbombing” carried the subtitle “The ultimate guide to underground hip-hop mixed by Evil Dee.” Those were lofty aspirations, but by starting out the compilation with songs by R.A. and the supergroup Indelible MC’s (a song also featured on CoFlow’s album) they were off to a good start. The presentation continues along at a solid pace through tracks like CoFlow’s “Lune TNS” and the Nick Wiz produced Shabaam Sahdeeq cut “Arabian Nights,” but it leaves you little prepared for the atomic bomb to follow.

“I’m sipping wishing well water, imported, from Pluto.” Those words from Mos Def were burned into my brain with laser etched precision. Hi-Tek’s bubbling piano, scratchy records, hard hitting drums and the triple threat of emcees was a revelation. Mr. Man declared himself “Lyrically a miracle, mentally I’m physical” while Talib Kweli dropped punchlines like “I’m always taking shots like a Japanese tourist, get the picture? Flyer than Keyser Soze and no exposure.” Any two of these three together over Hi-Tek’s beat would have been a massive success, but combined together this was an instant “must own” single for me. The B-side “2000 Seasons” was ALSO featured on “Soundbombing” and like its predecessor did not disappoint.

The outro of the song has Evil Dee saying “buy two copies of each […] support Rawkus Records” and I certainly must have bought the hype because I also bought the vinyl. If there’s a knock against the first “Soundbombing” it would be that if you were religiously buying their releases, you wound up with copies of every song on every volume from the first to the third. Let’s be real for a minute though — how many people other than an insane college kid with a credit card he wasn’t afraid to max out and a friendly website like Sandbox Automatic were doing that? For the sheer value of getting the best of Rawkus in 1997, you really couldn’t go wrong here. Take the self-produced “So Intelligent” by Sir Menelik for example.

As a die-hard Kool Keith fan I’d have bought anything he was featured on, but the revelation of this Rawkus song was that Menelik sounded like an evolved version of the man who put him on. “Observe my brain” quips Menelik, and that’s what you’re forced to do as he spits out a rapid fire stream of science fiction and fact, until both emcees sarcastically attack their competitors on the chorus with the words “You think you’re SMART.” The only way to outdo that is to feature somebody who IS that smart — the El-P produced Sir Menelik track “Nightwork” which he also guests on.

Every time you turn the page on this compilation it’s another revelation. From the massive DJ Spinna produced posse track “What If?” featuring L-Fudge, Mike Zoot, Shabaam Sahdeeq, Skam and Talib Kweli, to the Shawn J. Period laced “Universal Magnetic” from Mos Def, to the now largely forgotten B-1 on “Empire Staters” produced by Chuckie Madness, you really can’t go wrong at any point even if you hit random and press play.

The amazing thing is that as high as “Soundbombing” set the bar, “Soundbombing II” vaulted OVER it with room to spare. For better or worse though Rawkus had better distribution channels by then, so first print run copies of “Soundbombing” come at quite a premium these days. In fact the links throughout this review lead you to a reissue under a slightly different name, but the tracklist and music are so far as I can tell exactly the same, so do yourself a favor if you’re going to cop volume one and save a buck or two. Either way if you’ve got the itch for that underground hip-hop sound of the mid-to-late 1990’s, this album will scratch it for you with a vengeance.