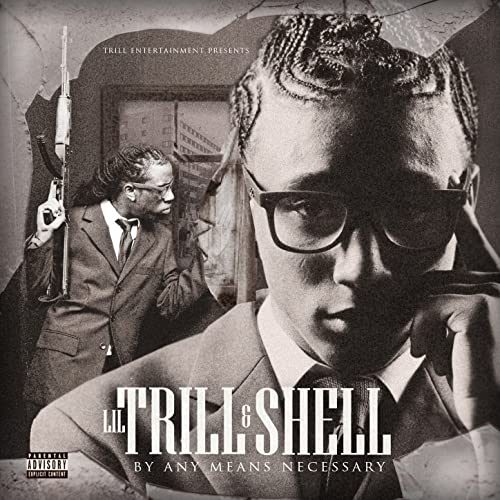 By Any Means Necessary

I hadn’t thought about Trill Entertainment in a hot minute. I was surprised to find their website still online and simultaneously NOT surprised to find a copyright date of 2010 and banner ads promoting Webbie’s “Savage Life 3” from 2011. The imprint was the brainchild of the late Chad Lamont Butler, better known as Pimp C from U.G.K. His untimely demise in 2007 may have spelled the end of a legendary rap group, but the label he left behind had enough artists signed and momentum behind it to keep moving forward without Mr. Butler’s foot on the gas. Eventually that momentum stopped. If you try to search for it on Wikipedia now the page simply redirects to Boosie Badazz, their best known and biggest artist. As recently as 2015 (shortly after his release from prison) his albums were still being credited to Trill, but now they read Badazz Music Syndicate, so I suspect (without concrete proof) his deal expired, the label died, or BOTH.

Stumbling across Lil Trill & Shell’s “By Any Means Necessary” takes me back to 2012, right as Boosie was in the middle of a maximum eight year jail bid. His incarceration probably ended any hope for the label, but they dutifully put out another album and even profiled Trill online ahead of its release. I would have said they profiled both but Shell’s page is just his discography. I’m concerned about posting links to a website that hasn’t been updated in a decade in a review, so just in case it suddenly vanishes in a puff of smoke, here’s an excerpt of Trill’s bio. “Lil Trill (nee) was born in Baton Rouge, Louisiana in 1994 and grew up in the Sherwood area. According to Lil Trill, he grew up living between his mom and his dad in a dichotomy that struck the balance between his well-to-do father and middle-class mother.”

It’s obvious from both the bio and the song “They Don’t Like Me” that everyone had high hopes for Lil Trill & Shell to succeed. Guest appearances from Boosie and Yo Gotti gave the group instant credibility, though if I was to pick a single to focus on it would be “Come Here” featuring Webbie instead. It’s got that prototypical Baton Rouge swagger that made so many Trill artists superstars along with a laid back melody that you could play anywhere from a topless convertible to a topless night club.

Unfortunately like Trill Entertainment itself, someone let their foot off the gas on “By Any Means Necessary.” I can find precisely one music video from this album and it was for neither of these tracks, both of which were ideal vehicles to introduce the young Trill (he wasn’t even 18 yet when profiled on the website) from this team to the larger world. Instead they filmed a clip with Gutta TV for “Real Talk” — a fine song to be sure but not one that was pushing Lil Trill & Shell into the mainstream. Eight years after its debut it only has 47,000 views.

On the real though that’s a decent number compared to the returns this duo got for their efforts just a few years later. Going back to “By Any Means Necessary” is like finding the exact moment that everything started to implode. Without their most charismatic rap star to record and tour because he was locked down, the label became directionless and lifeless. Many of the songs here reflect their malaise. “Top Notch” is about a quest to get a fly girl, but it ends up sounding like a parody of a Juvenile song that would be more interesting. The whistling of “Bob Barker” makes it sound like one of Ying Yang Twins. Production makes “Everythang” interesting, but the cliched posturing of the bars cancel it out. “The streets say they’ve been waiting for some ol’ shit they can vibe too/Roll your blunt and pour your cup cause this that shit you get high too.” Word?

The tired trope of “keeping it real” isn’t enough to justify the lyrics generally or the song specifically. It’s a damn shame knowing Lil Trill & Shell came out at precisely the WRONG time. They needed someone to push their music forward and motivate them. The album cover is entirely misleading. It mimics two famous photos of the late Malcolm X and the album’s title track (featuring Lil Phat) samples from him as well, which implies the artists had much higher aspirations than the lackluster product they put out to the public. It’s hard to say what could have righted the ship for them or the label though. The lifeboats were in the water and not everybody was going to survive. I can’t say Lil Trill & Shell perished in the icy depths because they kept recording after “By Any Means Necessary,” but it just never clicked for them and this album wouldn’t convince you it would. It’s average at best for their own label’s standard and not a must-listen.