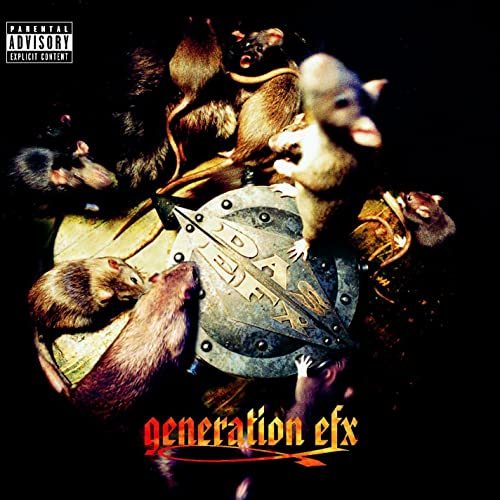 Here’s a quick recap of the first trilogy of Das EFX albums: “Dead Serious“, 9 out of 10. “Straight Up Sewaside“, 7.5 out of 10. “Hold It Down“, 7 out of 10. The “glass half full” perspective is that they had remarkable consistency in a very competitive 1990’s rap scene. The “half empty” one is that they released a hip-hop classic right out the gate and then started backsliding toward mediocrity. Krazy Drayz and Skoob took three years off to refill the glass before coming back in 1998 with “Generation EFX.”

Brick’s “Dazz” shapes the instrumental, co-produced by Rashad “Tumblin Dice” Smith and Armando Colon. It’s a solid choice, but even at the time it immediately made me think of Ice Cube’s “No Vaseline” and Dana Dane’s “Cinderfella Dana Dane,” and the track suffers by comparison to both thanks to more charismatic performances. “Big Mac not the Whopper, peace to Big Poppa.” Uh-huh. “Sewer rats get a lotta, cheese like ricotta/The two man team, the rap scholars.” HOLD UP, WAIT A MINUTE. That’s not the original line. For reasons I still don’t understand, former Hit Squad friend and compadre Redman was on the album, then highly conspicuous by his absence from the music video. Re-recording the line shines a light on Reggie Noble’s absence that’s brighter than the sun.

It’s even more irritating given that Funk Doc delivers the best performance of the entire song. “So hot, my chewing gum flavor’s enchiladas/You can tell, I don’t give a fuck.” While it might seem like lingering tensions between Erick Sermon and Parrish Smith could account for Hit Squad and Def Squad not working together on the video (Das EFX went with the former and Reggie Noble the latter) that’s not the case — EPMD had already reunited one year earlier for “Back In Business.” If this whole situation isn’t odd enough, Redman is on TWO versions of the song on the CD, the latter book-ending the album with an even more prominent use of the Dazz sample. He’s not the only guest star though. M.O.P. and their cohort Teflon appear on the Solid Scheme produced “No Doubt.”

“What Goes Around” featuring crooning from R&B artist and legendary radio show host Miss Jones. I’ve knocked Parrish Smith for his production at times, but on this song his selection of soulful samples and layering of instrumentals and vocals is perfectly balanced. Everything about this song feels like it was destined to be the album’s second single — only it wasn’t.

Now if I were to knock Smith for missing the mark, it would be for his lazy and uninspired jack of Survivor’s “Eye of the Tiger” for the EPMD family reunion song “Generation EFX.” It’s not just bad though — it’s bad directly compared to a song that came out THE SAME YEAR — M.O.P.’s “4 Alarm Blaze” produced by Laze E Laze. It makes PMD look like a complete hack especially given that M.O.P. are guest stars ON this album. Maybe that’s all just a million to one coincidence but if you listen to both songs back to back, Laze did it right and P did it wrong, and that’s all and that’s it.

Unfortunately “missing the mark” describes “Generation EFX” as a whole. For years the duo struggled with becoming both the most imitated and (through no fault of their own) most hated “iggidy iggidy” rap flow technique, to the point Oakland hard rock Casual quipped “Enough with these motherfuckers biting Das EFX” on his debut CD. Drayz and Skoob never seemed to get a handle on their response to the negativity. At times they’d drop the style to attempt to appease their peers, and then they’d see their sales and popularity slipping and go right back to being “Diggity Das” to woo back the fans they garnered on their debut. “Make Noize” vows they’re “biggity back with the formula” but ironically fails to make any.

The group should have made choices for their own artistic merit and not due to any outside pressure or criticism, but whatever their motives may have been “Generation EFX” ends up sounding dated as a result. Competition from the East, West, South and Midwest had rapidly reshaped the hip-hop landscape throughout the 90’s, and Das EFX wound up in the spot no artist ever wants to be as a result — a living fossil.

Having guest stars on the album was an attempt to invigorate their formula, but are PMD affiliates 8-Off Aguilar and Nocturnal enough to get the job done? “Somebody Told Me” is one of the album’s better tracks, but nobody was clamoring to hear them rap with Books and Drayz or vice versa. Boring songs like “Set It Off” and “Rite Now” couldn’t have been saved even if they had guests. The bottom line on “Generation EFX” is that it’s not a terrible album, but it’s not an important one either, and it continues a sad trend of Das EFX albums becoming less meaningful with each release.