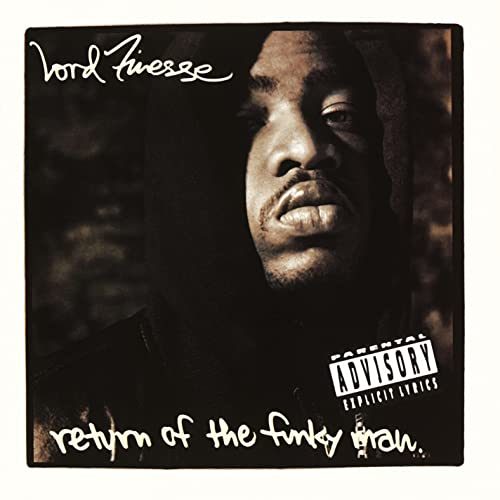 Return of the Funky Man

As funky as Brand Nubian’s “In God We Trust” and its lead single “Punks Jump Up to Get Beat Down” were, there was a huge coincidence that hardcore hip-hop heads in 1993 couldn’t possibly miss. Almost a full year earlier Lord Finesse released his second album “Return of the Funky Man” with a song entitled “Stop Sweating the Next Man.” Both tracks were built off a sample of Lou Donaldson’s “It’s Your Thing,” and although each one was chopped up differently and looped at a slightly different speed, you couldn’t hear one without recognizing its similarity to the other.

There’s no question that DJ Aladdin and SLEJ Da Ruff Edge did it first. Even if you go by the date “Punks Jump Up to Get Beat Down” dropped as a single that was August 1992, six months after “Return of the Funky Man” dropped. Coincidences DO happen no matter how improbable they might seem, and there’s no denying “It’s Your Thing” is an incredibly ripe track for sample picking. It’s worth nothing though that Diamond D’s production is on both the B.N. single and Lord Finesse’s album. It’s also worth nothing that Lord Finesse didn’t drop “Stop Sweating the Next Man” as a single, so one could argue that even if Finesse did it first, Brand Nubian did it BETTER. As far as singles go, Finesse introduced his new album with the title track off it — or perhaps the single’s success inspired him to give the album the same name.

“Can it, I’ll steal your show like a bandit
I get papes while you’re broke like mass transit
You’re not as smooth as this, so what can you do with this
Brothers need to stop and step with that foolishness”

The track showcases what fans and haters alike already knew about Robert Hall — the man is absolutely wicked on the mic. His confidence informs his dominance. Cocky lines like “If I ever got served it had to be by a waiter” make Lord Finesse a pugilistic emcee, daring foes to have a rap battle with him, knowing no one could beat him in a cipher. He flows the way Mike Tyson used to box. Finesse holds nothing back, attacking with knockout blows bar after bar. Even Showbiz singles like “Party Over Here” come off more like a brawl than a party. “Throw rhymes like some lucci/kicking like Bruce Lee/I make G’s off a pen and some loose leaf/I’m gone with the wind as soon as I begin/And if my girl act funny, I bag her friend.”

I’ve always like the album version more than the remix, but both tracks are mad fat. Speaking of weight, Finesse vowed “I get looser as a dope ass producer” on the song, and he proves that on the self-produced “Fat for the 90’s” duet with A.G. (Andre the Giant).

The album is a slice of delicious Diggin’ in the Crates cake from the 90’s both musically and lyrically. Diamond D sets Finesse up to brag “I’m the baddest motherfucker that’ll you’ll ever know … I kick more ass than a star of a karate flick” on “Praise the Lord,” but also turns in bangers throughout the album. The Baby Huey “Mighty Mighty” sample gives “Isn’t He Something” sweet 70’s soul. The multi-layered “Fuck ‘Em” was a B-side that was never going to get any radio play and that fact always cracked me up. My favorite D production here has always been “That’s How Smooth I Am.” It could be the ultimate height of arrogance to sample your own voice side by side with LL Cool J and Big Daddy Kane for the hook, but it WORKS.

The song is unapologetically sexual with lines like “I’m laying girls out like carpet” and yet it avoids the crass misogynistic overtones of similar sexual escapades from his contemporaries. He never utters the word “bitch” or “ho” even ONCE on the entire track. Getting back to D.I.T.C. though, we’ve already talked about Showbiz, but we haven’t talked about the posse track “Yes You May.” Hearing his tag team partner A.G. on the track is expected, but Percee P’s opening verse is a show stealing performance full of tightly interwoven rhymes and nimble tongue dexterity.

P also returns for the album’s closing track “Kicking Flavor With My Man” with Diamond D and Petawane providing the instrumental. It’s not as good as “Yes You May” but not many things are. It’s still nice to hear from Percee one last time before the presentation comes to a close even if the beat AND the rhymes on his other cameo are much hyper.

I could go on for days about how Percee P should have been a rap superstar in the 1990’s and everybody missed the boat, but that ship has done sailed dunn. Instead I’ll talk about another Petawane and Finesse produced track called “Funky on the Fast Tip,” where the Lord proves he’s in command no matter how many BPM the beat is. His braggadocious versatility knows no limits. “I eat em like sandwiches, send them home in bandages/Give me a mic, I show you what doing damage is/Nice swift and, deeper than quicksand/I’m taking out opponents like a hitman.”

“Even I must admit, shit, God damn I’m fly.” That’s what sets Lord Finesse apart from the pack — even when he’s bragging there’s a tongue-in-cheek playfulness to his boasting. Some rappers could become awfully tiresome talking about how great they are for 70 minutes, but “Return of the Funky Man” never wears out its welcome. There aren’t bad tracks, just a few that aren’t classics. “Save That Shit” is okay but drags on a little too long by going well over five minutes. “Show ‘Em How We Do Things” also suffers from its length at 5:37 in run time, but it’s the raps of Harry-O and Shelrumble that make for this album’s weakest cameos. While it’s not quite to the level of “Funky Technician” as a hip-hop classic, “Return of the Funky Man” is still an essential record for fans of Finesse, D.I.T.C., vintage early 1990’s rap music, or all of the above.