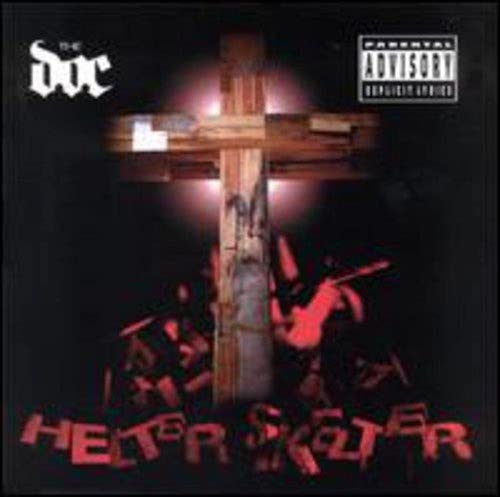 “No One Can Do It Better” is one of my all time favorite albums. It’s one of those albums that would come up if someone forced me to make a short list of music to be stranded on a deserted island with. Of course nobody bothers to explain what you would do for electricity in such a situation. Would you somehow have an unlimited supply of batteries? Would your boombox be solar powered? Whatever. If I found myself in such an unfortunate situation, songs like “It’s Funky Enough” would keep me bobbing my head as I whiled away my time fishing and collecting seashells.

That’s why “Helter Skelter” is off to an unfortunate start only two tracks in. As I noted in a prior D.O.C. review, Tracy Curry survived a horrific car accident in 1989, one which left his vocal chords permanently damaged even after life saving surgery. For a few years this wasn’t a problem, as the gifted lyricist spent his time ghostwriting raps for Dr. Dre and other emcees on Death Row Records, but he soon became disillusioned by the lack of respect not to mention financial compensation the label showed him. This album’s title was a middle finger to Dre, who was already collaborating with Ice Cube under a similar name. Re-recording “It’s Funky Enough” under the title “Return of Da Livin’ Dead” was his second finger up. It’s the same beat, it’s the same rapper… and it’s just not good.

The raspy voice is something listeners can forgive. It’s not D.O.C.’s fault that he sounds like that. “Hope you get your voice back G” he quips in the song, and while he clearly didn’t, it’s the production that really makes you wince. The same elements from the original are recycled for this new rendition, but they don’t THUMP. It’s not that D.O.C. did a bad job self-producing the song, but he somehow failed to paint the same picture despite following Dre’s brush strokes. It sounds like a pale imitation of the original song, which is unintentionally apt given D.O.C. has suffered a similar fate.

“Helter Skelter” is also an incredibly bitter album. “To be a bitch you don’t necessarily have to have a pussy in your pants. In fact… most if not all of the bitches that I know have little peckers — little dicks.” I get why Mr. Curry is salty after his experiences with Ruthless Records and Death Row, but “From Ruthless 2 Death Row” has an Isley Brothers sample that makes me want to hear something SMOOTH — not an angry dude with an incredibly scratchy voice. “The I.N.C. Ride” by Masta Ace would be a better choice, as would Messy Marv’s “Ghetto Blues” or 2Pac’s “Bury Me a G.” The vitriolic feelings don’t fade on the album as “4 My Doggz” opens with a sample taking direct shots at N.W.A, and then references Ice Cube’s “No Vaseline” doing the same.

It’s amazing in hindsight that he released this as a single. He’s mocking every Death Row member one after another — Snoop, Dre, Daz, Kurupt — and although it’s a fearless display of bravado it doesn’t even have the pleasant musical backdrop of the previously discussed tracks. The punchlines aren’t even good by D.O.C.’s standards, raspy delivery or not. “I know you wanna do me but you cain’t/slam that punk ass like Shaq in the paint/Cause I’ma do like Jordan, come back anyway/Make the whole world understand what I say/Cool, drop +The Next Episode+.” Mentioning that song was a stretch, as was his Warren G reference following it, but let’s just call the whole song what it is — DESPERATE. It’s the rap equivalent of “NOTICE ME SENPAI” and it’s beneath D.O.C. to beg his old labelmates to pay attention. The album’s best moments come from guest appearances like Jamal and Passion on “.45 Automatic,” because at least they aren’t trying to pick fights with people who aren’t going to respond.

Mally G also returns for “Erotix Shit,” which despite a weird title turns out to be a highly enjoyable posse track that even features the late MC Breed. It’s good to hear his voice again but it’s really not good to hear The D.O.C.’s. Aside from having an axe to grind with a voice to match, “Helter Skelter” clocks in at an audacious 69+ minutes, even having the temerity to offer a “bonus track” called “Crazy Bitchez” that isn’t any kind of bonus at all. It sounds like it came at the end of a long recording session, when Curry’s already damaged vocal chords were strained to the breaking point, and he ends up sounding like the wino he portrayed on N.W.A’s “Don’t Drink That Wine” skit. It’s not good, and neither is this album. The only good thing I can say here is that he learned from his mistakes and didn’t make himself the star of his third album. Credit to Erotic D on production for the tracks that work, but it’s best to only listen to the songs with guests and call it a day.