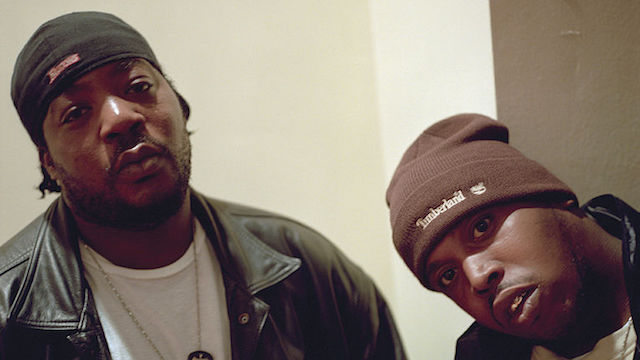 An ode to the Mash Out Posse – Part 7

The duo cut frustrated figures, attacking Loud Records and the label situation they were in during the early 2000s. This beat has that recognizable M.O.P. bounce few other artists manage to pull off and pairs the soulful backing with ferocious raps and get this – SCRATCHING. It’s a rare treat to hear a DJ cutting it up and I always enjoy how M.O.P. know how dope their own vocals sound scratched up.

“I’ll drink that six-pack with ya, so I can say I was under the influence when I hit ya” – Billy Danze

M.O.P. embody their influences and heritage, having grown up in New York during the birth of hip hop through to its emergence from the soul and funk era, and it shows on each and every record they release. This saxophone-driven back-and-forth is laid back, but throw some kicks over it and then suddenly turns into a bruising breather between two of their best songs: “On the Front Line” and “Follow Instructions”.

I always found this Premier remix an oddity in his discography, boasting a beat that almost sounds goofy. It remains enjoyable but compared to the original, lacks the cutting edge that makes it a classic single evocative of its war-filled depiction of the near-future.

A posse cut with M.O.P. stealing the show (as usual) at the end. Essentially a song full of basketball puns and wordplay, Billy has a few lines that lean that way before Fame ignores the concept entirely, instead intent on gunning you down. The video is a fun reminder of the creativity a big collaboration can bring and has a standout Joell Ortiz verse from pre-Slaughterhouse.

“Line these motherfuckers up in alphabetical order
YEAH, fuck around and get your whole team slaughtered” – Billy Danze

The throwaway hook lets down a fucking monster of a record that is typically imposing, as Snowgoons beats usually are. It might be one of a few songs where the beat manages to out-shoulder-barge Billy and Fame to steal the spotlight, as they deride Twitter and fellow Brownsvillain Spike Lee. Savage.

Proper 90s NY hip hop from Nick Wiz, with Billy and Fame kicking off proceedings for this sparring session. Pudgee was underrated and has some great tracks in the vault, but this is a bunch of unrelated verses thrown over a dope boom-bap instrumental. Billy shouting out Pudgee is the most cohesive part, but considering it’s impossible not to nod your head to, it’s an easy pick for #120.

A chaotic, stop-start loosie with some deft scratching, this is proper mixtape material that doesn’t waste a second of airtime despite not really being about anything in particular. It just has that dope Hilltop flavor.

“Handle your issues, let’s make this official
Before I put my fist on my pistol and it’s forced to lift you” – Lil’ Fame

Fame’s flow! This is a refreshing barrage of rhymes as the duo gift us one of their most effortlessly delivered back-and-forth tracks. The beat and hook are less memorable than the actual verses which is rare given their talent for crafting anthems, yet “Live From Ground Zero” feels like an experiment that worked, yet didn’t quite reach its potential.

I’m a big fan of the piano-pounding beats from “Street Certified” and “Hustle” is a successful mix of hood nostalgia and smooth, California-swagger. Just don’t tell Fame, as the word swag isn’t in his vocabulary.

“Give it up to Biggie Smalls, the last king of New York
They want your crown but they’re all drag queens of New York” – Lil’ Fame

Also found on the Bad Boys 2 OST, this vehicle for familiar voice Foxx (usually heard hyping up M.O.P. on their albums) is a rare chance for her to shine. Foxx (billed on the OST as Sheritha Lynch) even admits rapping isn’t her thing but with Billy and Fame assisting with the adlibs, it’s hard to tell.

“I’ll leave your inner body out of place” – Billy Danze

Sinister and ready to inspire a genocide, this warm-up to “Cold as Ice” is a well-placed album cut that is about as subtle as a dry slap. The irony of this assault on the senses is it’s a distraction, as M.O.P. claim to be operating as killers in the background.

“I’m major but I’m minor to Ebro, touring all the time what the fuck do he know?” – Sean Price

Lil’ Fame and Sean Price have a lot in common as far as ignorant rap laced with humor goes, so “Price of Fame” was a predictably excellent one-two punch to the gut. “Big Guns vs. Lil Guns” sees Billy Danze join the two for a blunt attack on Hot 97, white boys, Snapchat and everything else in between. Fame really nailed the Sean Price sound on the beat too.

Heather B returns the favor for this sequel, with a Beatminerz production that’s funkier than the grimy original. It continues the theme of loyalty and brotherhood but feels more like a remix than a full-blown new song. Memorable spin on a New York classic.

From Frankie Cutlass’ compilation, this rare collab between Mobb Deep, Kool G Rap and M.O.P. is an overlooked gem. G Rap stands out as expected, but to hear him followed by prime Prodigy is a real treat. Billy and Fame are reduced to hook duty but that’s the only real disappointing facet of a solid trip through the minds of Queensbridge’s dark and dangerous street poets.

Billy and Fame join Tony Touch for another of his vaunted “50 MC” mixtapes and Fame immediately warns the other 48 he’s lined up coffins for them. It’s just brilliantly audacious and further proof M.O.P. can hang with any emcee.

“Being broke keeps you loyal to fam'” – Lil’ Fame

What could easily pass for some snappy R&B is actually just a friendlier M.O.P. song. Less a rags-to-riches story but a rags-to-comfortable one, nonetheless a dope single that, unfortunately, fell victim of record label wranglings.

“Hardcore is what we know, it’s our life into the music,
We put it on wax and the mainstream refused it” – Billy Danze

Of all the tracks to sound formulaic, this forgotten collab with Teflon tries to recapture the success of 1994’s “How About Some Hardcore?” but instead of asking if fans want to hear hardcore, it’s “rawness”. They are pretty similar, but this is a solid track from Teflon’s rare debut LP that few remember.

As the Brownsville duo adopted the DJ Premier-assisted production and DR Period upped his game, “Illside of Town” feels like a throwback to their debut more back-and-forth style. Billy Danze gives a fiery performance that feels difficult to capture in a studio – somebody must have robbed Billy and thrown him in a booth to record because he’s pissed.

Originally part of their debut album, this track also features on 2004’s “Marxmen Cinema” for some reason. It’s aged better than some of their other early work, and the use of “motherfucking” in their bars shows an influence from Scarface and the Geto Boys, which makes sense considering Fame cites Big Mike‘s work as influential (and underrated).

This direct attack on anyone coming for Billy and Fame is, aside from the song title, one of their more creative efforts. Listening back to these old CDs, Fame’s flow continues to impress but it’s Billy’s implementation of a bullet per bar, essentially declaring who each bullet/bar is for and why, that makes this forgotten track from the “Marxmen Cinema” compilation, of particular interest.

This raucous number is tucked away on J-Love’s “Return of the Warriorz” mixtape and is probably not part of any official M.O.P. project because of the muffled vocals. It’s a shame because Fame delivers one of his angriest verses of his career (which is saying something) – a whole 16 dedicated to how he’s going to dismember and stab any two-faced bitch in BOTH of their faces.

If any rappers personified the term power, it’s M.O.P. and with a warcry of “We roll through with tremendous force” you’re getting exactly what you expect. Amongst all the tough rhymes is a poignant moment where the guys reveal their bad behaviour as youngsters was a cry for help, a reaction to being born in society’s mess. Rarely do M.O.P. look at their environment from a wider view but this glimpse into their purpose, and their ability to capture their experiences in Brownsville and mould it into special, powerful music cannot be understated.

There were a few Symphony tracks at the end of the millennium. Truck Turner’s “Symphony 2000” which featured Big Pun and KRS-One was solid, as was EPMD’s song of the same name, a single from their album “Out of Business”. M.O.P. also appear on this album, with a track simply titled “Symphony” that has the same beat as the single (“Symphony 2000”) – I’m guessing they wanted to capitalize on Red and Meth’s fame in 1999 and put them on the single instead.

“N****s fuckin’ with my nerves like multiple sklerosis” – Lil’ Fame

RZA’s film The Man With the Iron Fists is a predictably visceral take on the martial arts movies that influenced the Wu-Tang Clan. “Black Out” brings the concrete-tough pugilism of M.O.P. in for a haunting collaboration with Ghostface Killah and Pharoahe Monch, two emcees who rarely disappoint. Again, it feels like an M.O.P. track that features the others, but hearing Pharoahe’s tongue-twisting description of destroying opponents is as visually acerbic as the film its scoring.

An insane posse cut from RA the Rugged Man’s best album yet, M.O.P. are on hook duty and tie the onslaught of iconic rappers verses together nicely. They finish the track with a few bars too because despite Ice-T having the final verse, it wouldn’t be right without Billy and Fame putting the full stop on a bold statement of a song.