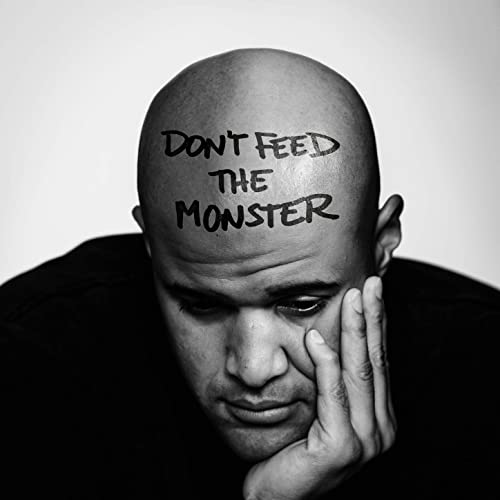 There is a Cherokee story in which a grandfather describes to his grandson the battle between two wolves that wages within all of us. One wolf represents greed, hatred, jealousy, laziness, arrogance, falsehood, ego, and resentment. The other wolf represents kindness, compassion, empathy, love, truth, and humility. “Which one wins?” asks the grandson. “The one you feed,” responds the grandfather.

Brooklyn rapper Homeboy Sandman’s latest album is about not feeding the bad wolf on “Don’t Feed the Monster.” It is a starkly personal and (mostly) serious album from a rapper who is better known for being carefree. It is also his second album with Mello Music Group, a label that seems to be fueling Homeboy’s creativity.

The album starts off with “Trauma,” an intensely personal song that lays out the trauma in Homeboy Sandman’s upbringing, including physical, emotional, and sexual abuse.  One of the things that is so powerful about the song is how he describes acting tough as a defense against the abuse, and how that strategy didn’t play out well in the long run.

“My father always taught me men are not supposed to cry
So every bit of pain I ever had I locked away
But now I’m here to let you know that that is not the way
I thought that I had tricked myself, thought I was being slick
That fantasy departed when I started getting sick
The doctors couldn’t tell me any way to make it stop
My soul was under too much pressure it was gonna pop
It turned out that the only way that I could ever heal
Is start to work through all the trauma I had kept concealed
It hasn’t happened overnight
I know that it might take a while
May even take a life
But one way or another I just gotta make it right
Right?”

Much of the album’s lyrics deal with similar content. “Stress” is about not letting stress get you down; “Scare You” is about how the media and people around us try to keep us scared and defensive; “Don’t Look Down” is about overcoming fear; and “Monument” and “Walk by Faith” are about being optimistic and having faith. There was something frankly healing about hearing Homeboy Sandman rap about not giving into fear and keeping hope alive.

He’s not all serious, though. He takes on being an old rapper on “Extinction,” calls out biters on “Biters,” and details the misadventures of his punctuality-challenged girlfriend on “Waiting for My Girl.” As always, Homeboy Sandman’s rhymes are intricate and delivered effortlessly in his somewhat exaggerated style.

Lyrically this is a stronger album than last year’s excellent “Dusty.” Where I had issues with this album is in the production. Quelle Chris takes the boards, offering his trademark off-kilter beats. His style is crate-digging and psychedelic, but of the bad trip variety. I appreciate him as an artist and producer, but his music is consistently unsettling. His beats are always just sort of off. There will be an out of tune piano, or a toneless whine, or it will be slowed down in a weird way. The end effect is that the music ends up being a little abrasive and hard to take in large doses, at least for me.

That said “Don’t Feed the Monster” is yet another solid Homeboy Sandman release and a fitting album for 2020. It’s great to see an artist continue to improve this deep into his career, and I can’t wait to see what Homeboy Sandman drops in 2021.