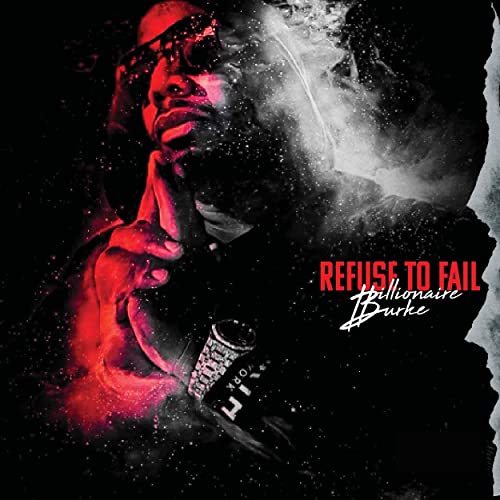 “Refuse to Fail” is a damn good motto. That’s a fine place for Billionaire Burke to start. He has a name that makes him sound like he should be part of Cash Money Records or Maybach Music Group, but Burke hails from East Harlem and is distributed by EMPIRE. Maybe he’s like A$AP Rocky in that he’s inspired by the Dirty South but doing it with his own New York flair. I’d even argue he takes it further than Rocky ever did. Most of Rocky’s songs feature a more traditional rap delivery, but Billionaire Burke is clearly from the cough syrup medication school of AutoTune, warbling his way through pitch corrected songs like “In Da Trap.”

When you can understand what he’s saying there’s unfortunately not a lot of depth to what’s being said. It doesn’t take an incredible writer to rhyme “trap” with “that” and “straps” — in fact given the lack of “P” it barely holds together as a rhyme at all. It’s an imperfect rhyme at best. He does it again at the start of “All In” — “I know you love it when I’m all in/Yeah I know your ex-man was boring/Now I got you sliding in the foreign.” It’s entirely on the strength of his conviction to belt out these bars that it even works at all, so let’s at least give him credit for the charisma.

I’d like to peel back the curtain for a moment here. While doing research for this review I could only find one bio for Billionaire Burke, which unironically stated that he’s “on track to become a household name in 2020.” At the exact same time I read those words I was listening to his album through YouTube Premium (a choice I made to save my sanity during election season) and no track had more than 66 views. I’m not knocking him too hard for it because “Refuse to Fail” just dropped November 27th and he doesn’t have an official single/music video for any of these songs yet. The numbers will undoubtedly go up before long. The problem is that when you’re really on track to be a “household name” your numbers won’t be in the low double digits the first 2-3 weeks — they’ll be in the thousands, tens of thousands or HUNDREDS of thousands. “What Do U Mean” Burke? You’re nowhere near “household” as of the writing of this review.

Something needs to stand out for Billionaire Burke to become what his bio (which increasingly feels like a sock puppet edit) says he is. Nothing does. His rap is below average, his singing is below average, and his music is slightly above average. He’s not a great storyteller, he’s not connecting on an emotional level, and he’s not painting cinematic pictures with his words — when you can even make them out with all the after effects, that is. As I said “Refuse to Fail” is a damn good motto, but you’ve got to do more than just say the words. You have to make it happen. If this is Billionaire Burke’s best effort then it’s just NOT going to happen.