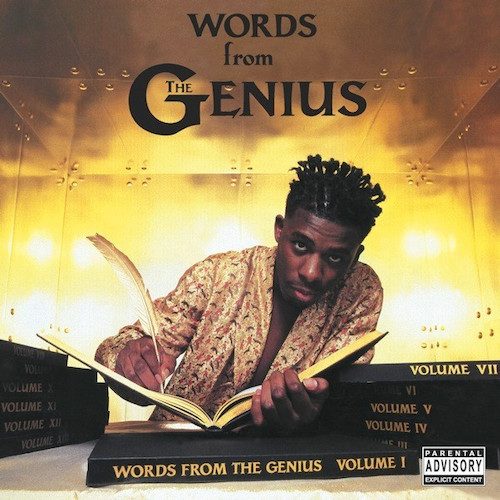 Words From the Genius

The Genius (GZA) :: Words From the Genius

On Wu-Tang Clan’s first commercial single “Protect Ya Neck” GZA delivered a brutal takedown of the music industry in the last verse: “First of all, who’s your A&R? A mountain climber who plays an electric guitar? But he don’t know the meaning of dope when he’s looking for a suit and tie rap that’s cleaner than a bar of soap.” The intent seemed clear to all who listened — Wu-Tang Clan is not your crossover, cookie cutter, artificially flavored and nutrient deficient rap group. We’re raw, we’re fresh, we’re the antithesis of the mainstream. Gary Grice’s animosity toward the system would manifest itself again on “Labels,” the first single off his epic solo album “Liquid Swords.” I was starting to think this wasn’t just a “keep it real/keep it underground” thing for GZA — it felt like this was a personal beef to him.

Oh it IS personal. Let there be no doubt that GZA had every reason to be vexed by “Words From the Genius.” Release February 19, 1991 on Cold Chillin’ Records via Reprise/Warner Bros., the album was set off by the Jesse West produced “Come Do Me” and an accompanying music video that for all intents and purposes tried to make him Big Daddy Kane 2. It’s no accident that they were signed to the same label, or that Grice spends the whole song macking on honies while sporting his freshest clothes, or that West (a/k/a rapper 3rd Eye) gave the entire song a Teddy Riley style new jack swing. Those “electric guitar” playing executives picked out a marketing strategy for The Genius, shoved a square peg into a round hole, and the album was doomed from the very start.

The irony of Grice dropping a song on “Words From the Genius” called “Phony As Ya Wanna Be” should be lost on anyone, but if we’re giving GZA a fair break, “Come Do Me” is an anomaly. In fact it’s so out of place compared to the rest of his debut album that when Traffic Entertainment tried to cash in on Wu-Tang Clan’s sudden popularity by re-issuing the album, they took “Come Do Me” off the CD entirely and replaced it with the previously unreleased track “Pass the Bone.” Maybe they were inspired by the fact Grice referenced the song on Wu-Tang’s “Clan In Da Front” when he said “Pass the bone! Kid, pass the bone/Let’s get on this mission like Indiana Jones.” Nah. More likely GZA was dropping an easter egg referencing a track he thought his fans were never likely to hear. Bet he was surprised!

Not only was the new track an immediate improvement over the ill-conceived “Come Do Me,” it arguably goes down in history as the seed planted in the fertile New York soil that grew into the Wu. Prince Rakeem shared the track with The Genius, and he too had suffered from Industry Rule #4,080 with a poorly marketed and executed crossover single called “Ooh I Love You Rakeem.” It’s not entirely his fault it flopped (sample clearance is a bitch and he had to re-record it) but it’s not hard to see he found a like-minded, artistically frustrated rapper in The Genius, and for them to rechristen themselves as RZA and GZA while the Clan coalesced around them was almost inevitable.

A significant portion of “Words From the Genius” is produced by Easy Mo Bee, who to this day still doesn’t get the recognition he deserves for lacing some of the best tracks in rap history. A great instrumental needs a great emcee though, and The Genius lives up to his name on songs like “Drama.” It may not have the rough-and-rugged Wu-Tang sound you know GZA before, but the intellectual thoughtful lyricism was there from day one. Grice was always an observer of human nature and a natural story teller who could put those words on wax in a compelling way.

“It’s getting hot, how hot, hotter than July
cause the murder and crime rate is rising very high
For example, in my neighborhood, it’s so hot
I’m often woke up, from the alarming sound of a shot
So I’m thinking what, is my neighborhood a trap
Could this be the place marked X on the map?”

That’s not to say there aren’t some problematic moments on his debut that aren’t new jack swing related. “Stay Out of Bars” starts off well enough, and even echoes an age old complaint of mine when I see people pouring expensive whiskey over frozen water: “Who the fuck needs ice inside of burning alcohol?” WORD. His warnings about the dangers of becoming inebriated and then getting into sexual situations without thinking about the consequences seem very sage, especially given rappers often promote drinking and promiscuity, allowing fans to live vicariously through their escapades. This would be all well and good if the song didn’t take a left turn into vicious homphobia in the second verse. GZA is so appalled by a girl he thought was fly who had “a voice deeper than Barry White” that he “pulled out a nine and empt(ied) the whole clip” until the place was “flowing with crazy blood.” For fuck’s sake Gary, was that really necessary?

Yeah I know. Gay bashing and transphobic attitudes have been part and parcel of rap music from the outset, being birthed in a nation that hasn’t ever reconciled the fact liberty, freedom and justice aren’t reserved solely for heterosexual white males of European descent. There’s another irony that should not be lost on anyone — people who fled from persecution in Europe who are all too happy to persecute everyone not like them. I’m not giving Gary Grice a pass on this one just because the United States is its own unique brand of fucked up and backward, I’m just saying I understand why “faggot” and “queer” seem to slide under the radar as offensive in rap. (If you want a real eye opener though try viewing BDP’s “We In There” through a modern lens. It’s hard to listen to now.)

For the most part when GZA/Genius/Grice sticks to songs like “Life of a Drug Dealer” everything is gravy. Mo Bee delivers a solid beat and Grice returns the favor with a cinematic tale of a street entrepreneur who is “physically gaining power/constantly counting up cash by the hour.” You might expect there to be a comeuppance or a downfall to punctuate the end of the tale, but The Genius is content to let you draw your own conclusions about whether or not the song’s anti-hero ever meets his demise. Sometimes it’s just enough to tell the story well and authentically, and for nearly four minutes he puts himself in the dealer’s perspective and visualizes the life along with all the challenges it entails.

“Words From the Genius” doesn’t go down as an all-time classic. Grice himself has stated that he’s proud of the album and that he’s amused that the industry tried (and failed) to cash in on his work twice, never quite grasping what he and his soon-to-be Wu-Tang Clan comrades were about. There are plenty of worthwhile moments here though. The anti-violence “Stop the Nonsense,” the braggadocious “Feel the Pain” and the Patrick Harvey produced “What Are Silly Girls Made Of” stand the test of time even without the trademark dirty, grimy, kung-fu sampling sound GZA would become better known for with RZA’s help. This is pre-Wu, this is proto-Wu, but it’s not hard to see what Gary Grice would become in short order.