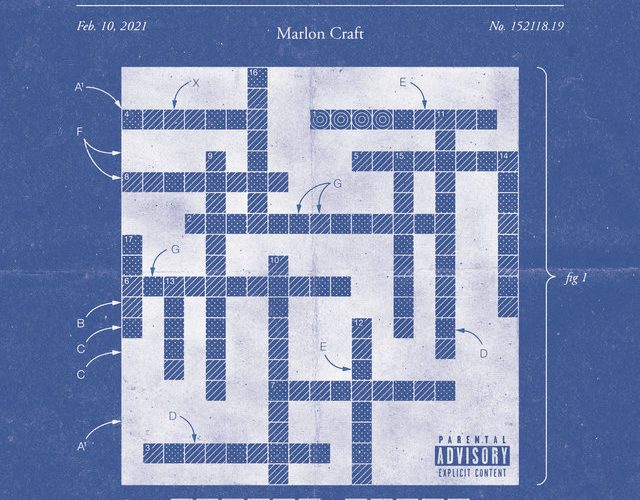 Marlon Craft :: How We Intended

It’s been two years since Marlon Craft released “Funhouse Mirror”. The Hell’s Kitchen emcee turned heads with the album’s lead single, “Gang Shit”, which showed not only creativity, but levels to Craft’s social depths. Like most, he certainly had big plans for 2020, and again like most, those plans were derailed. Perhaps that’s why this album was titled “How We Intended”, as it’s a declarative statement that holds a double entendre: On one hand, everything truly is going according to plan; on the other hand, it reads as “not as how we intended.” If “Funhouse Mirror” was an examination on how the world is distorted, then “How We Intended” is a meditation on uncertainty in the CO-VID 19 era and builds on some of the themes from his 2020 EP “Work From Home.” Though the album does not contain lauded high-concept tracks like “Gang Shit”, the fact is that this is a different album altogether. Craft himself juxtaposes his confidence and the theme of uncertainty on “Interlude (Pay Intention, Pt. 1)” when he says, “But while my rhymes were on, my mind took me out of the present.”

As with previous efforts, the production here has a jazz sound to it which is given the added element of organics by multi-instrumentalist/producer Dan Edinberg, who has a production credit on most of the album’s tracks. Most of the album’s tracks are credited to multiple producers, the exceptions being “Get Off My Yard” (which was laced by Logic producer 6ix), “The Workin Man” and “At The Door” (both of which were produced by Craft’s mainstay producer, Arbus beats). To start things off is the bass-driven, ironically titled “2020 Intro”, which is part introspection and part braggadocio with bars like “I make the jazz cats listen to raps / I make the hood kids listen to sax / I make the white dudes understand which straws they pull out they ass.” 6ix shows his musical versatility on the genre-bending “Lot to Give”, combining melancholy piano key notes, a sax coda, and some marching band snares. The fan-favorite “Hoodie Weather” is included, with Craft taking aim at the injustices around him which piss him off:

On the ironically titled “Offbeat”, Craft adopts a faster flow to big-up his significant other over some boom-bap production. There’s a similar flow and musical sound on “Grateful”, which is a great big “Thank You” to everyone in Craft’s life who’s ever had any kind of influence on him, be it good or bad. “Tell Me Today” has some soulful piano keys at the beginning. Picking off of “Grateful”, Craft’s lyrics focus on living here for today instead of waiting for the right moment to take action. “Wherever” has a playful bounce to the beat, but Craft spits his most aggressive raps on the album on the moody “Get Off My Yard”. Over metal snares and paranoid sirens, Craft displays his plentiful mic skills with these bars: “I’m ready as I ever been, my cocky be so elegant / That college head on him, we’re raised on New York City sediment / Combined to make my ‘suck my dick’ sound so eloquent.”

Beatsmith !llmind shares a production credit on the rapid-fire bouncy “Roadtrippin”, working to create a soundscape for Craft’s flow to run like quicksilver upon. Sometimes, the introspection can get redundant, but Craft makes up for it with poignant lines. On “Where I Am”, he spits “The recipe ain’t filled with gentle hugs / I make peace with ingredients that I get from thugs”; while on “Loyal”, he questions the actions of others who make it difficult for him to support them. For the record, this album is not a completely Marlon Craft affair. He’s got guest rappers included and they culminate in the form of a posse cut. Bobby Feeno, Radamiz, Oswin Benjamin, and Chris Rivers all form a starting line-up with Craft, knocking down their critics who think they’re not vets on the court of rap. But of all of them, it’s Chris Rivers who stands out as the shooting guard with tongue-twisting lines like “I put ten thousand hours / Pen pal to powwow / Was sent down to get proud, not bend down to cowards”:

Further guests appear on “Lookin’ Up” as Westchester, NY emcee Malz Monday steps up to the mic. Craft’s rhymes have always been there, but his wordplay is in full-force on “At The Door”, making head-turning word connections in his train of thought. Rounded out with “In The End” and an outro, Marlon Craft’s “How We Intended” is a solid listen. It may not have been how he intended, but as he himself spits: “It’s never gon’ look like how you planned it / But in every disadvantage, there’s a way to take advantage.”