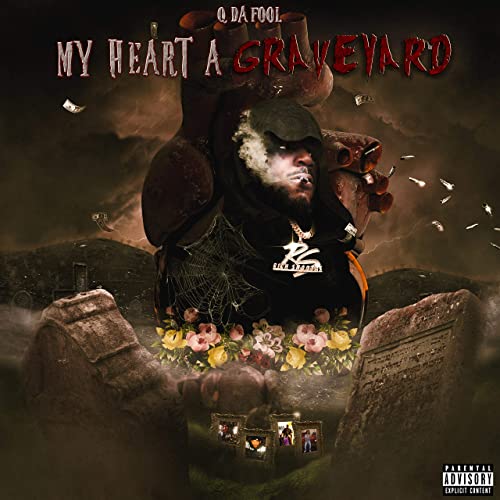 My Heart a Graveyard

Q Da Fool declares himself equally cold with the title of “My Heart a Graveyard.” The metaphor speaks to him being just like the corpses in a cemetery, with more ice in his veins than a stiff in Alaska, even though in his videos most of the ice is on his neck or wrists. Even though he wants to be more heartless than Sora’s enemies in a video game, the truth is he’s not “cold” at all. He’s RED HOT on songs like “Epidemic,” yelling into the mic that “moms know that I ain’t a saint” while aware that “Allah could take me any day” thanks to his lifestyle. For someone who says he’s colder than the Iceman I’m hearing nothing but rage. “Them pussies want beef cause they ain’t getting money! Fuck it I’m leaving ’em bodied in public!”

“Instagram niggaz I know they ain’t bust shit.” Q Da Fool has no shortage of haters then with over 200,000 followers on Instagram as of this review. It doesn’t hurt that the DMV rapper has been recording since 2013 (when he was in the Pakk Boyz), giving him almost a decade to build up a cult following in the area or beyond. That’s enough for him to tell off as many people as he wants on “Ima Legend,” where he calls anybody who isn’t as iced out or widely followed as him “peasants.” Obviously that works for a rhyme but it’s more amusing to hear him dismiss people like royalty, when usually he just calls a hater a “bitch” or a “pussy.”

“My Heart a Graveyard” is Q Da Fool coming into his own after grinding hard for almost 10 years to get to this point. Positives — he’s rapping, not singing (except on “Stop Talkin'”). His breath control is tight and his tongue is nimble enough to flip words quickly AND clearly. His music doesn’t offend your ears and the bass hits the speakers and vibrates your chest. He’s got a clear purpose that motivates him, and that’s talking smack to everybody that ain’t on his level.

Negatives — Q Da Fool is so singularly focused on his attack that his album is more like bare knuckle fighting. He’s looking to draw blood and concuss his opponents with every blow. That’s entertaining to a degree, but it’s loaded up with an extra unnecessary amount of misogyny. It makes me wonder who in Q Da Fool’s life did him wrong that every time he throws shade on someone he uses female slurs. Since Grammy award winning rap artists are reclaiming the word bitch (and female rap artists have always done so for that matter) it’s not as impactful as it used to be. Todd Shaw may have gotten famous off the word, but Q Da Fool is already a “Legend” in his own view, so I’d like to see him be more creative in his derogatories. “My Heart a Graveyard” is interesting but not quite legendary.