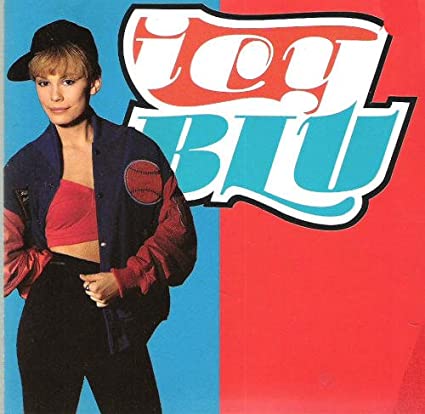 The runaway success of Vanilla Ice’s “To the Extreme” in 1990 led to a brief explosion of major record labels trying to find the next white rap superstar. Unfortunately for most of those labels, Robert Van Winkle’s success was also their downfall. Ice got so large SO FAST that every part of his life came under intense scrutiny, and whether it was his fault or not, a false image of Ice being “from the streets” was met with laughter, derision, and outright REJECTION from the hip-hop community. His career imploded as quickly as it exploded and took down almost every aspiring white rapper with him. Only established acts like the Beastie Boys and 3rd Bass survived the rejection of mayonnaise emcees in rap, with the latter doing so in part by making fun of pop rappers LIKE the Beastie Boys, Ice and MC Hammer.

Icy Blu never stood a chance. Giant/Warner Bros. had high hopes for her to be the female Vanilla Ice, but the rapper born Laurel Yurchick was a year into the backlash when her self-titled album dropped. The lead single “Pump It (Nice An’ Hard)” did her no favors. The song managed to rip off no less than four better acts all at the same time — the lyrical sequencing of Young M.C., the delivery of Tone Loc, the swagger of Salt-N-Pepa (who incidentally the song samples) and the sexuality of 2 Live Crew. The song’s driving beat and the record label’s incessant push of the track managed to make a small dent on the Billboard charts, ranking as high as No. 78 in the U.S. but inexplicably reaching No. 8 in Australia and No. 4 in New Zealand. Sophomore single “I Wanna Be Your Girl” peaked at No. 46 stateside but never topped the 88th or 15th spot respectively outside of it.

It’s unfathomable to me that this song charted higher here given it’s FAR WORSE. Blu tries to delivery slinky come ons in a breathless voice and comes off so cheesy that it’s a gigantic turn off. “It doesn’t matter to me, just as long as you are there/whispering sweet nothings in my ear/Saying that you care about the times we share/As you run your fingers through my hair.” It gets more nauseating as she sings her own hook to the track. Everything about this song personifies the meaning of A TRY HARD.

It doesn’t get any better on “Icy Blu” than this and that’s incredibly sad. Whoever was coaching Miss Yurchick through this carefully engineered attempt to crossover had no worthwhile ideas beyond the A-side and the B-side, leading to songs like “It’s Your Birthday” where she raps about how you’re entitled to be a spoiled brat as someone attempts to make the notes of “The Birthday Song” fit into hip-hop. The mock Rod Serling intro is the best part of the track. I’m not sure who produced “My Guitar’s Funky” but they should be pimp slapped for what they did to Ohio Players’ “Love Rollercoaster.” Yikes. “My Love Is Real” will make you wish it wasn’t. This was clearly meant to be a follow-up single to “I Wanna Be Your Girl” but Icy Blu fizzled out long before anyone at the label even had the chance.

Every time a parent or a guardian told you the phrase “you can’t judge a book by its cover” they were absolutely right about people and absolutely WRONG about this album. You can tell someone at the cover shoot told Miss Yurchick exactly what to wear, letting her leather sports jacket hang open just enough to show nothing but a bra on underneath, with one hand suggestively moving toward her snootch while the other is playfully tucked behind her back. The hat is turned rakishly to the side to suggest “I’m a b-girl, standing in my b-girl stance/hurry up and gimme the microphone before you bust in your pants.” I’m sure they thought this would be alluring to horny teenage boys but post Vanilla Ice it looked and felt SO PHONY. The good news for Icy Blu is that her self-titled album isn’t the worst thing I’ve ever heard, but that’s setting the bar so low a mouse could jump over it.