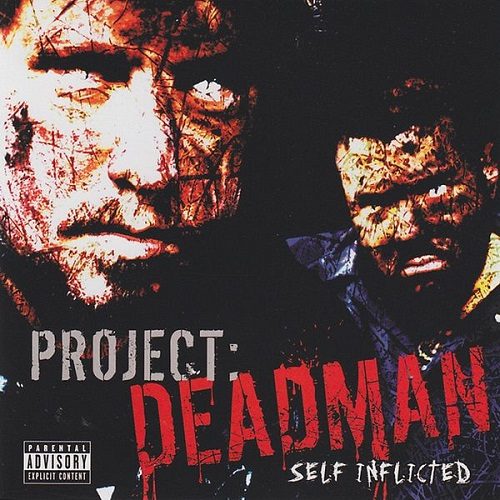 “Consisting of members Mike E. Clark and Prozak, Project Deadman is a super-group formed in 2003 from the Detroit area.” So says the Project Deadman bio found on the Strange Music website, although personally this writer was a little mystified by this claim. To create a “super-group” in music, labels and artists bring together well-known musicians from other bands or projects and and put them in one package hoping the results together will exceed what they would do on their own. An example of a “super-group” would be Audioslave, with former Soundgarden vocalist Chris Cornell and the former band members of Rage Against the Machine; or the Damn Yankees, which starts with guitarist Ted Nugent and goes on to include Styx band member Tommy Shaw and Night Ranger bassist/vocalist Jack Blades among others. The one thing they all have in common is that they were well known before they formed a “super-group.” Are Mike E. Clark and Prozak well known? Maybe in their native Detroit they are, and if I still lived in Eastern Michigan it’s more likely I would have heard of them. As it stands though, as of the writing of this review, they’re as much a “super-group” as I would be if I formed a rap group with my homies Chad and Dave and called ourselves “Three Dorky Whiteboys.” In other words, the term “super-group” here is both meaningless and insulting hyperbole, and doesn’t help an already little known group get any more over than their music would by itself.

From the name of this group and the cover of their album alone, you might presume that Project Deadman are on some Detroit horrorcore shit in the tradition of Esham and the Insane Clown Posse. You’d be half right. The beats are all produced, mixed, and recorded entirely by Mike E. Clark, and he’s on that “gritty and grimy” shit that is synonymous with horrorcore style songs. “Corporate Lies” is typical of the style – a single guitar riff repeating in the background, heavy pulsating bass, and strong drums pounding like your heart after a good scare. The lyrics aren’t about eating faces and gnawing on bones though, at least in this song. Rapper Prozak is going after something which ought to be much more scary – our lives being taken over by faceless inhumane conglomerates:

“Prozak is droppin bombs, like the Cuban missile crisis
Havana, the satellite systems are tracking the voices, bar codes
GPS, solar radiation from your cell phone
DNA clones chromosomes and yet we all condone
Mass production equals depletion of the ozone
Consumerism causes death to organisms, mainly human and animal
The war machine is cannibal”

Prozak certainly has the voice of a horrorcore rapper though – dark, low, and growled like his lungs were full of soot. It’s an interesting mixture to hear such political sentiments coming from a group that looks like walking zombies. Their song content does walk the dark path into “terrifying shit that’ll make a motherfucker scream” as described on “The PDM is Coming,” but often seems to have an unexpected political and social context, and a far deeper meaning than would be found in the raps of Shaggy 2 Dope and Violent J. “Self Inflicted” is a surprisingly uplifting song, pointing out that the pain of life can be overcome when you recognize how much of it you create through your own attitude and behavior. “Brain Dead” condemns phony “wicket shit” imitators who are in it only for a paycheck and not true to the art. “Last Breath” explores the metaphysical side of death, and really caught me by surprise when Prozak compared it to “walking parallel universes.”

Although the music can at times get to be repetitive, and Prozak’s gruff vocal stylings may be hard to take over long periods of time, there is defiintely something more than meets the eye to the “Self Inflicted” debut of Project Deadman. Whether or not they earned the distinction of being a “super-group” is debateable, but what’s not is that among a music scene where it’s often hard to discern talent among all the macabre beats and rhymes, Project Deadman stand head and shoulders above the rest of the graveyard. Their album is not for everyone, but the time and thought they put into it are clear to see and enjoyable if you give it the chance.