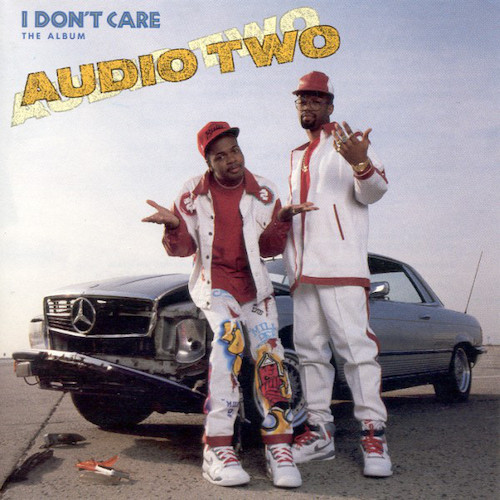 I Don't Care: The Album

If you’re of a certain age you can recite the entirety of Audio Two’s smash hit “Top Billin'” word for word. The drum beat that made the song famous is The Honey Drippers’ “Impeach the President,” but the way Audio Two and co-producer Daddy-O (Stetsasonic) slowed it down and amped it up turned into something brand new. In fact his take on the beat wound up becoming a sample in itself for dozens upon dozens of songs, one that I immediately noticed the first time I heard Mary J. Blige’s “Real Love.” I couldn’t help myself — I’d start rapping “Emcee am I, people call me Milk, when I’m bustin up a party I feel no guilt” every time it came on.

The lyrics of Milk Dee on the track became samples in their own right, cut and scratched in dozens upon dozens of songs. Arguably “Top Billin'” is one of the most referenced rap songs by other rappers in all of hip-hop, and the Audio Two tandem of Milk Dee and DJ Gizmo (a/k/a Giz) were not immune. Having banked one memorable hit they seemed to endlessly iterate on it, starting with an album named “What More Can I Say” (one memorable phrase from the song) and ending with “I Don’t Care: The Album” (yet another Milk Dee quote). They couldn’t escape their own long shadow. Even this album’s lead single “On the Road Again” samples their biggest hit.

I wish I could be kind but “On the Road Again” takes this tendency to an utterly absurd length. The song doesn’t just feature Giz scratching in “Top Billin'” samples — Milk Dee samples himself by repeating his own catch phrases from the song. “What more can I say?” “Dance until your breath is gone.” The only thing missing was “Stop scheming and acting hard, I got a great big bodyguard.” It’s not just that Milk and Giz can’t stop milking their big hit (no pun intended), it’s that Terence Quentin Dudley’s production is some horrible mash up of new jack and dance club that’s awful to the ear. They may have realized it was bad when they went back to the lab for the second single, but “I Get the Papers” is even MORE self-referential.

It’s shocking to see a talented and charismatic rapper like Milk Dee play himself out to this degree. Most artists would rather not be thought of as a one hit wonder, but Milk runs toward it and embraces it with a BIG BEAR HUG. No matter how much you’d like to see Audio Two move on to greater heights, they keep pulling themselves backward to where they got started. It only makes matters worse that Milk has some terrible song ideas and stunningly whack rhymes. Everything about “Undercover Hooker” should have been reconsidered, including bars like “I jump start the heart of a cutie/get her in the MOOD-y/now it’s time to hit the booty.” WHAT?!

What gets lost in this audio mess from Audio Two is a posse track called “Start It Up Y’All” that has stood the test of time. Self produced by Milk Dee and featuring First Priority brethren MC Lyte and Positive K, this is the one song from “I Don’t Care: The Album” worth going out of your way for. The rappers are clearly having fun on the track, referencing old school call and response routines they grew up hearing on the hooks and outro, while spitting up to date flows and references for the actual verses. You can imagine that they walked in the studio, lit a few joints, and started dropping freestyles just for the fun of it. It’s DAMN good.

Moments like this are the saving graces of Audio Two’s second album. MC Lyte returns for “6teen,” the funky bass riffs of “When Milk’s on the Mic” are never dated, and “The Nasty” recycles one of my all time favorite samples — Fred Wesley and The J.B.’s “Damn Right I’m Somebody.” If you’re as old as this record (or me) you’ve heard it in everything from 3rd Bass’ “Pop Goes the Weasel” to Geto Boys’ “Ain’t With Being Broke.”

I can’t help but notice though that Milk Dee is pushy about his sexual escapades in a way that’s grossly misogynistic even by 1990’s standards. “Huh! I’m willing and I’m waiting/Are you or are you not, participating?/To me it’s plain and clear/If you wasn’t with it, you wouldn’t be here.” Hey Dee, BACK THE FUCK OFF BRO. If she’s not feeling it, put your ego in check, show a little respect and step to the side. You’re getting extremely close to “date rape” territory here. That’s the other strange thing about listening to Milk rap — he goes from sounding clean cut and friendly to calling people “faggot” in the blink of an eye. Despite a few good moments here and there, a lot of “I Don’t Care: The Album” is hard to reconcile, especially given that like the aforementioned woman above Milk and Giz seem to have a problem letting go and moving on. It’s best this was their last album.