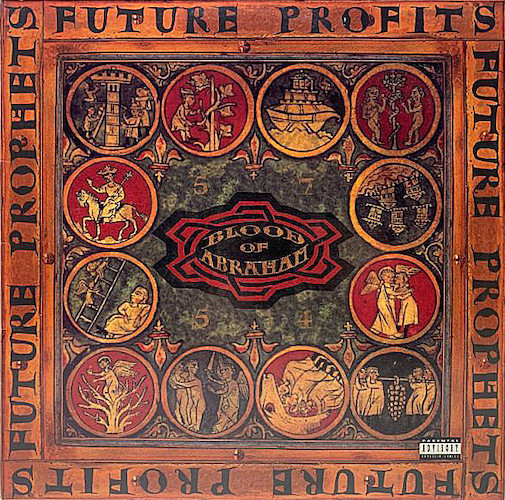 Ice Cube’s most famous diss song “No Vaseline” had some especially pointed comments aimed at Ruthless Records founders Eric “Eazy-E” Wright and his attorney Jerry Heller. “Heard you both got the same bank account/Dumb nigga, whachu thinkin’ bout?/Get rid of that devil real simple/Put a bullet in his temple/Because you can’t be the +Nigga 4 Life+ crew/with a white Jew tellin you what to do.” Antisemitic? Undoubtedly. Cube was justifiably angry though at the way he was treated while in N.W.A, having ghost written a large percentage of the lyrics but receiving only a minimal share of the profits in return. After both Heller and Wright played him for a chump multiple times, he went solo and initially kept quiet about his feelings. N.W.A actually fired the first salvo by saying they “got rid of Benedict Arnold” and Cube’s response was so hot both coasts felt the flames.

The reason I’m telling you about this history is to give you some context for why Blood of Abraham became a thing. Although Jerry Heller never responded to Ice Cube on a song, which would have been a silly thing for someone who never spit a bar in his life to do anyway, “Future Profits” was his not so subtle shot fired back O’Shea Jackson’s way. By purposefully going out of his way to sign and promote a Jewish rap group composed of Benyad (Benjamin Mor) and Mazik (David Saevitz), he was countering antisemitism with representation in the rap world. “Stabbed by the Steeple” couldn’t make the intent more plain, going out of their way to say certain sects of Christianity had promoted hatred of Jews. The sample “Jews are the Christ killers! They tried to destroy the Christian religion” is exactly the kind of argument antisemites use to attack people of Jewish faith or heritage.

Furthermore one song on “Future Profits” attempted to exemplify the values of black and Jewish unity that Wright and Heller saw for themselves as partners in Ruthless. “Niggaz and Jewz (Some Say Kikes)” put forward the argument that both groups are discriminated against in the very same “AmeriKKKa” that Cube had been railing against, with Eazy-E providing his own bars on the song in support of the newest Ruthless Records act. What’s even more significant to me though is that it featured the first appearance that I know of from Will 1 X, who would be better known in later years as will.i.am from the Black Eyed Peas. The song title “Niggaz and Jews (Some Say Kikes)” was a guarantee no one other than buyers of BOA’s album would hear it, but as a show of cross cultural unity, it was impressive.

While there’s no doubt Benyad and Mazik were serious about hip-hop music and culture far beyond Jerry Heller’s attempt to prove a point, as evidenced by the fact Benjamin Mor went on to direct music videos for everyone from Nas to the aforementioned Black Eyes Peas, it doesn’t seem like the rap world was willing to give them a chance. “Future Profits” went over like a fart in the synagogue, with Jewish pride songs like “Father of Many Nations” not resonating in rap’s mainstream. For me there’s a great historical irony to this given that House of Pain had gotten over the concept of Irish pride in rap music just a year earlier on their self-titled debut. Apparently BOA was one step too far for most folks, which out to dismantle that other antisemite argument that “Jews run the entertainment industry.” Were that true BOA would have been at least as successful as HOP.

Perhaps the album’s real undoing though is a “try hard” feeling that runs through the presentation from start to end. I have no doubt Mr. Heller was pissed off by “No Vaseline” and rightfully so. It’s an incredibly funny song if you were alive at the time and heard Ice Cube roast his entire former group alive, but like many great diss songs it also contains some sentiments that are FAR from politically correct. Cube was in straight “scorched earth” mode though and didn’t care who he burned, while Blood of Abraham was a far more subtle rebuke by comparison. There’s no one song here that addresses him directly, but the group’s existence and Eazy-E’s presence ARE the response. That means Benyad and Mazik were pushed into the position of being the flag bearers for Heller and Wright’s message, so rather than carve out their own identity they had to promote Jewish heritage and identity as their defining characteristic. I have no doubt it is, but at a time when their label’s co-founder had ushered in an era of harder, street wise gangster rap, Blood of Abraham stood out like a sore thumb and got treated like a redheaded stepchild. The album is solid but it stood on shaky ground.