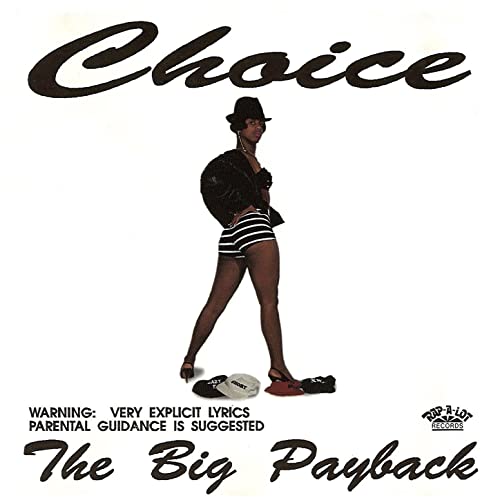 Female rap artists have been on the scene since hip-hop music was first commercialized for the masses, but so has the inequality in how they’re perceived and treated. Many of the earliest pioneers were treated as though they were inferior to their male counterparts, with broadly negative stereotypes about how women were “soft” by comparison being the norm. Even when rappers like MC Lyte and Roxanne Shante proved they were just as hard as the men, they still had to put up with being pigeonholed as exceptions to the rule. In a male dominated industry every label executive wanted to pat themselves on the back for how “progressive” they were by having a token female rapper on their roster. That’s not real progress.

Kim Davis a/k/a Choice was exactly that — a new choice for rap fans who were tired of tokenism for female emcees. Signed to Rap-A-Lot Records off the strength of a cameo on Willie D’s first solo album, she quickly proved to be a breath of fresh air with “The Big Payback.” There had been women in the rap game who talked smack about men (it’s what made Shante famous after all) but this was entirely different. On “Payback” Choice viciously dissected the top male rappers of the late 1980’s and early 90’s, using the kind of frank profanity rarely heard from women in the game at the time. Here’s a sample of what she said about Eazy-E:

“Talkin’ ’bout who you screwed
Boy you ain’t had pussy since pussy had you!
You say you never licked it, now that could hold up
Cause you’re too busy looking for a dick to suck!
I’ll take your mic and fuck it up ‘Boyz’
Throw your asses around like a God damn toy
You wear the curl like you’re so damn live
Look like a soul brother, motherfuckin Jackson 5″

This is only the START of her trash talking. She runs down the entirety of N.W.A, rips on her own labelmates the Geto Boys, then tells Too $hort he’s “got a big ass head like a Kool-Aid jug” and claims “I wouldn’t fuck your ass with a bag on your head.” It’s a savage beatdown. She describes him as “rapping for eight years and sounding like zero” on the track. Other than MC Pooh I’ve never heard anybody go at $hort that hard, and quite frankly he should have taken lessons from Choice on how to do it the right way. It sets the tone for the album right away and she doesn’t let up on “I Got My Own.” Kim informs us that “momma didn’t raise no prostitute” and “I don’t need nothing from a man but a God damn bone.” Choice is I-N-D-E-P-E-N-D-E-N-T, do you know what I mean?

It may not seem like a revelation in rap compared to today’s female artists, who now freely talk as much or more shit than the men in the game, but Choice stood out so much that Rap-A-Lot put the warning “VERY EXPLICIT LYRICS, PARENTAL GUIDANCE IS SUGGESTED” right on the cover. You could argue it was a form of enticement to play her up as a provocateur, but it wasn’t inaccurate to suggest parents who found 2 Live Crew or N.W.A too profane would be upset by Choice. Speaking of the Crew, “Minute Man” sounds like a response that shows female agency in sexual relations. It’s pretty hard to “Pop That Pussy” if you bust a nut a minute into intercourse and Choice just ain’t having it. If your dick game sucks, get the fuck out.

Does that seem too bold? Not hardly. Artists like Lil’ Kim can trace direct lineage to Choice’s unapologetically discussion of sex from a woman’s perspective. It’s not a one time “choice” either as Davis continues to put forth female empowerment in her own distinctive way. She warns women not to be known as a “Back Seat Betty” who gives it up in cars at the drop of a hat. She derides men who claim to be “Mr. Big Stuff” but have a “little ol’ dick the size of a thumb” who “couldn’t make a virgin cum.” You’d better be ready to go down South too. “Cat Got Your Tongue” huh? Not in her world.

Choice has never been given the credit she deserves for the trails she blazed on “The Big Payback” and it’s long overdue for her to get the props. I don’t want to hand out the laurels without one important note though, and if it can be said of the men of the era then it should be fair to call out the women who do it too. There’s some pretty blatant homophobia on the album version of “Payback” that was toned down for the single and music video. I appreciate the confidence she had dissing the biggest male stars in rap music, but I hope she’s less than satisfied with using “fag” to describe them. I realize in the spirit of trash talking anything was fair game, and it certainly makes her equal to the men of the era doing the same, but what good is equality if it comes at the expense of holding others down? If you can put that aside “The Big Payback” is still a historically important album that deserves more respect than it got then or even now.