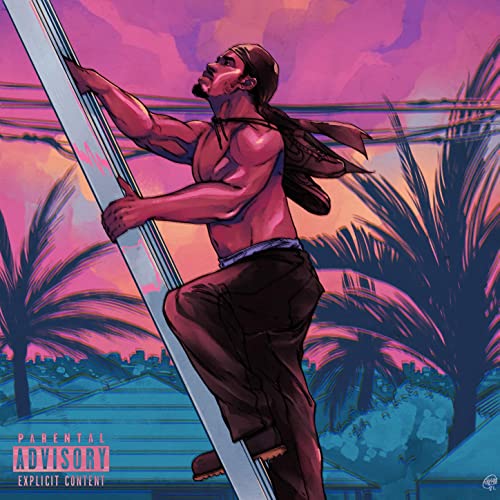 Sylvan LaCue f/k/a QuESt has been on the rap scene since the late 2000’s, but according to his own bio he nearly quit in 2011 when his father nearly ruined his life. LaCue was trying to do pops a solid by letting him stay with him after he got released from prison, but six months later they wound up being evicted. It was at that point he moved to San Diego, joined Visionary Music Group, and started his career over with the well received “Searching Sylvan” release in 2014. The truth is that I’ve never heard it, even though he was allegedly one of “11 rappers you need to know” in a Huffington Post editorial that year. “Young Sylvan Ep. 2” is my first exposure to him at all.

I think that goes to show you just how crowded the music scene has become in the internet age. I’m going to pull back the curtain a bit to tell you something — I get emails and social media messages telling me how few active review sites there are on a recurring basis. I imagine burnout is part of the problem, because the mountain of new albums never stops growing taller, and struggling to climb it knowing you’ll never reach the summit is a Sisyphean task that breaks even the most dedicated writers. Aspiring rappers unintentionally compound the problem because they are so hungry for even a morsel of coverage they relentlessly hit up every blog, writer, social media outlet and industry connected person they can to get coverage.

I don’t know if it’s to Sylvan LaCue’s credit or deficit that he’s not one of the pestering people desperate to be noticed. On “Young Sylvan Ep. 2” he’s clearly not worried about chasing fame though, which is to his benefit when he makes heartfelt songs like “PS2” featuring Grandmaster Vic. If you expect him to brag about how big his cars are, how flashy his jewelry is, or how blue his money is, you’re going to be disappointed by the song. For me it’s far more relatable to hear him talk about his mental health, playing video games as therapy/distraction, and how “it’s fucked up when you can’t trust yo’ friends.” Even though he’s doing better these days and the confidence in his delivery reflects it, he’s not putting on airs about it or lording it over the listeners. Over his antagonists? Maybe a lil’ bit.

“I’ve been livin life in recluse
My momma fear that I might need me a noose
I used to wanna be the best in the world
Until I found out I’m already the truth
When I was twelve I played the PS2
Saving money for a new sweatsuit
Shit, round the same time Nelly dropped +Sweatsuit+
They gon’ let me in, nigga who let you?”

This is part of what keeps me from experiencing burnout. Instead of looking at the mountain and deciding I’ll never reach the top, I’ve decided to rotate the perspective 90 degrees. I’m not going up, I’m moving forward, and at any point along the way I can stop to smell the roses and appreciate what’s really good. Perhaps LaCue is playing to my interests with video game and pro wrestling references with a song like “Bowser in the Sky,” but he’s also making clever hip-hop references too. “Like ’96 Master P, +I Got the Hook Up+.” He’s rapping like a hyperlinked Wikipedia entry himself, daring you to unpack the references you don’t know, making you smile at the ones you already do. Roses. After walking through desert dying of more thirst than Sticky Fingaz, I hit a lush garden free of AutoTune and Percocets.

I’m not going to tell you Sylvan LaCue is the new greatest thing, especially since somebody already did that seven years ago. In fact the outro of this release has his narrator telling people “Young Sylvan doesn’t give a shit what you think about this album — unless you believe it’s the best album you’ve ever heard.” Fair enough. I’d be lying if I told you it’s the best ever, so I fully expect him to give no shits and no fucks what I say here. He’s definitely talented, and “Young Sylvan Ep. 2” stands out in a vast field of mediocrity and banality, but that doesn’t make him better than Rakim, Aceyalone, Gift of Gab, Pharoahe Monch, Illogic or Scarface just to name a few. The honest truth is I like Sylvan because he doesn’t care who likes him. That gives him the artistic freedom to speak his own truth, and that makes him good. Not the best rapper ever, and not the best album ever, but still — he’s good.