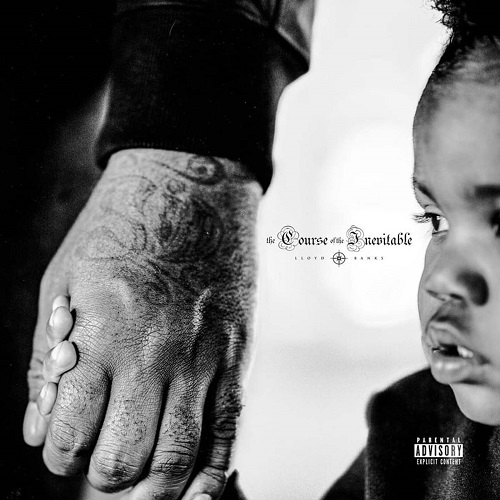 Lloyd Banks :: The Course of the Inevitable

Former G-Unit member Lloyd Banks has been building up to this moment. Since the G-Unit mini-reunion in 2014 gave fans a glimpse of what the triumvirate could sound like in modern times, Banks has consistently put out mixtapes each year since, albeit to little fanfare. 2015 saw “Halloween Havoc 2” followed by “Halloween Havoc 3” (obviously) the year after. “Respect My Name” emerged in 2018; a brief, self-released 7-track EP along with the “All or Nothing: Live It Up” mixtape.

Some guest appearances via Conway the Machine and DJ Kay Slay kept his name familiar in recent years, but “The Course of the Inevitable” has been welcomed as Banks’ comeback album by most fans. The whole Griselda movement has steered ears back to street spitters like Ransom, Willie the Kid, and now Banks, but you have to wonder where fans were in the interim. Nobody was checking for the aforementioned Lloyd Banks mixtapes, so what makes this any different? Well, you’ve got some notable guest features for one, which is certainly what brought this record to my attention.

“Empathy” plods nicely with a solid Freddie Gibbs feature, and boasts an impressive third verse from Banks; something he promptly usurps on “Early Exit”:

Unfortunately, it’s let down by an uncharacteristically rough Roc Marciano verse, that sounds like it was recorded in an underground bunker. Echos all over the place, reminiscent of the Jay Electronica verse on PRhyme’s “To Me, To You”. It’s the lone disappointment, as Styles P, Ransom, Benny the Butcher and Vado all play their part. Considering the level of emcee on display, Banks never gets outshone; in fact, the only thing that steals his spotlight is the opening song “Propane”, purely because the beat from Encore is NASTY. If radio freestyles were still a thing, this would be the modern-day “Broken Language”, with more than a hint of the Detox-era Dr. Dre about it.

I like how honest Lloyd Banks is on “The Course of the Inevitable” as he admits his strength being a potential weakness on “Food” as he states “90% of my songs gloomy, I’m bar-heavy”. He knows what he is and doesn’t fall into the trap the likes of Jadakiss and Saigon do by continuing to include a track for the ladies, or a track designed for radio. There are no “Hands Up” or “On Fire” equivalents crafted to lure in more casual listeners. He acknowledges his status as a respected lyricist boasting a tough, gruff style that maybe never fulfilled his potential to solidify the name Lloyd Banks with greatness. We have seen glimpses of course, and he was always the most gifted in G-Unit when it came to constructing a killer verse, but “The Course of the Inevitable” is the confirmation any doubters needed. With no compromise, Banks is the sharpest he’s ever sounded. This is acknowledged on the Benny duet, “Formaldehyde” as Banks states he’s “got better” whilst channeling his 2009 self, just as Benny states his dominance in 2019. A decade separates them but they sound more natural together than Young Buck ever did with Banks. There’s no sign of G-Unit on this record given Banks left the group in 2018, but the hook on “Break Me Down” is straight out of 50 Cent’s locker. It’s something that perhaps Banks has that this generation falls short on – a knack for a great hook.

That’s not to say that this album is as good as it could have been. At 67 minutes duration, the album is overlong and streaming numbers (on Spotify) prove listeners drop off halfway through. With such a strong start and piling in the big-name features in the first half, Banks’ does his best to maintain the listener’s attention in the latter thirty minutes but, ironically, by making this album 100% gloomy and bar-heavy, it highlights the need for that 10% to break up inevitable monotony. Some better engineering and streamlining of the tracklisting would lift this to instant-recommendation levels but receiving a great Lloyd Banks album is more than enough for any rap fan.