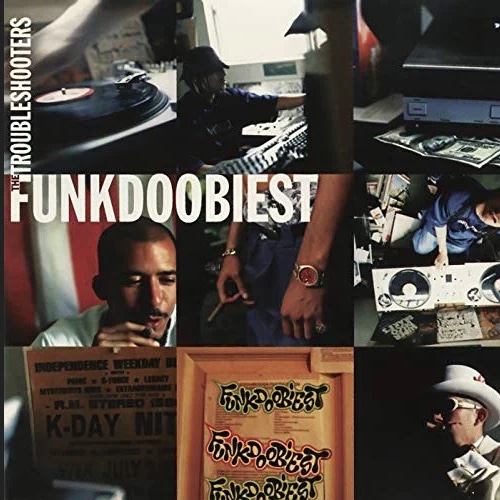 If you’re a Funkdoobiest fan you can’t help but notice a few problems with “The Troubleshooters” right off the bat. First of all legendary producer DJ Muggs is nowhere to be found on this album, and if one man could shepherd Son Doobie through his awkward rap flow, Lawrence Muggerud was that man. Secondly even though Doobie was and always will be the sole recognized star of the crew, the prior two albums at least had the pretense of being a rap group thanks to Tomahawk Funk. Without his presence here this might as well be a solo Son Doobie album, although the lead single “Papi Chulo” attempts to cover that up through cameos. Daz Dillinger, Cobra Red and Nina Lares all lend their vocals to DJ Rectangle’s production.

I remember thinking at the time how weird it was for a rap song to sample the Squirrel Nut Zippers, but it’s also a song that couldn’t possibly exist without it. It’s the glue that holds together the seemingly random unrelated performances from everybody involved. This album needed much more adhesive. It’s an hour long and with Ralph M and Son Doobie responsible for most of it (on production and the mic respectively) it tends to drag a lot. There are some songs that quite frankly are unlistenable. I never need to hear “On the Premises,” the posse song “Life’s a Gamble” or the accidentally offensive “Five Deadly Indians” ever again.

I realize Son Doobie was trying to make a political statement with the track, but he doesn’t have the chops as a lyricist to pull it off and the hook is straight up awful. On the other hand when Son & Ralph find their groove (that sounds like the name of a sitcom) there are songs that shine. “¡Oyé Papi!” bounces like an Impala on hydraulics, “Stretchin'” features a guest appearance from Rakaa Iriscience and a dope minimalistic beat, and everybody loves the “Sunshine” right?

Even when everything clicks there’s still the issue of Son Doobie’s delivery. His rap style has always been stilted, halting, and seemingly punched in one word at a time. It’s not just the way he spits the syllables — it’s the emphasis he puts on them. I can’t think of any better example of what I mean than their tribute to old school hip-hop act Newcleus with “Act On It.” Son’s raps would shine a bright enough light on this problem on their own, but when Kam joins him for a guest verse, he’s exposed as a second tier act on his own song and album. Ouch.

At times Son Doobie’s bizarre rap flow can be enjoyed in short bursts, but having DJ Muggs and Tomahawk Funk to help carry through his weirder tendencies helps a lot, and their absence here really hurts this album. “The Troubleshooters” actually needed a few to save it, and they tried by loading this album up with guest stars, but it still would have been better at 30 minutes instead of 60+. As Teren Jones once said, “Emcees should know their limitations.”