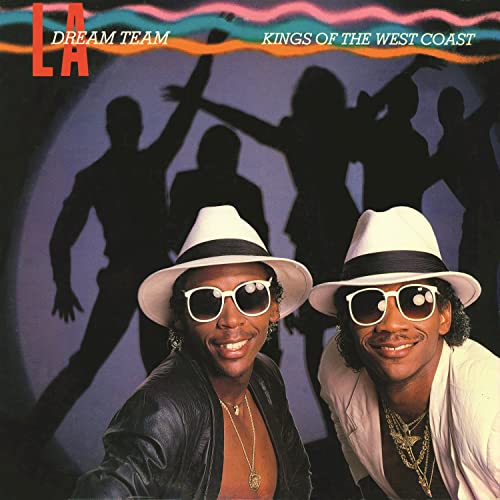 Kings of the West Coast

Let’s start this review with a funny clip from Beverly Hills Cop 2.

Eddie Murphy may be a Brooklynite, but that didn’t stop him from knowing about the L.A. Dream Team. Formed by Chris “Snake Puppy” Wilson and Rudy Pardee (R.I.P.) in the 1980’s, the group first broke into the mainstream with “The Dream Team Is in the House,” a song easily identifiable by its sample of televised cop drama Dragnet. I can’t tell you for sure if Eddie Murphy was scripted to say “yo baby yo baby yo” in the movie, but I personally believe that he improvised it on the spot based on this song.

Almost every song from their debut album “Kings of the West Coast” was released as a single, which isn’t hard when your album has eight songs and SIX are pressed to vinyl. They achieved varying degrees of success though, with “The Dream Team Is in the House” being one of their more memorable tracks. The other single that is usually brought up when L.A. Dream Team is being discussed is “Nursery Rhymes,” and while I can only find a few live performances of their first single, the second got a full blown music video.

“Old King Cole was a merry old soul/He wore Bally boots, and a neck full of gold.” They weren’t playing about the NURSERY RHYMES part. Long before 3rd Bass made a crossover hit sampling Peter Gabriel called “Pop Goes the Weasel,” L.A. Dream Team actually had a keyboard playing the actual childhood song for the intro and hook of this track. “Little Boy Blue go blow your horn/all the freaks are on the loose/Humpty Dumpty’s, not on the wall/He’s with his girlfriend Mother Goose.” 35+ years later it’s hard to imagine a rap group would want to be remembered for a song this corny, but the Dream Team hit right before N.W.A and Public Enemy redefined the rap landscape as we know it.

The influence of Afrika Bambaataa’s “Planet Rock” and “Looking for the Perfect Beat” can be heard all over “Rockberry Jam,” with the Dream Team imitating his distinctive futuristic electro funk and trying to put their own spin on it. If you think rappers copying whatever works for someone else is a modern invention of the Soundcloud/Spotify/DatPiff era, you’d be dead wrong, because people were jacking for styles long before Ice Cube was “Jacking For Beats.” The one they shouldn’t have jacked was quiet storm R&B for “You’re Just Too Young.” It’s not even a rap as much as it is a spoken word recital, but those words should never have been spoken at all.

“Hey baby, come on now, you know how I feel. I always said how beautiful and mature you are for someone as young as you.” If a rap song can be said to be CRINGE this is the one. I realize they were young men at the time, so this is probably an 18 year old talking about a 16 year old, but that’s still WRONG. If she’s “too young” and her parents “don’t even know” you’re together, then you SHOULDN’T be together. In the context of the era it’s creepy, and when you remove it from the context, it’s ten thousand times worse. The fact they released this as a single off “Kings of the West Coast” just blows my mind. Nothing about that was a good idea.

The further you get down the charts with the singles, the more tiresome the Dream Team becomes. While they are recognized as West Coast rap pioneers and deserve the credit for succeeding at a time when hip-hop was still being dominated by New York, you can’t ignore the fact they did so with the most basic of lyrics and the most recycled rap music styles. Whatever worked for somebody else is what they do — Whodini, Run-D.M.C., Afrika Bambaataa, Kurtis Blow, and so on. It would be fair to say everybody had to learn from or be inspired by someone, and all emcees of the 70’s and 80’s were style jacking from DJ Hollywood and Frankie Crocker to a degree, but they tended to iterate from the originators and add on something new. L.A. Dream Team were carbon copies, which is why their success was limited even as they tried to expand the group’s size after their debut. “Yo baby yo baby yo” just wasn’t enough to build a career on.