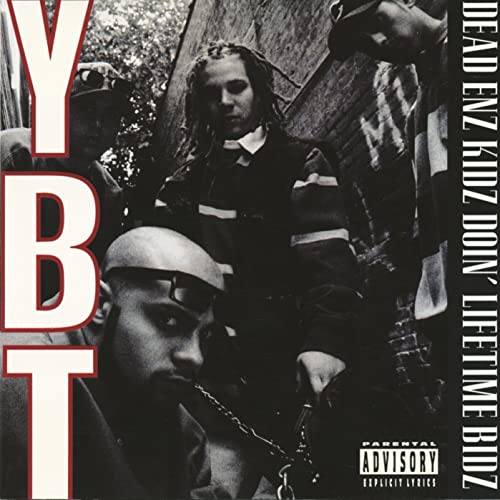 I don’t say the following words lightly — Young Black Teenagers may be the most offensive name for a rap group of all time. You might wonder why if this is your first time hearing of them, so a look at the video for their single “Pass the Bottle” may be useful.

If in the future the video is deleted or YouTube itself ceases to exist, let the following description of it suffice — this rap group consists of five white boys. No joke. Some record label A&R undoubtedly thought this was a clever idea. “Hey Joe, what do with these white rappers that we signed?” “Let’s call them the Young Black Teenagers. The contradiction will get people talking and they’ll become HYOOOGE stars.” The truly astounding fact is that when their self-titled debut album flopped, everybody involved in the project doubled down for “Dead Enz Kidz Doin’ Lifetime Bidz.” I don’t exaggerate when I say YBT’s first album failed hard — I didn’t even know of the group’s existence at all until “Pass the Bottle” came out. If it weren’t for the fact the Bomb Squad (Public Enemy) produced the second album it’s likely they would be completely forgotten by history. I hope they’re grateful.

I’m reminded of when R.A. The Rugged Man said the following words on the Demigodz song “Captain Caveman” — “I don’t just rape women, I rape whole countries, I rape cultures.” Now in R.A.’s case he was being purposefully self-deprecating for both the humor and the honesty about whitey’s place in rap music, even though he has a legacy in hip-hop that (ironically enough) extends all way back to before YBT’s sophomore album. There’s an argument that YBT sampling Rush’s “Tom Sawyer” on “Time to Make the Dough Nutz” exhibited similar self-awareness, but I credit that to both Bomb Squad producers G-Wiz and Keith Shocklee. If it was on purpose then they’re a couple of sly foxes, but none of that bleeds through to YBT itself. They are dead serious about these raps, and if we’re being honest, the song would absolutely suck if they weren’t.

That’s the ultimate twist to all this innit? The group has a horribly ill-conceived name and a misguided marketing campaign, but they’re so unironically sincere about rap music that it WORKS. They work in Cypress Hill references on songs like “On the DL” without it sounding at all forced: “Here is something you can’t understand… we can’t afford Timberlands!” The line makes me smile as does the booming Bomb Squad production. Hard bass, piano keys, and crunchy snares all mesh together with their rhymes in what I must admit is a dope track. Ignore the contradictions and the marketing and songs like “Soul Wide Open” are fresh. If they had been presented like the Beastie Boys or 3rd Bass, it would have worked.

Kamron in particular struck me as a rhymer with potential then and now, but he vanished along with the rest of the group when album number two fizzled. Well… not quite. We never heard from him, ATA, Firstborn or Tommy Never again, but DJ Skribble survived YBT’s demise and actually did quite well for himself. He became well known for his appearances on MTV, has released dozens of albums and produced scores of remixes. He achieved far more on his own than he ever did as part of the Teenagers.

The penultimate kick in the pants of “Dead Enz Kidz Doin’ Lifetime Bidz” is that I don’t hate this album. I hate absolutely everything about the “so clever it’s not” idea of taking five white rap artists and calling them black teenagers, but thanks to the Bomb Squad’s production and their genuine affection for hip-hop, it actually holds up on replay. I would have liked to see what Kamron could do as a soloist, but the stigma of YBT probably caused him to abandon any future plans in music, and that’s a shame. Despite the horrible name and concept, this is vintage 1990’s rap music.