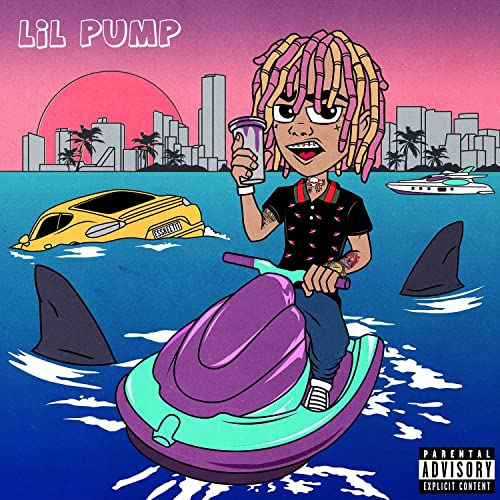 “My lean costs more than your rent (it do)/Your momma still live in a tent, yeah.”

“Gucci Gang” was the fifth and final single from Lil Pump’s self-titled album “Lil Pump,” but if you know one and only one song by Pump THIS IS IT. This two minute track has been certified platinum five times over, and the music video for it has been viewed over one BILLION times on YouTube. Let that sink in for a minute. Whatever your definition of viral is, whether it’s something being seen tens of thousands, millions, or even a hundred million times is, LIL PUMP SMASHED THAT and headed far beyond the stratosphere straight into the solar system. He could literally bank off that one song for his entire life. He was only 17 when that song dropped and already had a hit that for better or worse would define his whole career.

It feels absurd to talk about anything else on “Lil Pump” after that. Even the incredibly successful “Flex Like Ouu” single and video only did one-tenth the amount of success that “Gucci Gang” did. Producer Bighead even had a reason why he and Gnealz were able to take Lil Pump to such heights with just one song: “Simple music is good music, because if a three-year-old or a four-year-old can sing it, that’s what I aim for.” You can’t say that about a song like the Terrotuga produced “D Rose.” It’s a dark, dank, heavy bass track, and the hook doesn’t feature the memorable and easily imitated alliteration of “Gucci Gang.” He attempts to make it simple by saying “eighty on my wrist, hundred on my wrist, D Rose D Rose D Rose D Rose” over and over again, but it just doesn’t click the same way.

It should hardly come as a surprise that you can only capture that kind of lightning in a bottle once, or that when you become that successful before even reaching adulthood, the shit goes to your head in a very negative way. “Lil Pump don’t know how to act” is an honest statement on “Youngest Flexer” featuring Gucci Mane, which thanks to Bighead also has one of the best beats on the album. If you want so much bass on a track that you could overdose off the subwoofers, this is the song for you.

It’s easy to call Lil Pump a one hit wonder or dismiss “Lil Pump” as a one song album, but that’s not accurate. To start I have to give Lil Pump the credit he deserves for rapping on his tracks, because no matter how simplistic the bars might be on a song like “Foreign,” at least he’s not singing his way through them. I normally view super short songs as a deficit, but in Lil Pump’s case keeping his verses to a minimum allows you to enjoy the production of a track before his lack of anything to say becomes tiresome.

He also learned the lesson that when you don’t have a lot to say other than how much head you get, how much ice you wear and how much lean you drink, you might as well use guest stars to cover up your deficits. That’s why Rick Ross is a welcome addition to “Pinky Ring” and 2 Chainz improves “Iced Out.” How often has anybody said that a guest appearance by 2 Chainz made a song better? It’s ABSOLUTELY the truth here.

“Lil Pump” is such a cultural phenomenon it’s hard to write about without discussing how it changed the landscape, to the point of people blatantly imitating his look, his style, and his sound. It’s a cliche to say imitation is the sincerest form of flattery, but it’s the God damn truth here. Lil Pump became a huge superstar thanks to “Gucci Gang,” and even if the rest of the album it comes from is an afterthought as a result, at least it’s got enough interesting production to make it mostly listenable. Eventually Lil Pump’s lack of depth and basic ass repetitive bars will wear on you, but if you pick and choose songs off “Lil Pump” and listen to them in small doses, it’s far from the worst thing ever. Taking in the whole thing at once is too much but that can easily be avoided. Just make a playlist and throw a couple songs in it to get your Lil Pump fix.