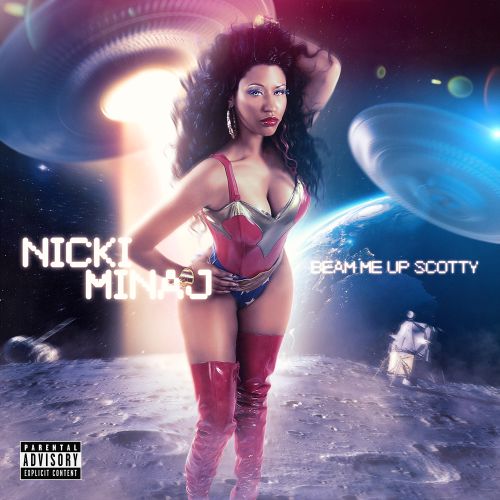 Beam Me Up Scotty

Nicki Minaj :: Beam Me Up Scotty

Nicki Minaj re-released her 2009 mixtape “Beam Me Up Scotty” this year with three new songs, a smart piece of marketing to keep her in the eyes and ears of fans as she comes off the back of having her first child. It had a smooth rollout and her marketing team must have thought they had got away with a quiet 2021, but Nicki had other plans. Recently making headlines for her anti-vaccine opinions and citing swollen testicles as a symptom, it follows a long line of rappers embarrassing themselves with their paranoid approach to science. Pete Rock, Busta Rhymes, and countless others within hip hop have echoed their distrust of vaccination programmes – there’s a great Complex article that explores the roots and reasoning behind this. I wanted to acknowledge this first, as the fact this was headline news across the world illustrates just how far Nicki Minaj has come in the space of a decade. This mixtape takes us back to where it all started.

The three new tracks are “Fractions”, a remix of “Crocodile Teeth” and a collaboration with Drake and Lil Wayne called “Seeing Green”. Putting them at the start of this record is a great idea, but probably fooled some listeners into believing this is a new album entirely. Weezy’s COVID-related rhymes will raise a smirk as he states he’ll “put you six feet deep, now we’re socially distant” while Drake claims to be the GOAT whilst dropping suspect lines like “I’ve seen more plaques than toothbrushes”. Nicki actually comes out best and proves how potent her style is when it comes to dropping bars. “Fractions” is a dreary trap offering and “Crocodile Teeth” is a chilled dancehall effort that shows Nicki can rap over pretty much anything.

The rest of the mixtape is solid and may find favour with fans that grew up through the late 2000s given it leans real hard into what was popping at the time. “I Gets Crazy” holds up, with that Ron Browz throwback stutter that was popular on 50 Cent’s “I Get Money” – the song title is clearly a riff on it. You can already hear the pop appeal of Nicki on “Kill Da DJ” with some melodic rhyming akin to blockbuster efforts like “Moment 4 Life” that was just around the corner.

Shoehorning the monstrous hit that is Drake’s “Best I Ever Had” on here with a Nicki verse is cheeky, but smart marketing that clearly paid off. Nicki’s singing ability is better than you’d think too. It’s funny retrospectively hearing Drake say “my buzz so big I could probably sell a blank disc” after his latest album broke chart records despite poor reviews. The use of electronic bleeps and bloops on “Keys Under Palm Trees” is a preview of the huge dance hits Nicki would later have and there are many moments where you’ll see bigger, more famous examples of these tracks.

It’s not a classic mixtape, however, with nearly six minutes of “Gotta Go Hard” with Lil Wayne being too long and the Autotune effect on Nicki’s verse is completely unnecessary. Her voice is her biggest asset and when Wayne comes in crystal clear it makes him look like the star vehicle. Although to be fair, Wayne was in his prime here so he was. The Nicki Lewinsky gimmick hasn’t aged well, nor have the awkward spoken skits, but much of this mixtape holds up. Nicki sounds so young on both “Still I Rise” and “Itty Bitty Piggy” despite being twenty-seven at the time. I’m sure a Nicki fan may confirm if these songs are older, but the flow, the change in accent, the goofiness of the delivery, it’s all here and fully formed. It’s not surprising the excellent “Pink Friday” emerged a year later.

The precision of Nicki’s timing on tracks like “Envy” is borderline robotic – which when coupled with the stutter and Autotune you begin to realise that Nicki may have been pushed and promoted by the machine, but she is a machine herself and more technically astute than she gets credit for. The style hasn’t changed in over a decade, but it never needed to. Nicki is distinct and while the songwriting and craftsmanship have been polished to perfection since 2009, that background as a thoroughbred bar-spitter that brought her attention initially is the backbone to her continued success and why she’s genuinely one of the best emcees to ever do it. “Beam Me Up Scotty” is a welcome reminder of that.