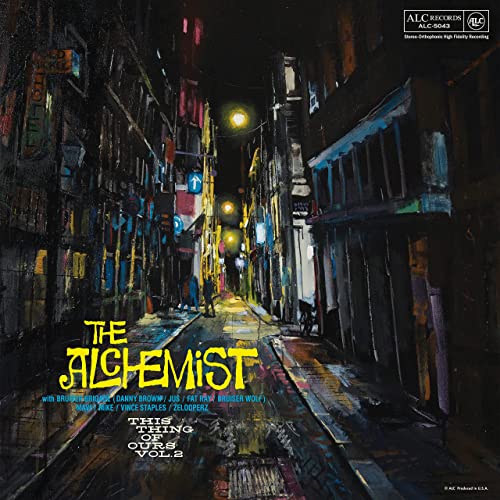 This Thing of Ours 2

The Alchemist :: This Thing of Ours 2

I wish “This Thing of Ours 2” was 20-30 minutes longer. Even if you combine the songs (not the instrumentals) from “Ours 1” with the songs from this album, you’d still wind up with under a half hour of material. As a long time fan of the production from The Alchemist, I could use a whole lot more of him collaborating with rappers than this. Even when he does full projects with just one emcee, they tend to be EP length too. If Daniel Alan Maman is trying to send us a message with these snack sized meals, it’s “Be grateful for the bites. I could have fed you nothing and left you starving.”

Fine. I’m grateful to hear Vince Staples on “6 Five Heartbeats” even if it’s only 1:54 long for two reasons — he’s still an underrated rapper, and Alchemist gave him an extra luscious instrumental to flow over. Softly tapped snare, tickled ivories, a barely audible singer that comes in randomly and gets reversed right as a stand up comedian performs his set. It’s poignant and haunting. It’s modern and timeless all at the same time. It’s everything that I expect from an Alchemist work in a very tight package.

The longest song on “This Thing of Ours 2” is “Flying Spirit” featuring Bruiser Brigade — a crew of Detroit emcees seemingly centered around the pimpish vocal tones of Danny Brown. You might expect a hard track for such a ruggedly named act, but Alchemist freely defies convention with the track. There’s no big bass beat and in fact there’s no percussion whatsoever. It’s left to the rappers to give you the tempo from their flow, and this skilled foursome take what’s on deck and run hard with it. Fat Ray shines here.

“Slick nigga, used to dine and go
Momma in my ear with that Q-Tip, now I got +Rhymes to Go+
Shit bumpin’ like a line of blow
Tryna grow the lemon cherry
I’m married to this designer smoke
This shit deep as a vagina go
Deeper than the minds of Minolta
Deeper than the audience on Oprah
Deeper than the bars I wrote to MF DOOM’s “Accordion” when I was on the sofa”

The measured delivery of MIKE on “Lossless” may best sum up this short release. He almost sounds drunk or stoned, but it’s a purposeful choice to mesh his delivery with the horns and vocals that Alchemist gave him. “Yo did you hit record? I gotta talk shit.” Yes MIKE, he did. The fact the video ends with ocean waves and a loud blaring foghorn is just par for the course with “This Thing of Ours 2” – lull you into a comfort zone and then smack you in the face. If you enjoy a producer who has clearly reached that “no fucks to give” point in his career where he’s so well established he can do whatever he wants, Alchemist is your dude, but the best thing about that is that he’s making good music his way whether or not it hits mainstream.

The Alchemist :: This Thing of Ours 2
8Overall Score
Music8.5
Lyrics7.5