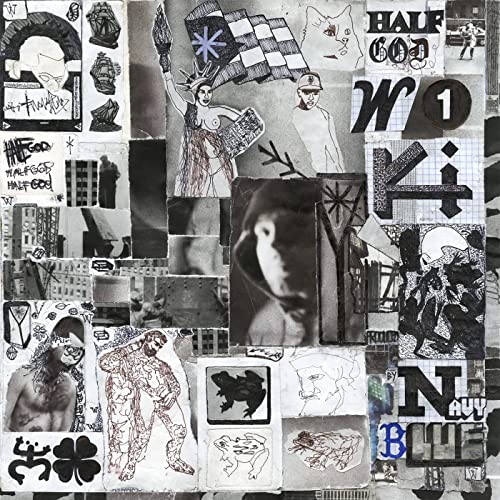 “Put a Wiki flag in the dirt and went to work.”

When trying to do my research for a “Half God” review I repeatedly came back to the Wiki-pedia page for Sage Elkesser, a skateboarder who raps and produces under the name Navy Blue. It’s clear the two are tight since Blue produced the whole album, even though Elkesser left Brooklyn for L.A. while Wiki stayed NY down and was one half of Ratking for a while. “Living in the Big Apple, isn’t it amazing?/But it doesn’t matter, nothing in this city’s sacred/I’m not gonna hate it — I tolerate it.”

For those not familiar with Ratking’s catalogue, which isn’t hard to imagine considering their short time together, Wiki is undeniably as NYC as the rooftop he looks down from. From his crispy lisp to his raspy vocal tone, he evokes the feeling of every Wu-affiliated rapper trying to chase the success and fame of the original Clan. Even branding himself “Wiki Da God” has the imprimatur of the Wu. “Say I’m a sinner/still a neighborhood figure/A fixture in my neighborhood until I’m gray and bigger.” I can’t think of a current day emcee less likely to abandon his birthplace than Wiki.

There was a day and time where simply branding yourself “NY ’til I die” and making grimy underground rap records could guarantee a certain degree of love and loyalty. There’s a collective loyalty amongst certain scenes in rap — the Bay supports the Yay, Houston supports H-Town, and so on. When Wiki say “this one’s for New York” in the opening of “The Business” it’s clear that he either (A.) believes this is his only path forward as a solo artist or (B.) has a nostalgic itch for the days of Kool G. Rap, Tragedy Khadafi and Big Pun (RIP) that he needs to scratch. I’ll hand him the back scratcher.

If there’s a downside to this approach it’s that Wiki has pigeonholed himself to appealing to a very narrow audience. Those who grew up with a diversified rap album portfolio bridging different territories may find “Half God” cool, while those who are Cali native and not Cali transplants like Navy Blue may vehemently reject it as “that New York shit.” It’s safe to say Wiki doesn’t give a fuck about that from listening to this album, because it’s a throwback to an era before social media where more people connected to the internet by dial up than broadband. Wiki is the rapper whose singles you’d buy from Sandbox Automatic back when physical music was still king. He sounds this way on purpose and he revels in being as targeted to a niche audience as he can possibly be.