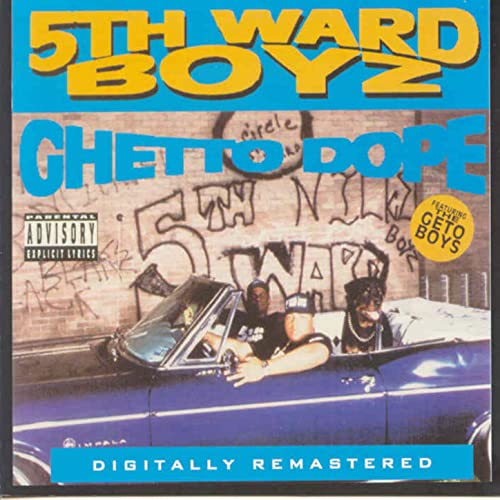 I’m a little perplexed as to why the 5th Ward Boyz never seem to come up when people reminisce about rap in the 1990’s. From my perspective they were the second most important act on Rap-A-Lot Records behind the Geto Boys themselves, and “Ghetto Dope” was the album that put them on the map nationwide. Although only two thirds of the group was present due to Lo Life (Richard Nash) doing a prison bid, I thought 007 (Andre Barnes) and E Rock (Eric Taylor) represented for him incredibly well. The first time I heard the album “Studio Gangster” featuring Scarface hit me hard.

The song couldn’t have been more timely. Hip-Hop was going through an internecine battle at the time, and not the East/West coast battle you’ve all heard about, but a generational battle with the O.G.’s who took a chance and put their hardcore tales on wax against the imitators who simply copied their work. As Brad and friends discuss on the song, the frauds were trying so hard to prove their authenticity that they were overdoing it, letting bullets fly in every song and dropping more bodies than a global pandemic. Another thing that strikes me looking back on this album is that well before Biggie & 112 made it a hit with “Sky’s the Limit,” the in house Rap-A-Lot production team (Mike Dean, John Bido, N.O. Joe and James Smith) had already looped Bobby Caldwell’s “My Flame” on “Bitch Pleeze.”

The best remembered song on “Ghetto Dope” though is “Thanks For the Blessing” featuring Bushwick Bill (R.I.P.) and Devin the Dude. It was one of only two songs to make it off the album as a single, and the only one that I ever remember seeing a music video for. For a group whose reputation was being the hardest rappers on Rap-A-Lot not named Bill, ‘Face or Willie D, this song is a surprisingly chill affair where every rapper takes a turn giving their praise to the Most High for the gifts that the Lord bestowed on them. That probably sounds corny on paper, but since they aren’t a Christian rap group, it has more credibility and relatability coming from these G’s.

When I went to see if there was any coverage of this album on Wikipedia to reassure me it had been forgotten, I was stunned to see the only review gave it 1.5 stars out of 5. Were we even listening to the same release? I could be wearing the rose colored tints of nostalgia right now, or I could be such a mark for the Rap-A-Lot Records of my youth that I give it more credit than it deserves. I don’t feel the same way about ALL Rap-A-Lot releases though, and some were downright disappointing when released and haven’t aged to become any better. Songs like “Undercover Gangstas” still thump though. It’s like H-Town’s very own version of G-Funk. “I’m saying fuck the government and I’m saying that shit loud!” Hell yeah.

My conclusion after listening to “Ghetto Dope” again nearly 30 years later is that the haters must have felt they were shameless clones of the Geto Boyz and gave them no respect because of it. I’m not going to deny the similarity between them, but I put that down to being on the same label with the same producers, all coming from the same ward in Houston, Texas. That sound and those accents are classic in my book, just like slow rolling songs like “5th of Ghetto” and hardcore anthems like “Punks and Guns.” The latter is almost anti-gangster, with 5th Ward seemingly tired of the endless cycle of black on black crime, looking not to celebrate the violence but call for an end to the bloodshed. Maybe a gangster rap group that’s willing to praise God in one song and call for peace on another was just too forward thinking for their contemporary critics. For me “Ghetto Dope” lives up to its name though and deserves another look from the masses.