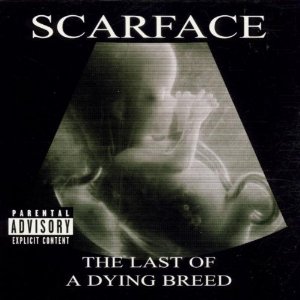 Scarface :: Last of a Dying Breed

Accolades can be tossed around a dime a dozen in the rap world these days. After 25 years of hip-hop and 10 years of rap dominating the charts, any number of people can be called “entrepeneurs” or “pioneers” or even “legends.” Overusing these terms tends to taint their value and makes acquiring their title ring false. Perhaps this is why Scarface has never been truly recognized in the rap world; and this writer is just as much to blame.

Mr. Brad Jordan is one of those rare few men who wield as much power behind the microphone as in front of it, and his accolades are among those that are rightly deserved. His successes in songwriting have yielded gold and platinum hits both with the Geto Boys and as a solo artist with songs like “My Mind Playin’ Tricks on Me”, “Money and the Power”, “I Seen a Man Cry”, “Homies and Thuggs” and most recently the Ruff Ryders smash hit “WW III.” His successes in business acumen have led him from his own vanity label on Rap-A-Lot Records to the presidency of Def Jam South; and he has introduced the rap world to artists like the 5th Ward Boyz, Devin the Dude, and Facemob. After half-a-dozen albums as a soloist +and+ his corporate acumen, Scarface can truly and accurately be called a “legend” in his own time.

Lest one get it twisted, being a legend doesn’t automatically exempt a rapper from having to make dope product. In fact if anything, being a legend raises the bar of excellence one has to reach in order to prove you deserved the props. Understanding this challenge, Scarface does not shy away from stepping into the ring to defend his belt. “Last of a Dying Breed” is not only the most definitive album Scarface has released in the last five years, it is possibly the best album he has released since his solo debut “Mr. Scarface is Back.”

The first thing people listening to (or reviewing) this album might misinterpret is the appearance of guest rappers like Kurupt, Jayo Felony, Bun B, and Jay-Z. Whereas Scarface’s “My Homies” album was more of a compilation of guest artists with minimal appearances by Mr. Brad, this album’s guests are clearly used ONLY to compliment or enhance – never outshining the star himself. Scarface is a “slow flow” rapper whose voice deep baritone has only gotten more resonant over the length of his rap career. Unlike many of his contemporaries from ALL coasts, ‘Face has a clear diction with a smooth drawl. There’s no lisping or mush-mouthing by this rapper, which makes even average lyrics better and good lyrics sound outstanding.

“Look Into My Eyes” is an example of Scarface at his best. “Time for me to pay, for all the wrong I did/I forgot to repent fool, when I was just a kid.” Scarface is haunted by the DEA, by jealous crackers, and his warning to fellow rappers is “the FBI been watching you.” Despite trying to leave his dope dealing days behind, ‘Face continues to be chased even though all he does now is make music and put out hits. Even if you’ve heard the tale told before, few tell it as well as Scarface. The charisma, the lyrics, and the ability to paint a vivid picture of his life put Scarface in a league all his own, and the surreal beat with (YES) timpani drums is dramatic enough to make the song a complete package.

The only real conceit Scarface has on this entire album is to release “Down With Us” – his own updated version of the Boogie Down Productions classic “I’m Still #1.” Somebody might have told ‘Face that four of five people have already tried, including B-Real on the “In Tha Beginning” compilation. Why bother though? Bun B’s guest rap is smooth and funny, and Scarface’s verse is sharp as a ginsu knife on the attack.

“I’m the original,
That bullshit I heard on your disc was pitiful
I’m critical; nigga I ride around in houses
My records doin millions, you barely do a hundred thousand.”

In his lengthy career Scarface has done a rap song from every point of view imaginable – he even once rapped as a ghost standing over his own corpse on the classic “I’m Dead.” You shouldn’t be surprised then by the versatility he shows throughout. Songs like “Sorry 4 What?” dig deep into his regrets and in the “Conspiracy Theory” he’s constantly on the lookout for how a black man can be set up by his peers and foes. “Get Out” with Jay-Z is an indication how to avoid those traps and still floss, while “In & Out” with Devin the Dude takes some time to lay back and smooth it with the females. You’ll find every aspect of the thug life represented; with a strong tendency to avoid rap cliches or weak “got the gun I’m on the run” bullshit rhymes. By the time you hit this album’s “Outro” you’ll be left feeling you’ve heard an hour of Southern rap’s very finest. If this album is any indication, Scarface will be around ten MORE years as a label executive AND a dope rapper. Mr. Scarface IS back.