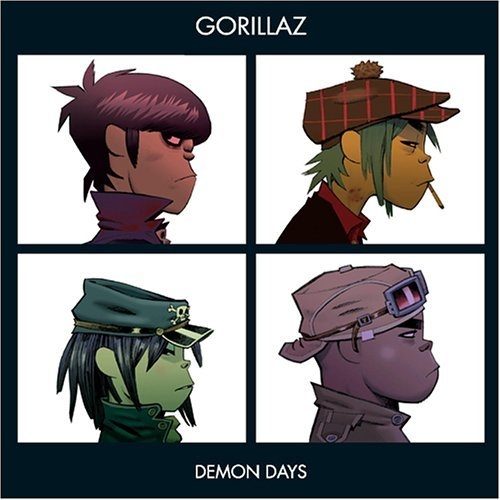 Hip-Hop fans by and large would not instantly associate the word “blur” with a UK power pop band. In fact the odds are they’re more likely to think it implies the mental haze one associates with too much of the sticky leaf, that same leaf the U.S. government is oh-so afraid of. Yet even if you think you’ve never heard Blur, you have and you don’t even know it. Say “WOO HOO” out loud. Say it out loud a few times in a row. Ring any bells? Perhaps you’re thinking of a brand new car, or maybe the Pentium chip inside a PC computer. In either case you’d be right because Blur’s “Song 2” became even more ubiquitous as a commercial jingle than it did as a pop single. Perhaps because of or inspite of that success, Blur’s raison dâ€™Ãªtre Damon Albarn retreated from the pop scene into a world of musical mystery. With a rotating cast of guest stars for a band fronted by cartoon book anime characters from Jamie Hewlett (you may or may not know the name thanks to “Tank Girl”), Albarn created a group simply called Gorillaz. Their purpose may be inscrutable, but their blend of musical mayhem and “fuck you” hip-hop attitude has certainly made them pop culture stars in their own right. If you’ve heard any song by the “group” it’s probably “Clint Eastwood,” in which Del the Funky Homosapien played the role of guest MC while Albarn sang weird lyrics like “I’m useless, but not for long, the future, is coming on.”

History has a weird way of repeating itself. Even though Gorillaz became a sci-fi urban attitude animated escape for Albarn, his group away from his group led him right back to commercial jingles. When the sticker on the cover of your album says “As heard on the iPod commercial” as a selling point, it’s not a good sign. Even more ironic is the fact they don’t even mention WHICH song is heard on the “iPod commercial” in question, although on “Demon Days” you’ll find it’s track number six, a ditty entitled “Feel Good Inc.” Whether intentionally or not Albarn has found himself right back where he started, more recognized for a song that hawks some large corporation’s consumeristic products than for his own musical talents. If you have to go wrong in such fashion though, it feels good to know it was with “Feel Good Inc.,” a Gorillaz song that features none other than anti-mainstream heroes De La Soul. Like “Clint Eastwood” before it, “Feel Good Inc.” achieves that unlikely and yet highly entertaining fusion of crossover pop with words and flows from some of rap’s all-time top scribes. Even if you try to hate it because you’ve seen the stupid iPod commercial for the millionth time, you just can’t do it – it feels too good to hear Dove flow on the track:

Does it make sense? Not really, but you’ll still enjoy it. The Gorillaz are just as inscrutable as ever, with Albarn crooning these words: “Let’s turn forever, you and me/ Windmill, windmill for the land, is everybody in?” Trying to decipher their meaning or intent defeats what seems to be the Gorillaz true purpose – they DON’T want you to find the man behind the curtain. Perhaps then it’s only appropriate they would collabo’ with hip-hop’s man of a thousand faces, the best known of them being Metal Face (MF) Doom. His drunken maniac off and on attack has made him a cult favorite everywhere from underground rap to the late night animated “Adult Swim” block on Cartoon Network, and he’s no less bugged out on “November Has Come”:

“Loaded hip shooter, draw for the poor
Free coffee at the banks, hit through the straw
None more for me, thanks
That blanks the raw, that dank sure stank lit
Sank passed the pit for more hardcore prank spit
Crank it on blast, roll past Front Street
Blew the whole spot like some old ass with skunk meat
These kids is too fast, juiced off a junk treat
Who could get looser off a crunk or a funk beat?”

The Gorillaz trip in and out of hip-hop at will, adding urban music guests who blow or producer at will. You’ll find Neneh Cherry on “Kids With Guns,” Pharcyde’s own Bootie Brown on “Dirty Harry,” and Roots Manuva on “All Alone” among ohers. It’s not strictly a hip-hop project, but it has a lot of hip-hop attitude. The pounding electronic noise beat of “White Light” would be at home in any DJ’s mix, the electronic swing funk of “Dare” sounds like a roller rink dance party on acid, and there’s something weirdly compelling about hearing Dennis Hopper narrate a story over the chunky beats of “Fire Coming Out of the Monkey’s Head.” Yes THAT Dennis Hopper, the one who has played villains in more Hollywood action flicks than you can shake a stick at. Did they borrow him from P. Diddy after the video shoot for “Victory” was over? Who knows, who cares. The Gorillaz are content to be enigmatic caricatures of real people, even though we know Blur’s Albarn and hip-hop superproducer Danger Mouse are the geniuses pulling strings behind the scenes. In fact it’s those very beats by Danger Mouse that make “Demon Days” a winner, even when the Gorillaz concept threatens to overwhelm itself with pretentious twaddle. At their best this “group” doesn’t take itself too seriously, and neither does DM, a man many know best for blending Jay-Z and the Beatles together on “The Grey Album.” He’s got much more than that to offer though, and while we’re all looking forward to his collaborative album with MF Doom in the fall we can take the time to “Feel Good” about his work with Albarn in the present. Call it pop, hip-hop, urban, electronic, or all of the above – the one thing you can’t call “Demon Days” is a bunch of Gorillaz making nonsensical noise. They’ve got voodoo, but you won’t run from the magic of these Gorillaz in the mist.