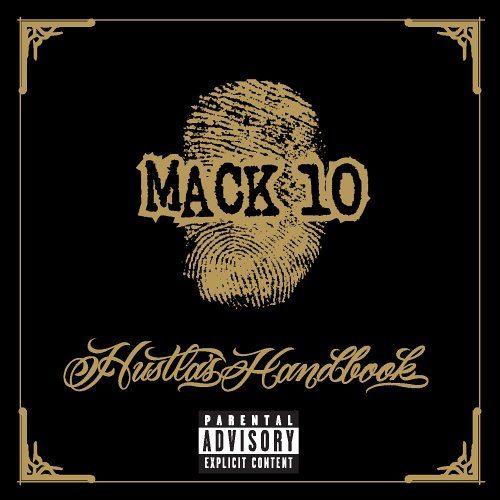 Some praise for Mack 10 – he’s been in the rap game for over 10 years. He’s part of the Westside Connection, arguably the most successful “rap supergroup” from the West coast. He’s had several popular hit singles over the years and was even married to that hottie T-Boz from TLC for a while (she filed for divorce in 2004 – status currently unknown). That being said you could also damn Mack 10 with faint praise. He’s been around a long time, but he’s never had overwhelming success. He has hit singles and a few memorable songs, but he’s never released an unqualified classic album. Unable to find a niche in the music industry he has bounced from label to label over the years, even being signed toCash Money Records for a time. And despite his best efforts to be a music mogul, compilations like “Ghetto, Gutter & Gangsta” generally succeed in convincing the public there are much weaker West coast rappers than Mack 10, and that we’d much rather hear from him instead.

“Hustla’s Handbook” is the first album in years to truly alleviate the latter concern. Although there are a heavy number of guest artists throughout the 16 tracks of this CD, most of them are clearly playing a support role rather than being the stars themselves. This is perhaps most true of the opening track “Like This,” with the quintessential hook provider Nate Dogg lending his hip-hop crooning to Mack 10’s rugged self-assured raps:

“Yo peep the way I do shit, I’m young fly and flashy
I’m so L.A., so hood and so classy
Lookin fo’ dat good stuff don’t hesitate to ask me
Bet I got what you need so be sho’ to run it past me
And just in case it’s on, keep the blue steel and chrome
My niggaz hopped in a Brougham with khaki suits on
And we real with it homes, these rap niggaz is clones
Fuck around with Mack Dime and get one in your dome”

Mack’s lyrical content has always walked the fine line between hardcore bravado and gangster cliche yet largely succeeding due to his breath control and very charismatic delivery. Unlike some of his less talented contemporaries, Mack has the presence of mind to change up his flow and delivery to suit the style of the beat he’s rapping on. For Young Soprano’s “Da Bizness” he’s appropriately slow and somber. For the Fredwreck laced “Step Yo Game Up” featuring B-Real he’s appropriately edgy and menacing. He even sound a bit East coast in his use of rhyme style and choppy flow in the Bruce Waynne swanger “So Gangsta” featuring Butch Cassidy, a smooth song with an Isaac Hayers sample and definite crossover potential:

“The Mack is back! It’s a rap, it’s a fact I
holds it down from the trap to the track I
got shakedown up top with them straps
Plus the hood on post, we good on both coasts”

The weakest link for Mack 10 on “Hustla’s Handbook” turns out to be the guest rappers. While it’s true that they play a support role instead of being the stars like on previous Mack 10 compilations, over time their presence starts to wear you down. Four straight cuts on the album feature either Skoop Delena or Young Soprano, and while there’s nothing excessively bad about either they also don’t have anything to write home about; the latter in particular would be better served to keep banging out beats for the Chickenhawk Mack One-Oh’s flow. Mack 10 also tries to introduce us to his “midwest homies” on the song “I’m a Star” but they don’t sound anything like stars at all. Ruka Pupp in particular seems to be ripping off Lil’ Jon in style and flow, and we all know Jon only skates on his shit because he provides his own fat fuckin’ beats – Pupp doesn’t. At some point you feel like his guests ran a computer program to randomly throw words together and make rap names: Bigga Brown, Bre Perry, Kanary Diamonds, et cetera. There’s no denying that 10 has some good songs with a few of these people though – he makes a dope track out of “Cognac & Doja,” though that also has a lot to do with Young Tre’s beat and Butch Cassidy’s singing.

The album closes with another excellent Fredwreck and Mack 10 combination on “Livin Just to Ball” before throwing us the bonus track “Ride Out” with Chingy, which ironically is just as strong as anything else on the CD and doesn’t seem like a bonus track at all – the album would be incomplete and less interesting without it. “Hustla’s Handbook” shows that while Mack 10 may not go down as history’s greatest rapper, he knows what his strengths are and can play to them well. His biggest problem may simply be that he’s too generous in letting a lot of homies get down for the ride when the public would just as soon he hoo-bang tracks all on his own.